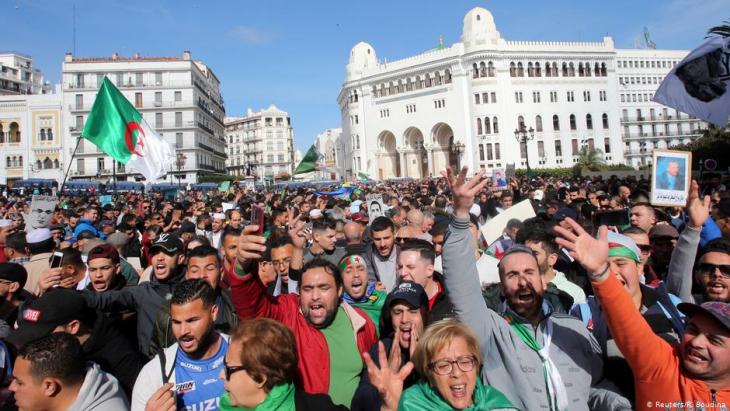 Algeria: how the Hirak fared in 2020
Protestors still calling for genuine democracy

Algeria has not found peace since Abdelaziz Bouteflika, who was president for 20 years, resigned under massive public pressure in April 2019. On 1 November 2020, the government held a constitutional referendum to end the political crisis. But things did not work out as it planned. On the contrary, the rifts between the regime and the pro-democracy movement have deepened further. The opposition now wants to use the momentum from the latest wave of protests to better organise itself. By Sofian Philip Naceur

In seeking to amend the constitution, the Algerian government was trying to take the steam out of the protest movement, which is generally referred to in Algeria as the "Hirak" (Arabic for "movement"), fobbing it off with cosmetic reforms. The increasingly authoritarian regime hoped to acquire legitimacy and put the Hirak on the defensive. That attempt has failed.

Though the constitutional changes were approved by 66.8 % of those who took part in the referendum, turnout was at an all-time low of just 23.7 %. And even that figure may have been embellished. It is well understood that elections have been systematically manipulated for decades in Algeria, but the government failed to take steps to reform electoral law that would have ensured a transparent vote in the run-up to the 1 November referendum.

On polling day, the majority of Algerians thus simply ignored the ballot. Instead of queues outside polling stations, there were protests, biting satire and even assaults on polling stations. Demonstrators set up trash cans with slits for voting papers and symbolically tossed hand-made ballot cards into them as garbage in eastern Algerian towns and the traditionally rebellious Kabylia region – a Berber-dominated opposition stronghold east of Algiers. Peaceful protests took place in numerous towns and villages. In some places, however, demonstrators stormed polling stations and dumped or set fire to ballot papers on the street. In the face of the protests, authorities actually aborted the electoral process in uncounted municipalities in eastern Algeria. 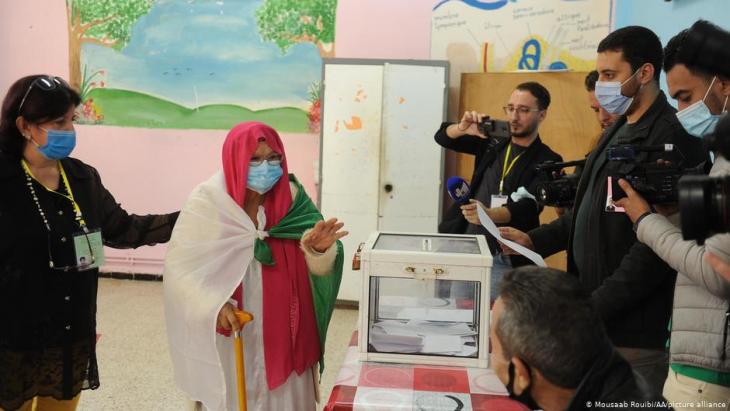 An elderly woman draped in the Algerian flag casts her vote in the Algerian constitutional referendum on 1 November 2020. The Hirak had called for a boycott of the referendum. Ultimately, turnout was at an all-time low of just 23.7 %. According to Sofian Philip Naceur, "While civil liberties and a ban on censorship are now enshrined in the new constitution, [...] the government showed in the run-up to the referendum that the 'guarantees' are not worth the paper they are written on"

A shot in the arm for the Hirak

The electoral disruptions came as no surprise. Many close to the Hirak had called for a boycott of the referendum. Indeed, the successful boycott campaign is a ray of hope for the activists. For the first time since March, when the Covid-19 pandemic set in, the movement started once more to attract significant support.

The Hirak's glory days were in early 2019, when hundreds of thousands of demonstrators marched almost daily through Algeria's cities, demanding Bouteflika's resignation. He had been in office since 1999. When he did step down in April 2019, the regime remained in place however. The army took de facto control, though, under pressure from the streets, it did arrest and put on trial dozens of people who had belonged to Bouteflika's inner circle.

It fast became clear nonetheless that the army was not going to fulfil Hirak demands for genuine political openness. Instead, it used the crisis to clean up its own ranks and purge the Bouteflika faction from the corridors of power.

Since then, the regime has been trying to appease the protesters without responding to calls for real democracy. And yet, the Hirak has proved extremely tenacious, having learned lessons from Algeria's past as well as from failed uprisings during the Arab Spring of 2011. For example, the Hirak consistently disowns violence. Facing peaceful protests, the regime could neither use brute force nor discredit the movement. Nonetheless, the authoritarian officeholders stubbornly clung to power. In early 2020, the country was heading for deadlock.

A new president, Abdelmajid Tebboune, was "elected" in December in a ballot clouded by charges of manipulation. It is an open secret, moreover, that Saïd Chengriha, the powerful army chief of staff, is pulling the strings. Both were soon reiterating mantra-like demands for a constitutional referendum, suggesting it would lead out of the impasse. Chengriha declared over and over again that it would be a crucial step towards building a "new Algeria". The government tried to sell the proposed constitutional amendments as a concession to the Hirak and the opposition in general. The truth, however, is that those changes do not mean serious reform.

Yes, the new constitution only permits the head of state to stay in office for two terms. It also strengthens the role of legislators. However, the president still has the power to choose and appoint senior judges and thus retains considerable influence over the judiciary. While civil liberties and a ban on censorship are now enshrined in the new constitution, moreover, the government showed in the run-up to the referendum that the "guarantees" are not worth the paper they are written on. Activists, members of the opposition and journalists continued to be systematically detained. Many were dragged before the courts on bogus charges.

The Pact of the Democratic Alternative, a centre-left opposition alliance, stated that this latest wave of repression against members of the opposition amounted to a "crusade by the regime against freedom". Accordingly, the government's assurances of human rights and civil liberties being respected in the future are unconvincing. 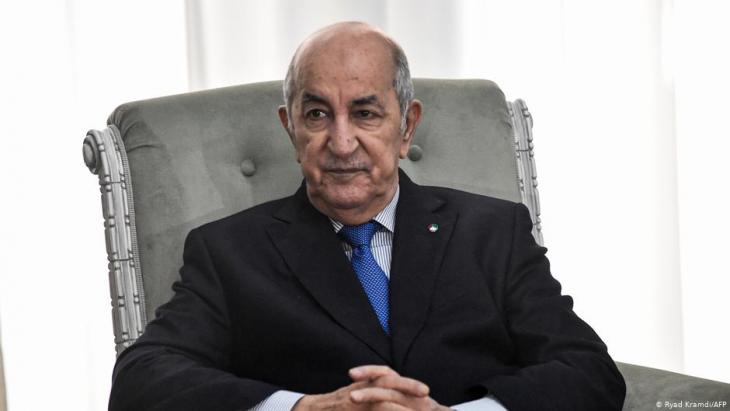 The trust of Algerians in their leadership was further eroded when President Abdelmajid Tebboune (pictured here) was hospitalised in Germany on 28 October, meaning he was absent for the referendum. Algerian authorities later announced that he had Covid-19. However, his prolonged absence and the sparse information about his condition reminded many Algerians of Bouteflika's frequent hospitalisations abroad and fueled speculation as to whether he would be able to finish his first term. Many doubted the official line that he was suffering from Covid-19. He returned to Algeria on 29 December

Back with a new initiative

In view of the coronavirus crisis, the Hirak had dwindled, and, ahead of the referendum, it was no longer the impressively powerful force it had been in the first months of 2020. Now, the tide has turned. The regime used the pandemic as an excuse to take increasingly repressive action against the Hirak. That has now backfired, with opposition to the referendum swelling the ranks of Hirak supporters again.

The Hirak intends to strengthen its arm even more in the coming weeks. It has launched a new initiative, "Nida22", aimed at finally convening the diverse ideological and political groups within the movement around one table. The goal is to forge a broad alliance that is capable of putting the regime under pressure more effectively than at present.

If the government wants to end the political crisis, it needs to offer the protesters more than merely cosmetic reform. But without a new mass mobilisation of the Hirak on Algeria's streets, it is unlikely the regime will make concessions.

Algeria's decision to unilaterally sever diplomatic ties with Morocco in August 2021 – days after the presidency announced in a statement their relations would be reviewed – was ... END_OF_DOCUMENT_TOKEN_TO_BE_REPLACED

Madrid's about-face on the Western Sahara conflict has enraged Algeria. Trade relations have been frozen unilaterally and a cut in gas supplies to Europe could be in the pipeline ... END_OF_DOCUMENT_TOKEN_TO_BE_REPLACED

Sultana Khaya, 41, has been peacefully resisting the Moroccan occupation of Western Sahara for many years. Because of her campaign to assert the self-determination of the Sahrawi ... END_OF_DOCUMENT_TOKEN_TO_BE_REPLACED

Since Spain abandoned its traditional neutrality towards the conflict in Western Sahara, Morocco has announced a "new phase" in relations between the two countries. But what is ... END_OF_DOCUMENT_TOKEN_TO_BE_REPLACED

An increasing number of government ministries in Algeria are announcing they will abandon French in future. They may be reacting to the mood among the population, but the move is ... END_OF_DOCUMENT_TOKEN_TO_BE_REPLACED

END_OF_DOCUMENT_TOKEN_TO_BE_REPLACED
Social media
and networks
Subscribe to our
newsletter