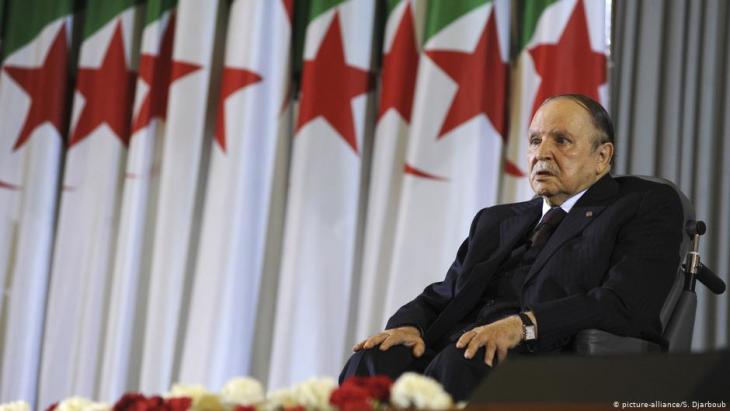 He was brought in by the generals to save the regime, instead he ousted them one after the other. But Bouteflika was no democrat. He had come to rule for life and be buried as President. Now his own people appear to be de-railing those plans. By Bachir Amroune

"I am all of Algeria. I am the incarnation of the Algerian people." It is the summer of 1999, and the newly-elected Abdelaziz Bouteflika is talking to French journalists, a complacent smile on his face.  Such a statement should have sounded alarm bells with the Algerians, but after the long civil war with around 200 thousand dead, the populace was too traumatised and exhausted to put the megalomaniacal President in his place.

The generals' state propaganda presents him as a Messiah bringing peace, a solution with no viable alternatives. As a result he is hailed as a saviour, with thousands thronging to cheer him on at every public appearance.

Almost 20 years and four presidential terms later, millions of Algerians are taking to the streets weekend upon weekend. Even in the smaller villages, people are gathering in huge numbers to chant slogans such as: "Bouteflika, sod off!", "You'll not stay in office for one minute more, oh Bouteflika", and a phrase heard during the Arab Spring "The people want the fall of the regime". The demonstrators, most of whom are young people who have never known any other head of state, have finally had enough of the erstwhile redeemer. The contrast could not be greater!

Even during his first term in office, the voices that warned against Bouteflika as a scheming and vengeful impostor grew ever louder. More people became aware of his bad reputation from the first half of his life: after the death of President Houari Boumedienne, whom he served for many years as foreign minister, and facing trial for embezzling 60 million Swiss francs from Algeria's foreign embassy budget, Bouteflika fled to Switzerland in 1981. 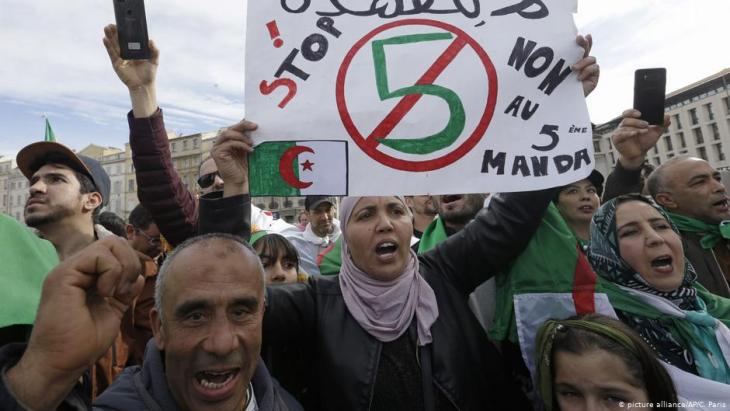 "The people want the fall of the regime": mass protests against Algeriaʹs ailing president began at the end of February and were initially directed against the renewed candidacy of the 82-year-old Bouteflika in the upcoming elections. They continued when the president renounced his candidacy and promised reforms, at the same time postponing the election and thus extending his term of office indefinitely. This actually ends on 28 April. In the meantime, Algeria's political elite have also begun to distance themselves from the head of state

President Bouteflika had nothing to fear. By the time these revelations came to light, he was already firmly ensconced in power. Protests within the general population, such as the "Black Spring" in the Kabylie region (more than 100 dead and 5,000 injured), were brutally crushed on his orders. Within the regime itself, he played the various clans off against each other, thereby consolidating his own kleptocratic power base.

High oil and gas revenues bought him support everywhere: within the army, the intelligence service, with other parties and in the media. Transparency International listed Algeria as one of the world's most corrupt nations. Although it was one of the world's richest countries, it was failing to fulfil its potential across the board. The populace groaned under the weight of the ailing health system, poor education and high unemployment rates.

Hardly surprising then, that when Bouteflika altered the constitution in 2008 to allow himself to remain in power for more than two terms, there was little resistance. When he had himself re-elected with more than 90 % of the vote the following year, it became apparent that he was striving for a life-long presidency that would only end with a state funeral.

Many hoped that day wouldn't be long in coming. Then in 2005, rumours began circulating that the President was suffering from colon cancer. But Bouteflika appeared to be astonishingly resilient.

On 8 May 2012, Bouteflika addressed his compatriots for the last time. Using flowery language, he said that the time had come for his generation to cede power and that the youth should steer the course of the country. Hopes for a peaceful power handover arose and were bitterly dashed yet again.

Political analyst Taqadum al-Khatib argues that Egypt can, in co-ordination with its European partners, develop a common vision to solve the complex conflict in Libya. For this to ... END_OF_DOCUMENT_TOKEN_TO_BE_REPLACED

The upheavals of the past year in the MENA region are arguably as momentous as those of the Arab Spring in 2011. Yet perhaps the biggest difference is that our interest seems to ... END_OF_DOCUMENT_TOKEN_TO_BE_REPLACED

Algeria's political impasse has been going on for weeks. Attempts to calm the public mood by sacrificing some of the Bouteflika faithful has only served to fuel demonstrators' ... END_OF_DOCUMENT_TOKEN_TO_BE_REPLACED

Nearly a decade after the Arab Spring fizzled out, a new wave of protests has swept across the Middle East and North Africa. What is different this time – and will the protesters ... END_OF_DOCUMENT_TOKEN_TO_BE_REPLACED

Hassan Aourid is one of the most important political and intellectual figures in Morocco. In interview with Ismail Azzam for Qantara, Aourid outlines his vision of the decline of ... END_OF_DOCUMENT_TOKEN_TO_BE_REPLACED

The Arab world is one gigantic pressure cooker. For the most part the lid of repression is on, but it is boiling over with increasing frequency. Whether in Lebanon, Iraq or in ... END_OF_DOCUMENT_TOKEN_TO_BE_REPLACED
Author:
Bachir Amroune
Date:
Mail:
Send via mail