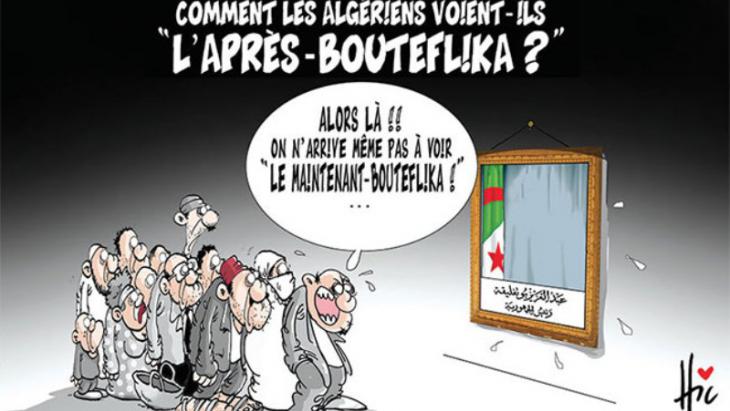 Algerian cartoonists at the cutting edge

In a country like Algeria, where press freedoms are restricted, cartoonists with their subtle criticism of the regime often have a far more subversive impact than mere words.

In Algeria, people start reading newspapers from the back. The last page, or the cartoons page, attracts readers and competes with journalistic articles. All that is required is the understanding of a handful of conventions and some reading between the lines to summarise the reality of a situation.

In a country where the illiteracy rate has reached 13%, images are very influential tools for criticising current affairs whether political, social, economic, or cultural.

Since independence, caricature and cartoon art in Algeria has had an exciting and controversial history. Many artists have crossed lines and incited public opinion. Army generals, leaders of terrorist organisations, as well as public figures from all sides, have all been the subjects of drawings. Even the president of the republic and parliamentary speakers have not escaped appearing in cartoons.

Between censorship and absolute freedom 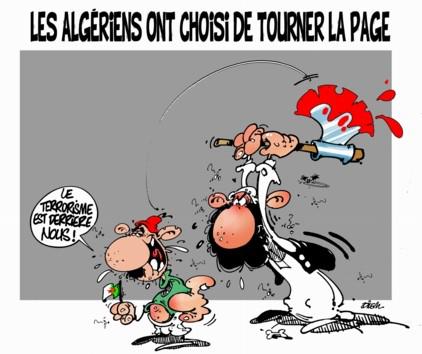 Under President Boumedienne, the ministry of communications was in charge of banning certain information and setting the red lines. Then came President Chadli who gave the press an unprecedented level of absolute freedom. During this period, more than 10 newspapers were published. It has become known as the golden age of the media in Algeria.

Many famous cartoonists appeared during that time namely M′hamed Issiakhem and others. And then came Selim who is considered to be the father of post-independence caricature art. His work appeared in the French-language newspaper ″Ahdath Al Jaza′ir″ and the satirical magazine ″Mqaydish″.

Other artists became famous after that, such as Haroun, Melwah Qassi and Bouamama Mazari. But the bloody period that Algeria went through took its toll on caricature art, especially with the wave of assassinations that targeted journalists and public figures in the cultural sector. Many artists were pushed to move to France, some of whom are still active, such as Jamal Noun and Hisham Baba Ali.

More than just a drawing

In May 2001, the Algerian parliament adopted what was known as the ″Dilem Decree″, which made insulting the president punishable by 2 to 12 months in prison and a fine of 50,000 to 250,000 Algerian dinars (450 to 2300 USD). The same goes for insulting the army or the parliament. However, the punishment is not limited to the person who draws the caricature, but includes anyone who publishes or shares the drawing.

Zalikha Belarbi, an activist in the Algerian association for the defence of human rights, was fined 100,000 Algerian dinars (900 USD) for re-posting on Facebook a photoshopped image featuring Algerian political figures including president Abdelaziz Bouteflika in postures that reference the famous Turkish soap opera ″the Sultan′s Harem″. 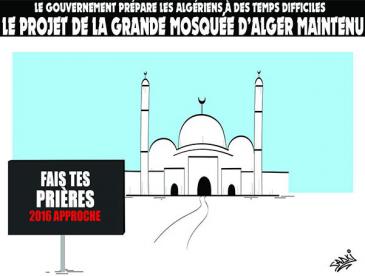 So what are the most sensitive topics that journalists avoid while cartoonists don′t? While the perspectives might differ, below are some of the controversial topics that are most commonly present in the media and public discussions.

The Great Mosque of Algiers

The Great Mosque did not escape the satire of caricatures shared by Algerians on social media. Its construction has been a controversial issue due to its extravagant cost, reaching 1.36 billion USD.

The mosque is also supposed to be built on Bouzria Hill, 365 metres above sea level, in a zone that geologists say is prone to earthquakes. The project faces very strong criticism as a waste of public funds that many think would be better spent on education, health, or other projects.

The reconciliation is ten years old, but remains a subject of much controversy and satire by cartoonists in Algeria. Many years since it was proposed by President Bouteflika in 2005 and voted in as a way to end terrorism in Algeria, it is still far from being implemented.

Many victims of terrorism are still asking for the truth about what happened in the country and many are still missing. 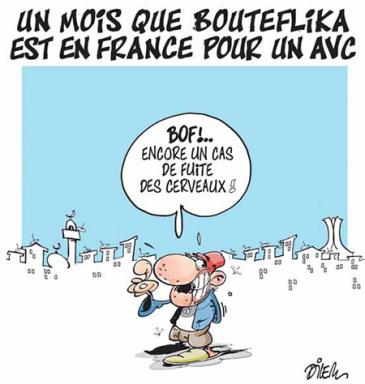 Caricatures are bound to tackle the economy. After all, it is a crucial aspect of the lives of so many Algerians, especially since the fall of oil prices, the only source of income for the country, led to a financial crisis.

Things only got worse with the government′s austerity measures leading to a social explosion.

This is a topic that preoccupies people but presents a big challenge for the authorities. However, it has proven to be very inspiring for caricaturists. Bouteflika has ruled the country as president for 17 years and is now 79 years old.

In 2005 he suffered from symptoms of stomach cancer. The state news agency announced that he had suffered from a passing brain stroke and needs some rest.

In 2014 he ran for the presidential elections in a wheelchair. The facts surrounding his health are a secret protected by excessive laws. This is why every time he disappears from the spotlight, people wonder where he has gone. These questions are then followed by rumours on the street and on social media.

The official response, however, is always a standard: ″The president is in good shape and performing his duties normally,″ which reflects the political state of the country and presents great material for cartoonists.

Home
Print
Newsletter
More on this topic
Interview with the cartoonist Khalil: "There is nothing that can justify this sort of violence"Fighting Islamic State with satire and black humour: Terribly funny Alsatoor, Libya′s caricaturist: The pen is mightier
Related Topics
Abdelaziz Bouteflika, Cartoons, Economy, Education, Free speech and censorship, Freedom of the press, Media in the Arab World, Oil
All Topics

The Algerian state's insufficient response to a recent spate of femicides has driven hundreds of women to defy coronavirus lockdown restrictions to take part in street protests, ... END_OF_DOCUMENT_TOKEN_TO_BE_REPLACED

EU parliamentarian Dietmar Koester criticises the Union's failure to speak up when faced with human rights abuses committed by its Middle Eastern allies, while pointing out that ... END_OF_DOCUMENT_TOKEN_TO_BE_REPLACED

On the 10th anniversary of the Arab Spring we can’t quite escape that substance called remembrance. Yet, eschewing facile modes of nostalgic remembrance and/or tragic lamentation ... END_OF_DOCUMENT_TOKEN_TO_BE_REPLACED

In her third and most recent novel, Paris-based Algerian author Kaouther Adimi writes almost prophetically about a rebellion by a handful of children against the rigid and ... END_OF_DOCUMENT_TOKEN_TO_BE_REPLACED

Mass protests began in Egypt on 25 January 2011. They triggered the overthrow of long-time ruler Mubarak. Ten years later, many human rights activists and journalists are in ... END_OF_DOCUMENT_TOKEN_TO_BE_REPLACED

Mass protests began in Egypt on 25 January 2011. They triggered the overthrow of long-time ruler Mubarak. Ten years later, many human rights activists and journalists are in ... END_OF_DOCUMENT_TOKEN_TO_BE_REPLACED

Algeria needs to be a socialist country for good.

We need a socialist state, so we can stop the thieves before it is too late. Come on camaraderie, let's vote for socialism. It is the best for the best. Peace brothers! / Capitalism is a crime against the people.

END_OF_DOCUMENT_TOKEN_TO_BE_REPLACED
Social media
and networks
Subscribe to our
newsletter