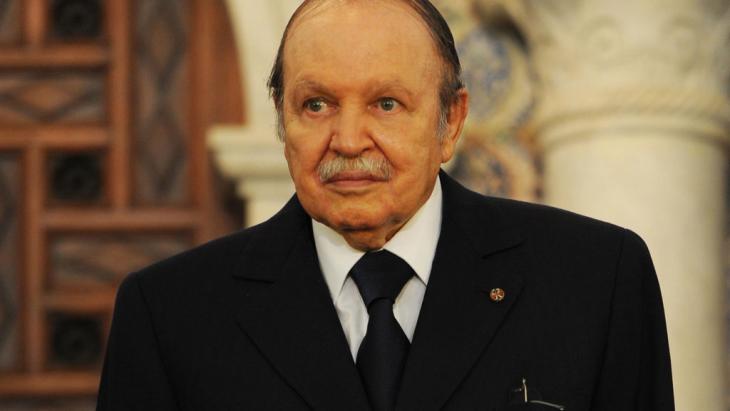 The future of ailing Algerian President Abdelaziz Bouteflika has not been settled – and the nation's powerful figures are nervous. The country is still puzzling over the question of who might succeed him. By Christoph Erhardt

Pledges to renew and regenerate abound. When the ailing Algerian President Abdelaziz Bouteflika led a cabinet meeting again for the first time several weeks ago, his chief concern was nothing less than a promise to "leave a flourishing nation behind for our children". The corresponding declaration spoke of hope, efficiency and transparency of leadership.

For those Algerians who are not part of the leading elite or its profiteers, such words will always sound cynical. This is because there is no genuine desire for renewal. At the beginning of the month, the weekend edition of the newspaper "El Watan" published a caustic caricature.

It showed the President as a spoiled little child playing roughly and unkindly with his toys – figures of men in uniforms and suits. The message: this is how the President, who came to power in 1999, treats the institutions, laws and constitution of the nation. Representatives of civil society, retired officers and opposition politicians are now demanding real change and say it is time to make way for a new generation. 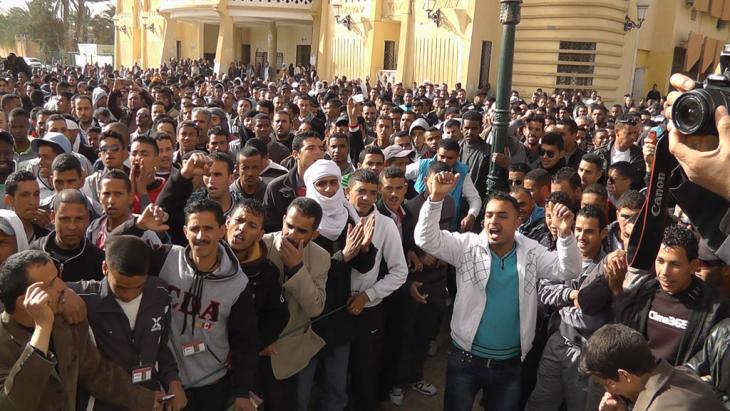 A suspended revolution? Pro-reform protests have been limited by lavish spending of oil revenue on social and jobs programs, but Algeria's vast youth population appears increasingly disenchanted with the old guard leadership

In Algiers, recent days have been dominated by bouts of serious unrest even by this country's standards. Presidential elections are scheduled to take place in April 2014. But Bouteflika has not yet decided on his own future or the matter of his successor. The President was taken to France in April, officially because he had suffered a "mini-stroke". He did not return until July. Reports on and speculation over the state of his health were scotched with a heavy hand.

But the question of what the future now holds for a country that remains at a standstill despite major upheaval in the region is being repeatedly asked. In the words of a newspaper commentary published last weekend, the President's illness is paralyzing the nation. The media are getting impatient, and not just the critical outlets.

"He probably doesn't know himself what he's planning"

"They're very, very nervous at the moment," says Adlène Meddi, Editor-in-Chief of the weekend edition of "El Watan". He is referring to the nation's rulers, categorized with the word "le pouvoir" (the power).

It is not clear whether Bouteflika's fatigue is not only due to his age, but also to the fact that he could be weary of holding office; it is not out of the question that the head of state may decided to stand for office again, or to extend his term with a constitutional amendment. There is general puzzlement over who could succeed Bouteflika, if a new candidate is needed at all.

"He probably doesn't know himself what he's planning," Algerian journalists joke. When the President makes one of his noticeably brief appearances on state television, they describe it as "theatre", or even "farce". Often, all they can do is speculate on what might be being hammered out within the opaque network at the helm of the state. 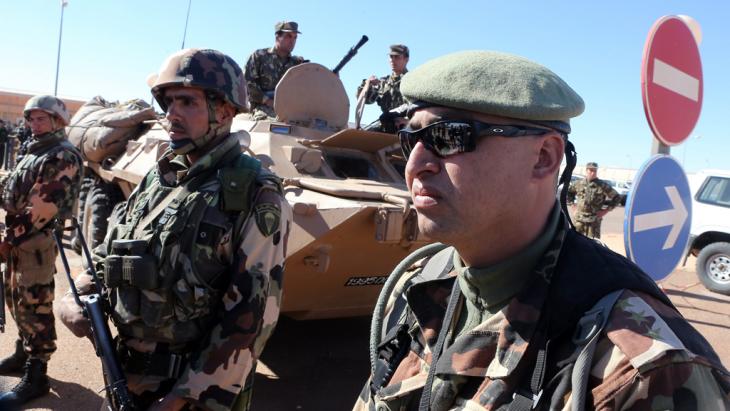 Pent-up frustration: Within Algeria's army, there is thought to be frustration among young officers who have absolved their training abroad and who now feel excluded because key decisions are still being taken by the old guard

This network includes the President and his clan, the intelligence agency the DRS, the army, the administration, the President's party the Front de Libération Nationale (FLN), powerful families and business leaders. All these protagonists have their own interests to consider.

There has long been a sense of displeasure within the country's leadership at the "illiterates" in the system, or in other words those who only owe their jobs to good connections. Within the army, there is also thought to be frustration among young officers who have absolved their training abroad and who now feel excluded because key decisions are still being taken by the old guard of yesteryear.

The President and his entourage are of course not passive at all when it comes down to structuring the imminent future with their interests in mind. Bouteflika ordered a major cabinet reshuffle in mid-September.

He awarded close allies key portfolios such as the interior, justice and foreign ministries, and removed internal adversaries. General Ahmad Gaïd Salah was installed as deputy Defence Minister in the military leadership – a man who is viewed in Algiers as "400 percent loyal" to the President.

Salah was one of the few people the President spoke to while he was receiving treatment in France. In the same month, General Bachir Tartag, famed among western intelligence agencies as an "iron-eater", was removed from the helm of the domestic secret service – this is also being perceived as an attempt to extend the presidential network's control over the state apparatus. His successor, who was brought from Paris to Algiers to take up the post, is closer to the President, says Meddi.

Fear of the jihadists overshadows the idea of freedom

The exceedingly powerful security chief Mohamed Lamine Mediène, known as "Taufik", won't have been best pleased at the move. But Meddi says the Bouteflika camp shouldn't pursue the weakening of his position with too much enthusiasm. The regime cannot afford an internal war, he says, after all there is probably a "gentlemen's agreement" in place.

Taufik will certainly want to have his say in the selection of a compromise candidate for the Bouteflika successor. There has been much speculation over Bouteflika's brother Saïd. He is alleged to have a great influence on the President and to have played a key role in the power-political restructuring of the system. But Saïd is not a credible successor candidate, says Meddi. "He's got no chance." Following the toppling of leaders in Tunisia, Egypt and Libya, the era of republics with hereditary succession is over, he adds. 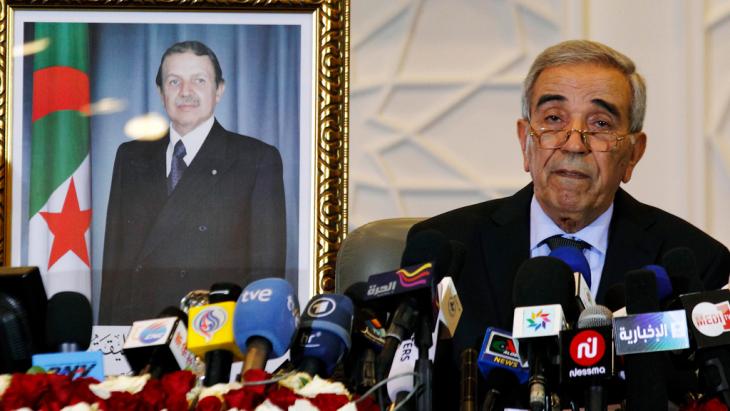 The tide of the "Arab Spring" has transformed some of its neighbours, but not Algeria. Pictured: Interior Minister Daho Ould Kablia announces the FLN's victory in the country's most recent elections. The FLN has been running the coutry for more than 50 years. Now, however, President Bouteflika wants to push through constitutional reforms before 2014 elections to put an end to the powerful intelligence service's role as political kingmaker

This upheaval has done nothing to shake the foundations of the Algerian regime. Concerns over security problems and power vacuums created by the rebellions in the region appear to predominate. The fear of jihadists in border areas as well as weak, passive new governments in Tunis and Tripoli is clearly having a greater impact than the message of newfound freedom.

The Algerian experience during the "Black Decade" props up the regime line that in view of the chaos primarily caused by the Arabellion, similar action should be avoided. This shows that memories of the bloody civil war of the 1990s are still very fresh. Civil society is exhausted.

At the end of May, when it was not even certain whether Bouteflika would return from his treatment in France as President, the Algerian writer Boualem Sansal admitted in a piece written for the French newspaper "Le Monde" that he was bored to death by Algerian politics. It offers nothing that might serve to inspire the nation's sullen youth, he wrote.

Among those holding power, says Editor-in-Chief Adlène Meddi, there is currently no desire for genuine opening and change. These people don't even really listen, he says. So the problems continue to ferment, and socio-economic problems such as high youth unemployment and the housing shortage remain unsolved. The leading elite, which can dig into deep pockets due to gas revenues, buys social stability with handouts thereby making inroads into its reserves, an approach he describes as "very short-sighted".

Home
Print
Newsletter
More on this topic
Algeria and the Arab Spring: Opting for the Status Quo Rather than ExperimentationInterview with Werner Ruf: "Algeria is a Thoroughly Corrupt Country"Algerian Writer Boualem Sansal: What the Tragedy in Algeria Has Taught Us
Related Topics
Abdelaziz Bouteflika, Algerian Opposition, Arab Spring, Arabellion, Democracy and civil society, Human rights, Jihadism | Jihadists
All Topics

Political analyst Taqadum al-Khatib argues that Egypt can, in co-ordination with its European partners, develop a common vision to solve the complex conflict in Libya. For this to ... END_OF_DOCUMENT_TOKEN_TO_BE_REPLACED

The upheavals of the past year in the MENA region are arguably as momentous as those of the Arab Spring in 2011. Yet perhaps the biggest difference is that our interest seems to ... END_OF_DOCUMENT_TOKEN_TO_BE_REPLACED

Algeria's political impasse has been going on for weeks. Attempts to calm the public mood by sacrificing some of the Bouteflika faithful has only served to fuel demonstrators' ... END_OF_DOCUMENT_TOKEN_TO_BE_REPLACED

Nearly a decade after the Arab Spring fizzled out, a new wave of protests has swept across the Middle East and North Africa. What is different this time – and will the protesters ... END_OF_DOCUMENT_TOKEN_TO_BE_REPLACED

Hassan Aourid is one of the most important political and intellectual figures in Morocco. In interview with Ismail Azzam for Qantara, Aourid outlines his vision of the decline of ... END_OF_DOCUMENT_TOKEN_TO_BE_REPLACED

The Arab world is one gigantic pressure cooker. For the most part the lid of repression is on, but it is boiling over with increasing frequency. Whether in Lebanon, Iraq or in ... END_OF_DOCUMENT_TOKEN_TO_BE_REPLACED
Author:
Christoph Erhardt
Date:
Mail:
Send via mail