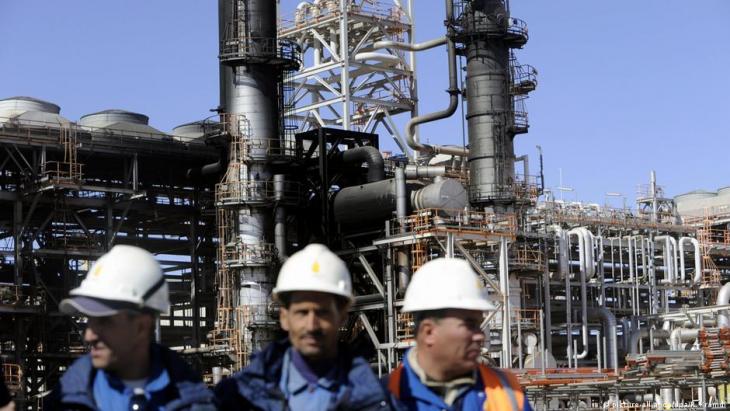 Algeria‘s regime is again cracking down on anti-fracking activists and the unemployed in the country‘s south. Yet EU countries remain keen to scale up their energy cooperation with Algiers, despite the reprisals faced by environmentalists. By Sofian Philip Naceur

Russia‘s attack on Ukraine still has many EU states scouting around for alternative supplies of gas. Their combined efforts are tending to focus on Qatar, Israel and Egypt, but also on Algeria – one of the few options in Europe’s immediate vicinity. Algeria is already connected to the European distribution network with three pipelines, which are currently running below full capacity. The country boasts considerable gas and shale gas reserves and has openly expressed an interest in signing new energy deals.

The new hydrocarbon law – hastily adopted in 2020 amid resistance by the opposition – simplifies cooperation with and investments by international partners in Algeria, the country’s Minister of Energy Mohamed Arkab recently said in an interview with Der Spiegel.

Meanwhile, only this weekend, Algeria’s state-owned oil and gas giant Sonatrach announced the discovery of a major new gas reservoir in Hassi R’Mel in central Algeria. The potential size of the find allows for “one of the largest re-evaluations of reserves in the past 20 years”, Sonatrach said in a statement. Production is scheduled to start as soon as late 2022. The timing could not be better. 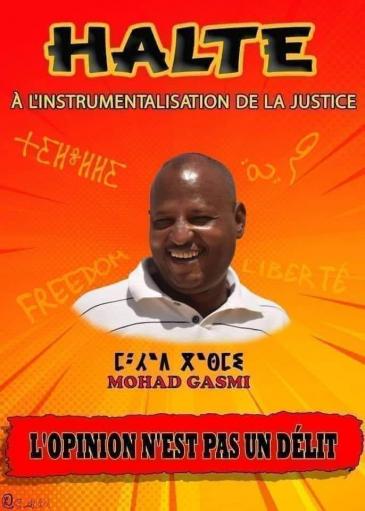 Convicted of 'glorifying terrorism': in October 2021, a court sentenced Mohad Gasmi from Algeria’s southern Adrar region, detained since June 2020, to five years in prison for statements in social media deemed to be “glorifying terrorism” by the Algerian judiciary. In an appeal trial in early June, the sentence was reduced to three years – one of the three, suspended. Nevertheless, this is the first time an environmental activist has been found guilty on terrorism charges in Algeria

However, Algiers’ efforts to attract investments in the energy sector and increase output have a bitter aftertaste, not only in terms of climate policy. Once again, the regime is cracking down on the anti-fracking and the unemployed movement in the country’s most important gas-producing regions, which, at the same time, have been systematically marginalised for decades. In effect, the regime is seeking to put an end to the social and environmental protests that have regularly rocked those regions since 2013.

In October 2021, a court sentenced Mohad Gasmi from Algeria’s southern Adrar region, detained since June 2020, to five years in prison for statements in social media deemed to be “glorifying terrorism” by the Algerian judiciary. In an appeal trial in early June, the sentence was reduced to three years – one of the three, suspended.

Nevertheless, this is the first time an environmental activist has been found guilty on terrorism charges in Algeria.

Human rights organisations Amnesty International, Frontline Defenders and Cairo Institute for Human Rights Studies (CIHRS) have slammed the criminal proceedings against Gasmi in both this and a previous trial, during which he was sentenced to three years in prison in a first instance for “revealing confidential information without the intention of treason or espionage”.

“Gasmi is a threat to the regime because he represents a powerful activist, capable of mobilizing southern populations on a wide range of issues – from civil and political rights to social, economic and environmental rights,” Nadege Lahmar, Maghreb Researcher at CIHRS Tunis office told Qantara.de. He understood and integrated the indivisibility of these issues in his actions like very few are able to, the human rights activist said.

Civil movements targeted by the authorities

In the 2010s, Gasmi had joined the unemployed movement in southern Algeria and the Comite national de defense des droits des chomeurs (CNDDC), becoming involved in protests calling for a redistribution of wealth, and new jobs and investment in marginalised regions. The epicentre of these protests were the provinces of Ouargla, Ghardaia and Adrar, which, unlike the coastal provinces, have remained virtually excluded from oil and gas export revenues, despite their proximity to Algeria’s two most important oil and gas producing areas Hassi R’Mel and Hassi Messaoud.

Back then, the regime made several attempts to crack down on the movement with arrests and intimidation. Apparently however, the movement only became perceived as a serious threat to the status quo by the Algiers elites once it had declared its solidarity with the anti-fracking movement in 2014. 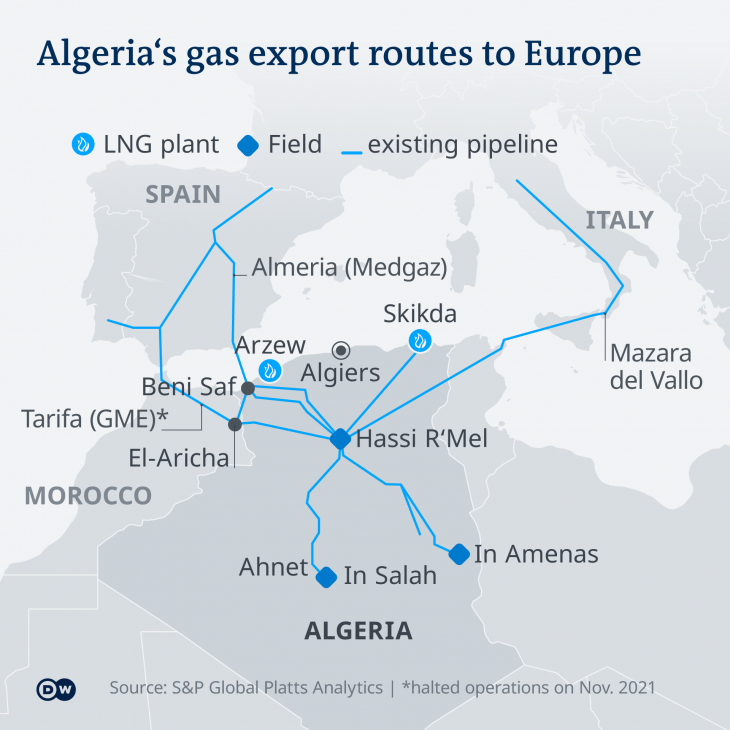 Algerian anti-fracking activists a thorn in the regime's side: protests broke out in the desert town of In Salah in 2015 after the government announced its intention to extract shale gas by means of fracking, which is extremely harmful to the climate and the environment. The anti-fracking protests quickly spread across central Algeria. The regime reacted with reprisals to the massive mobilisation. Sonatrach stopped the exploration work around In Salah in 2016. But it is certain that sooner or later the regime will try again to tap the enormous shale gas reserves

Immediately after the government announced its intention to extract shale gas by fracking – a method of gas extraction with an extremely harmful impact on climate change and the environment – thousands of people, including many belonging to the unemployed movement, took to the streets of In Salah in southern Algeria. The anti-fracking protests quickly spread across central Algeria. The regime responded to the massive mobilisation with reprisals. In 2015, 16 people including several CNDDC members were sentenced to prison terms of up to two years for participating in the protests.

Sonatrach halted explorations around In Salah in 2016. Ever since, however, government officials have repeatedly made contradictory claims regarding the authorities’ intentions. Most recently, Algeria’s minister of energy stated that shale gas exploitation was still in its evaluation phase, while pointing out that there are still sufficient conventional gas reserves. It is nevertheless considered certain that the regime will sooner or later once again try to tap Algeria’s enormous shale gas reserves.

But to do so – as the regime has learned its lessons after the 2015 anti-fracking protests and the nationwide 2019 mass uprising of the Hirak protest movement – it must keep social movements in extraction areas in check and, above all, prevent them from once again acting in solidarity with each other and at a supra-regional, if not national level.

The recent judicial actions against Gasmi – one of the most well-known CNDDC and anti-fracking activists in Algeria – is very much in line with this approach. While the Hirak, worn down for the time being, has disappeared from the public sphere due to fierce repression and the pandemic, large-scale protests by the unemployed movement once again erupted in Ouargla in 2021. The conviction of Gasmi and other activists belonging to the movement, such as Ameur Gherrache and Sofian Hamdat, shows that the regime is using deterrents and intends to pacify the south by violent means.

Following the corona crisis, it is the Ukraine war that is now playing into the hands of Algeria’s regime, as it can exploit the conflict – both domestically and in foreign affairs. The regime increasingly increasingly appears to be using the war and global demand for energy as an excuse to further intensify domestic reprisals against the Hirak and indeed any independent voices, says Lahmar of the CIHRS. Meanwhile, Algiers is pursuing a carrot and stick approach in its energy diplomacy with Europa.

Spain’s provocative recognition of Morocco’s claim to Western Sahara, occupied by Rabat since 1975 and whose independence Algeria supports, has been met by Algiers with a clear refusal to supply additional gas to Madrid. Instead, the regime has signed a new gas deal with Italy.

Germany also wants to expand its stakes in Algeria’s energy sector and is keen on purchasing both green hydrogen and liquefied gas. As recently as mid-June 2022, Katja Keul, minister of state with the German Foreign Office, travelled to Algiers and offered the government even closer cooperation in the energy sector. To what extent the politician from the German Green Party was taking into account the persecution of environmental activists and their convictions on terrorism charges in Algeria in her efforts to expand energy cooperation with Algiers remains unclear. In response to a parliamentary inquiry by Left Party MP Alexander Ulrich relating to the Gasmi case in the German parliament, the Foreign Office remained emphatically evasive.

It is possible to write about the Holocaust and the crimes of colonial powers without downplaying anything. In her latest book, Charlotte Wiedemann focuses on the numerous blind ... END_OF_DOCUMENT_TOKEN_TO_BE_REPLACED

For the first time since 1989, Algeria‘s authoritarian regime has sent a military parade marching through Algiers. A formidable show of strength designed to impress rival regional ... END_OF_DOCUMENT_TOKEN_TO_BE_REPLACED

Algeria's decision to unilaterally sever diplomatic ties with Morocco in August 2021 – days after the presidency announced in a statement their relations would be reviewed – was ... END_OF_DOCUMENT_TOKEN_TO_BE_REPLACED

Madrid's about-face on the Western Sahara conflict has enraged Algeria. Trade relations have been frozen unilaterally and a cut in gas supplies to Europe could be in the pipeline ... END_OF_DOCUMENT_TOKEN_TO_BE_REPLACED
Author:
Sofian Philip Naceur
Date:
Mail:
Send via mail

END_OF_DOCUMENT_TOKEN_TO_BE_REPLACED
Social media
and networks
Subscribe to our
newsletter