Although the Algerian state has profited hugely from the oil boom, poverty levels in the country are rising. More and more people in Algeria are starting to wonder where the petrodollars actually go. Youssef Boufidjelin and Hassan Znined report

Since 2003 Algeria has been flooded with a tidal wave of petrodollars - but where is the money actually going?

​​Algeria, a key oil producer and Europe's second-largest gas supplier after Russia, has been veritably flooded with a tidal wave of petrodollars since the start of the fourth oil crisis in 2003. The Algerian reserves reached 32 billion dollars in 2004, by the end of 2006 there were 75 billion in the bank, and predictions for 2010 are at 160 billion dollars.

The capital of Algiers looks like one giant building site. There are new office buildings, shopping centres and bridges going up everywhere. And even an underground train network, the state's great dream since independence in 1962, is finally being built.

Modernisation on the backs of the population?

But one detail is a brutal reminder that not everyone profits from these changes. Countless beggars – men, women and children – populate the city; fled from the rural areas where there is not even the slightest sign of the petrodollars.

This fact makes it perfectly clear why many Algerians are asking where the petrodollars are actually going. The government has started an ambitious initiative to boost the country's development, aiming to catapult all areas of the Algerian economy into the modern age. 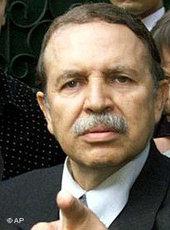 ​​Algeria has no problems finding sufficient funds any more, but does have to avoid wasting or diverting that money, as has happened in the past. The Algerian president Abdelaziz Bouteflika is clearly annoyed if anyone dares to question this issue.

Since independence, Algeria has never been in such a good financial situation as now, maintains Bouteflika. The country has "profited from the valuable chance to pull Algeria out of the era of darkness," according to the president.

Clear discrepancy between rich and poor

But the people in Ain Dafla, for example, have not yet noticed any of Bouteflika's glorious announcements – the rural region less than two hours' drive southwest of Algiers suffers from droughts and isolation. During the civil war in the 1990s the area was hard-hit by terrorism. Many people have fled to the cities since then, but others don't want to leave their homes and are still trying to survive in the region.

The civil war that flared up as a consequence of the overwhelming election victory of the Islamic Salvation Front (FIS) in the early 1990s traumatised the entire country. A guerrilla war raged against the security forces and their supporters, killing more than 150,000 people, mainly civilians. Even then, social injustice, corruption and the poor distribution of the petrodollars were key factors behind the FIS' election results.

The World Bank and other NGOs regard a third of the Algerian population as poor. The Algerian government, however, rejects these statistics. The disparity between the official discourse of the political elite and reality is not only obvious in the countryside. In the cities too, many young people dream of emigrating to escape poverty.

​​Ahmed Ben Bitour, a former Algerian prime minister, is highly critical of this development. "The problem we have today is the inefficiency of all institutions – the political parties, civil society, the state, the parliament. I believe we have a government that doesn't understand that it has to give the institutions a voice. We are now dependent on what the head of state wants to do."

Algeria has used the flood of petrodollars to pay back its foreign debt ahead of time. National debt has fallen to five billion dollars within four years – causing many critics to speculate that the government doesn't know what to do with all the money any more, even though a large part of the population is on the brink of starvation.

Experts, however, consider the growth of a varied Algerian economy far more important. One of the country's major problems is its dependence on oil. Algeria is also one of the oil-exporting countries that have managed their wealth the least well – the main reasons being poor administration and corruption.

It is not too late for Algeria to learn from the mistakes of the past and construct an economy not entirely dependent on oil. And that is the only way for the Maghreb state to regain the support of a population that is highly mistrustful of its political elites.

Amnesty for Islamist Fighters in Algeria
Extension of Deadline Not Ruled Out
The end of August 2006 marked the expiration of the period during which radical Islamists in Algeria could lay down their weapons and take advantage of the offer of amnesty. Few fighters have responded to the offer to date. Bernhard Schmid reports on why

The Socio-Cultural Project "Santé Sidi El Houari"
Uncovering Algeria's Buried Identities
An open debate about the decade of terror in Algeria is virtually unthinkable. Nonetheless, many Algerians are trying to deal with their country's tragic history in another way. In the western Algerian city of Oran, for instance, a socio-cultural project seeks to combine community work with the search for a new identity. Beat Stauffer reports

Radical Islamism in Algeria
The Men Who Benefited from the Civil War
While most of the armed Islamist groups in Algeria have been crushed, an amnesty has guaranteed many penitents exemption from punishment. But these laws have not been well received by all parts of the Algerian population. Bernhard Schmid reports