"Morocco's Society Is Not at All Becoming More Liberal"

A symbol of the fight for freedom of speech after his imprisonment and hunger strike, exiled journalist Ali Lmrabet is ready to return to his native Morocco and continue his crusade for the freedom of speech. Míriam Rodríguez and Eva Queralt report 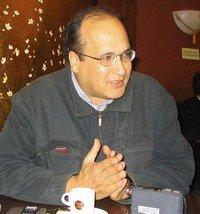 Ali Lmrabet: "I don't know if it is cynicism or opportunism when politicians like the Spanish President José Rodríguez Zapatero say that freedom and democracy are being consolidated in Morocco"

​​The ease with which we are able to contact, and arrange a meeting with, a journalist of Ali Lmrabet's standing is remarkable. We meet one Saturday morning in a patisserie in the centre of the Eixample district of Barcelona. While we order coffees, Ali reads over the two newspapers he has been carrying under his arm. He is brought a decaffeinated espresso, which he savours throughout our conversation.

The interview starts, and straightaway we have our scoop: he is about to leave Barcelona, where he lives with his family, and return to Morocco indefinitely. He has "commitments with many people," he says.

As a member of the Moroccan Association for Human Rights and a tenacious fighter for freedom of speech in his country, Lmrabet believes he should "go back and write about what is happening," because to stay in Barcelona "would be like running away."

Charged with libel for having published that the Saharawis living in encampments are not held captive, but rather are refugees, he has been banned by the Moroccan regime from practising as a journalist in the national media for ten years. But this will not prevent him from working in Morocco, because he will do so as a correspondent for the Spanish daily El Mundo.

Global icon of the fight for freedom of speech

Here is someone with itchy feet, a combative journalist who is bored with the peaceful life of Barcelona. In 2003, when he was editor of the weekly satirical publications Demain Magazine and Doumane, he was sentenced to three years in prison, charged with insulting the king and offending the monarchy and the territorial integrity of Morocco. Why?

Caricatures of some photos of the monarch, a photomontage, the reprinting of an interview with a former dissident Moroccan republican, published by a Spanish newspaper, and an article about the Moroccan royal household's budget. The two hunger strikes he went on, denouncing prison conditions and asking that he be regarded as a political prisoner turned him into a global icon of the fight for freedom of speech.

After seven months imprisonment and as a result of international pressure, he was pardoned by the king. In 2005, however, when the journalist was about to begin new projects, a fresh accusation prevented him from practising as a journalist in Morocco. But he is going back, because "in this banana monarchy without freedom of speech," there is much to be done.

"After what you have experienced, do you still believe that an independent press is possible in Morocco?" we ask. "Of course, and it represents the hope that the country will be democratised, because a country's freedom depends on freedom of speech." In fact, he returns knowing that he could be imprisoned again.

"Why would a regime that does not respect anything, not even its own laws, respect me?" he asks. It is a difficult path that is chosen by politically committed people like Lmrabet, who, after resigning from his job as a diplomat, stumbled across journalism by chance when a friend, editor of a weekly magazine who had not received an article, asked him to write something urgently.

"Europe does not know the Maghreb"

The conversation with Lmrabet is exciting. With a calm voice and agile manner, he blends brushstrokes of Moroccan current affairs with historical and cultural facts so as to paint us a picture of the reality of this country which he knows so well. Breakfast time gives way to lunchtime and the room, quiet until now, begins to fill with people.

Our coffees are almost finished when we manage to turn the conversation to relations between Europe and the Maghreb. Lmrabet is very clear about it: "The Maghreb does not know Europe, nor does Europe know the Maghreb."

And the Mediterranean "more than a sea, is an ocean between two worlds that are strangers to each other, and, rather than joining them, it separates them."

In Europe, the situation of those on the southern shores of the Mediterranean is much talked about. But it is spoken of from ignorance. Lmrabet disagrees strongly with European politicians who assert that Morocco is experiencing a liberalising period under the new king, Mohammed VI. "I don't know if it is cynicism or opportunism when politicians like the Spanish President José Rodríguez Zapatero say that freedom and democracy are being consolidated in Morocco."

The alliance of the uncivilised

Criticism of Spanish foreign policy extends to the Alliance of Civilisations, proposed by the President of the Spanish government before the UN to promote dialogue between the west and the Muslim and Arab world. It is a "good but empty initiative which has floated ideas which the media have elaborated on."

The question which this journalist asks is with whom would this alliance be made? "With Mohammed VI? With Gaddafi? With Ben Ali? They want to create an alliance of civilisations with uncivilised people!" Lmrabet's proposal is completely different: it should be made with the people and the civil organisations that represent them.

The EU also comes in for criticism. According to the journalist, in Morocco's case, "not only does it not aid its democratisation, it protects and supports its undemocratic monarchy." He explains that the EU's aim is to contain extremist Islamic movements, but that it is already too late: "Islamic fundamentalism cannot be contained because it is within the people."

What is more, "it has a right to exist if it accepts the rules of the game: democracy and freedom of speech." Once again, Lmrabet shows us that he is in favour of dialogue and of respect for ideas, however far they may be from his own.

Unbelievably, we have been talking for almost an hour and a half now, and the noise around us makes it difficult for us to continue. Lmrabet, however, could go on forever, and continues to recount a string of anecdotes as we make our way to the door.

We, and Barcelona, say farewell to this journalist and freedom fighter who is returning to his country, the country to which he will always be bound. He explains this by quoting from Lampedusa's The Leopard: "If those who are exiled leave their country after the age of eighteen, they will never adapt to any other place and will be exiles all their lives. I left a little late, at nineteen, and I will be Moroccan forever."

Morocco
The King's Belated Clemency
It took a while before he could bring himself to do so, but Morocco's King Mohammed VI has now released Ali Lmrabet. The dissident journalist had originally been sentenced to a lengthy prison term for the alleged crime of lèse-majesté. Martina Sabra reports on a Moroccan maverick

Morocco
The Arab World Has Its Own Models
Could Morocco serve as a political model for Iraq in the country’s attempt to come to terms with its dictatorial past? Dr Sonja Hegasy of the Centre for Modern Oriental Studies, Germany, thinks it could

END_OF_DOCUMENT_TOKEN_TO_BE_REPLACED
Social media
and networks
Subscribe to our
newsletter