The "Boulevard des jeunes musiciens" in Casablanca celebrated its tenth anniversary at the end of June. The alternative music festival excites young people and annoys the government. David Siebert reports 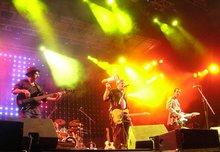 Public authories in Morroco had banned the festival; the ban, however, was lifted soon after, due to major protests

​​Mohamed "Momo" Merhari stands on the dusty ground of the Stade de l'Etoile rugby stadium and rubs his eyes wearily. "The festival was banned two days ago," he says, explaining the hectic activity of the stagehands in the scorching midday heat. "It was only thanks to our protests that the ban was lifted again."

In the evening, everyone is relieved. Already on the first day of the festival, thousands of guests have arrived. To mark the anniversary, there is a "best of" program. Groups like Fez City Clan, Hoba Hoba Spirit, and Haoussa made their first major appearances at the Boulevard; now they are the heroes of urban youth. Over 40 bands appear; the musical spectrum ranges from heavy metal to hip hop, dub, electro, and fusion – a potpourri of Moroccan styles, rock, and reggae.

Crystallization point of the subculture

When Momo founded the Boulevard with Hicham Bahou in 1999, no one anticipated that it would soon become the crystallization point of the subculture. "At first, there were only three or four heavy metal and rap groups here," recalls the 36-year-old Momo. By the next year, the rented hall was already bursting at the seams. "Inside, the audience smashed the windows out of enthusiasm. Outside, there were thousands who still wanted to get in." The Boulevard moved to a stadium. Last year, 160,000 people attended the concerts. 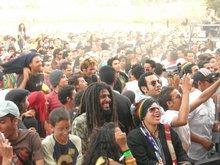 "Hashish Smokers, Lesbians, and Young People Who Behave Like Animals." The Islamist press critisized the festival and its "westernized" youth culture

"The Moroccan musical culture is still very much alive among young people. Even rappers can play traditional songs at a wedding," says Reda Allali, a singer with Hoba Hoba Spirit. "We open up the world to ourselves but still continue to be 100% Moroccan, because we retain our distinctive characteristics," adds Badre, a guitarist with the reggae Gnawa band Darga.

Culture as a threat

A new popular music culture of their own – for the Islamic kingdom, that is a minor revolution. The regime of the former king, Hassan II, saw culture as a threat. "During the 1970s, they tore down theaters and concert halls here and put musicians in prison," Momo explains.

In the new alternative music scene, young people can express themselves again. The rappers are regarded as spokespersons for the poor ghettos. They denounce unemployment, corruption, and police tyranny. Raptiviste.net has released the mix tape Mamnou3 f´Radio, a collection of rap titles which were boycotted by radio stations or censored by the government. "Critical hip hop represents a threat in a society where 60% are illiterates," declares the rapper Z-One.

The fusion bands approach the malaise with irony. In "Miloudi," Hoba Hoba Spirit makes fun of the corrupt traffic police found on every corner, with their handlebar moustaches. Haoussa combines sarcastic social criticism with a radical esthetic concept – they appear wearing clown wigs and mix traditional Issawa music with deafening punk, ska, and drum and bass.

The downfall of tahini

​​There are also obstacles, however. "In Casablanca, there is one youth cultural center for half a million inhabitants. The functionaries there don't even know what a guitar amplifier looks like," laughs Khalid, a singer with Haoussa. "Anyone who steps onto the stage with an electric guitar or in a hip hop outfit in Morocco is considered a troublemaker," explains Reda Allali. The well-known theater director, Abdelkarim Berchid, deplored that hip hop was part of a "cultural infiltration" and tahini would soon be replaced by "hamburgers, chewing gum, and video clips."

Hoba Hoba Spirit samples his television interview into their song "El Kalakh" and accuses him of intellectual arson. Prophecies of doom about the "westernization of Morocco" are common; in its newspaper Attajdid, the Islamist PJD party viciously attacks the Boulevard and in 2007 submitted a petition against the festival to parliament. Last year, Al Massae – an independent daily newspaper – entitled a report on the festival "Hashish Smokers, Lesbians, and Young People Who Behave Like Animals."

Momo reacts to attempts to ban the festival with a shrug of his shoulders. "In 2005, two civilian police officers came onstage. We were supposed to stop the concert, because three generals in the neighborhood couldn't sleep on account of the noise! We answered, '25,000 young people are having a good time here; are we supposed to cancel everything because of three generals?'"

​​The government also torpedoes the Boulevard. "The Ministry of Culture cancelled all our subsidies. Payment of the outstanding funds was stopped. Now we are missing 60,000 euros!" Momo complains. Since admission is free, the only source of income is sponsoring. The king's Mawazine Festival, on the other hand, receives 3 million euros. "Most festivals here are controlled by the government," he says. "We are subversive and independent, and that annoys them. But that is what makes us strong. The festival belongs to the young people, so we have countless voluntary helpers."

The reform policy of the liberal King Mohammed gave rise to great hopes for a long time. "Nayda," Arabic for "upwards," was the slogan with which the revival of cultural life was acclaimed – an allusion to the "Movida," the sociocultural revolution that accompanied the transition to democracy in Spain. Nevertheless, ongoing social injustice and repression against human rights groups, independent media, and critical artists show that the process of opening up is taking place within a narrow framework.

"To talk about a Movida under these circumstances is an insult to people's intelligence," concludes Ali Amar, chief editor of the Journal Hebdomadaire. The audiences at the Boulevard remain optimistic, however. At the close of the festival, Hoba Hoba Spirit begins to play their hit "Bienvenue a Casa" – "Welcome to Casablanca". Tens of thousands cheer and shout enthusiastically, "Casa Nayda!"

Translated from the German by Phyllis Anderson.

Analysis Thomas Burkhalter
Funk from Kabul, Ska from Istanbul, Rap from Dakar
In terms of its musical variety, Muslim culture knows no boundaries. From Indonesia to America, and from Stockholm to Cape Town, most Muslim musicians insist on personal, artistic freedom. And yet an increasing number of musicians are distancing themselves from the mainstream in order to focus on Islamic values. By Thomas Burkhalter

END_OF_DOCUMENT_TOKEN_TO_BE_REPLACED
Social media
and networks
Subscribe to our
newsletter