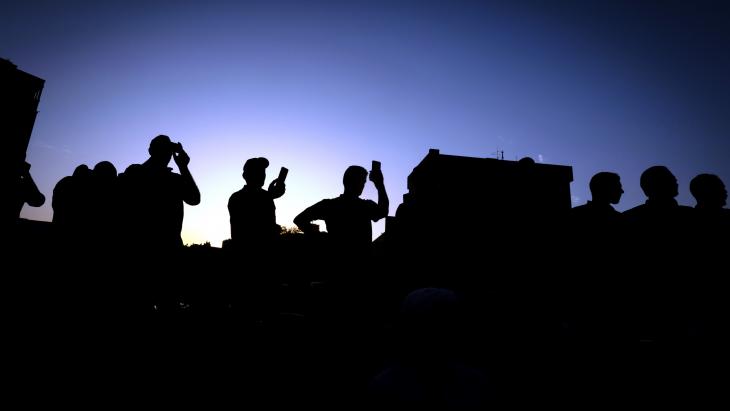 In recent weeks, Jordan's social media has been awash with photos and videos of demonstrators gathering in cities all over the country, chanting "Long live the teacher" and "we will not be silenced". Mainstream media coverage, however, has been noticeably lacking. By Marta Vidal

On 25 July, the Jordanian government shut down the opposition-run teachers’ union – The Teachers Syndicate – for two years, arresting its leading members. Yet, despite the order to suspend the union’s activities, teachers have continued their nationwide protests.

Beyond their initial demands for better salaries and work conditions, teachers are asking for the release of union members and the re-opening of the union. Some demonstrators have escalated their demands and are calling for the resignation of Jordan’s prime-minister Omar Razzaz.

While photos and videos of protests fill social media, very few of these images have made it into Jordanian newspapers or TV channels. Following a raid on the union’s offices and the arrest of its leadership, Jordanian authorities issued a gagging order barring publication of news or commentary on the case, except by entities authorised by the state.

According to state news agency Petra, the head of the union Nasser Nawasreh has been charged with incitement, with several members of the union arrested for questioning on "criminal and corruption charges".

With over 100,000 members, the Teachers Syndicate is one of the most prominent sources of opposition to the Jordanian government. Last year, it went on strike for over a month until a deal could be struck with the government regarding a teachers’ pay increase. 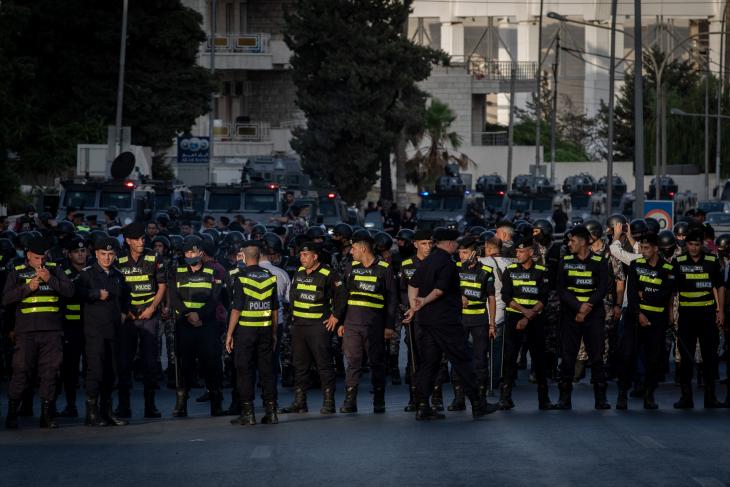 Scant tolerance for dissent or opposition. "Shuttering one of the Jordan's few independent labour unions following a protracted dispute with the government and on dubious legal grounds raises serious concerns about the government's respect for the rule of law," says Michael Page, deputy Middle East director at Human Rights Watch. "The lack of transparency and the ban on discussing this incident on social media only reinforces the conclusion that the authorities are violating citizens' rights"

In recent weeks, union representatives accused the government of failing to honour the deal, after the cash-strapped government announced that it would be freezing public sector wages in response to the economic repercussions of the coronavirus pandemic.

The authorities have accused the syndicate of trying to "harm the state’s essential services", and some officials have claimed the union’s leadership harbours an "Islamist" agenda, an accusation dismissed by the union as a "smear campaign". Jordan’s prime-minister Omar Razzaz has said the government will not submit to the union’s "bullying".

According to human rights organisations, regardless of the alleged political motivations of unionists, the closure of the union and the arrests of teachers illustrate the Jordanian government’s lack of tolerance for dissent or opposition.

Home
Print
Newsletter
More on this topic
Protests in Jordan: "The status quo has to go"Protests in Jordan: A small kingdom with big problemsPolitics, inequality and a lack of transparency: Coronavirus and the Middle East's ongoing state of emergency
Related Topics
Abdullah II of Jordan, Coronavirus, Democracy and civil society, Economy, Free speech and censorship, Freedom of the press, Human rights, Islam and democracy, Media in the Arab World, Rule of law
All Topics

They’ve already got the Louvre; they’ll soon have a Guggenheim Museum as well – and now the Emirates have added literature to their quest for cultural supremacy in the Arab world ... END_OF_DOCUMENT_TOKEN_TO_BE_REPLACED

The rollout of coronavirus vaccines in the Middle East and North Africa is already taking place on a massive scale, with the United Arab Emirates leading the way. Nevertheless, ... END_OF_DOCUMENT_TOKEN_TO_BE_REPLACED

Faced with a deteriorating economy and a discontented populace, Jordan's ruling family is feeling the pressure. END_OF_DOCUMENT_TOKEN_TO_BE_REPLACED

Founded in 1921 as a temporary solution, Jordan managed to establish itself as one of the most stable countries in the Middle East. The inclusive and flexible approach taken by ... END_OF_DOCUMENT_TOKEN_TO_BE_REPLACED

German Middle East analyst Guido Steinberg and television journalist Ulrich Tilgner have both published new books on the conflicts in the Middle East. Their analyses and their ... END_OF_DOCUMENT_TOKEN_TO_BE_REPLACED

END_OF_DOCUMENT_TOKEN_TO_BE_REPLACED
Social media
and networks
Subscribe to our
newsletter