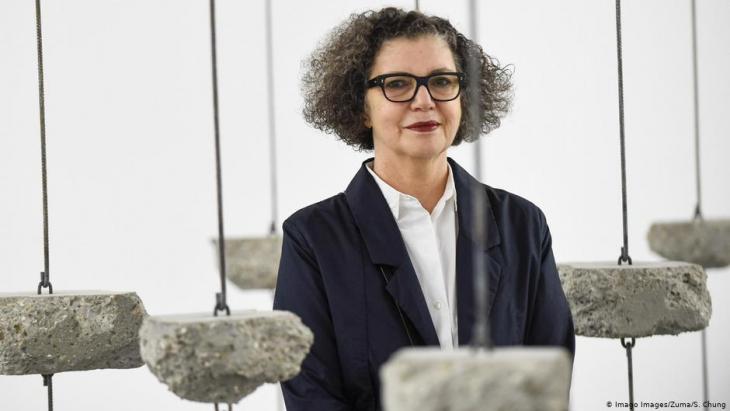 Contemporary artist Mona Hatoum is one of those figures whose presence in western capitals stimulates much attention and critical writing, while her exhibitions in Arab cities like Amman or Doha don’t seem to generate more than a few lines in the culture and entertainment sections. Yazan Loujami explores why this is so

Born in Beirut to a Palestinian family who fled Haifa during the Nakba, 23 year-old Mona Hatoum found herself stuck in London with the outbreak of war in 1975, adding one exile to another and producing her early works in Thatcherite Britain, works that have since borne the scar of wars and frontiers piling up between her and her former life.

Some western critics have a hard time stomaching this background; there seems to be a confusion as to how art like Hatoum’s can be both universal enough to make it into timeless places like Centre Pompidou or Tate modern, while simultaneously identifying with a country that is off the map.

Their solution to this dilemma usually runs along the lines of her art being so relevant to the West as to be redeemed from its Palestinian background. The catalogue introduction to her Pompidou retrospective reads for example: "Mona Hatoum doesn’t construct the work of a Palestinian exiled in London (…) she’s an artist of the present, in phase with our modernity and its issues [italics added]."

As if exiled Palestinians are by definition outside the present, living some pre-modern apocryphal version of history that could spoil our reading of Hatoum’s art if allowed to interfere too much. That is exactly what this article is proposing, for the pleasure of provoking, but also of opposing a discourse that threatens to write off Hatoum’s art as a harmless western product with a pinch of spice.

Repatriating Hatoum's art is not without its dangers

Of course, this is not to undermine the list of achievements Hatoum will be credited for by western art historians, achievements relating to "[their] modernity and its issues", like masterfully managing the shift from minimalism to post-minimalism, reconciling the legacy of 20th century abstraction with new forms of political engagement and other achievements with little relevance to the Arab spectator, who will be instantly bewitched by Hatoum’s works, no introductions necessary, as they will speak to him in a language he knows too well.

Oppressive yet fragile: "it’s impossible for both people to drink at the same time,. One of them takes everything unless the other decides to respond to the object’s violence with a new violence, breaking the cup free with the risk of losing the other, scarring it beyond repair, if not completely destroying it, or destroying both cups," writes Loujami

On the other hand, repatriating Hatoum’s art is not without its dangers. The sheer scale and diversity of her work are beyond regional confinement, her charm stems from a sense of foreignness and from a delicate presence of homeland that risks getting crushed by insisting too much on defining it.

In Keffieh, for example, bits of Hatoum’s hair are woven into the emblematic Palestinian textile, curling out like noxious weed. The result is unsettling and leaves much to be said: maybe it’s a way of addressing the dangerous femininity that overgrows a national icon; hasn’t the keffieh always been made for men by women, at the expense of their own lives and bodies?

Isn’t it also the symbol of a resistance written by men, while a closer look reveals the traces of a femininity amputated to create the masculine icon? What about women’s hair? Is it still ‘awrah, an intimate part to be covered, when it is woven into the very tool that could be used to cover it?

Hatoum’s Keffieh doesn’t ask any of these questions though. It’s a silent object, all it does is to exist, to provoke. The questions are our way of explaining away the sudden unease towards an object we knew to be familiar and harmless. But the power of Hatoum’s work lies precisely in its ability to resist explanation, insisting on communicating its meaning in a way instinctive, telepathic, yet crystal-clear.

Research project "The Global Qur'an", brainchild of Professor of Islamic Studies Johanna Pink and sponsored by the European Research Council, analyses the history and ... END_OF_DOCUMENT_TOKEN_TO_BE_REPLACED

As the Western world emerges from a holiday season made less festive by COVID-19, millions of children in Afghanistan are starting 2022 facing the prospect of famine, illness, and ... END_OF_DOCUMENT_TOKEN_TO_BE_REPLACED

A wedding extravaganza of bright colours, flowers, feasting and dancing, yet the bride, Nefie Eminkova, who comes from Bulgaria's Pomak – Muslim – minority, can see none of it. ... END_OF_DOCUMENT_TOKEN_TO_BE_REPLACED

Every year in December, the team at Qantara.de takes a look back at the articles that proved most popular with our readers. This year is no different. Here is a run-down of the ... END_OF_DOCUMENT_TOKEN_TO_BE_REPLACED

Jesus – Issa in Arabic – doesn’t merely enjoy the highest place among the prophets in the Koran. He is also revered in Islam’s mystical tradition for his message of love and mercy ... END_OF_DOCUMENT_TOKEN_TO_BE_REPLACED

The military in Sudan has never waged war against a neighbour, but it has already staged 17 coups. Tens of thousands of people are risking their lives to oust the military by ... END_OF_DOCUMENT_TOKEN_TO_BE_REPLACED
Author:
Yazan Loujami
Date:
Mail:
Send via mail

END_OF_DOCUMENT_TOKEN_TO_BE_REPLACED
Social media
and networks
Subscribe to our
newsletter