Danger lurks beneath the surface

Hatoum re-teaches us how to look at things. No object is innocent nor safe from power dynamics, nor from some sinister violence hiding within it, waiting for a poke to reveal its teeth; and no one is better than Hatoum when it comes to awakening the bogeyman latent in things, unleashing it without prior warning to scare us like children, leaving each to draw the lesson they deserve.

What if two teacups are merged together like Siamese twins? All it takes is one look at T42 (1999) and it’s as if teacups have always been like this. Hatoum’s teacups are oppressive and yet very fragile, they have something of the emotional blackmail of family tea gatherings, of thorny one-sided conversations.

Here, it’s impossible for both people to drink at the same time, one of them is taking everything unless the other decides to respond to the object’s violence with a new violence, to break the cup free with the risk of losing the other, scarring it beyond repair if not completely destroying it, or destroying both cups. The work becomes more nightmarish when we learn that its title T42, apart from the pun and the reference to the hit song tea for two, is also the name of a tank. 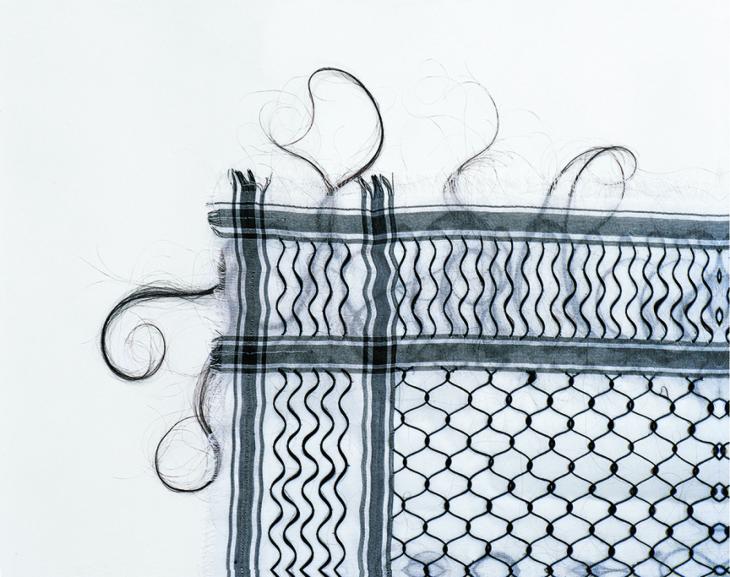 Hatoum’s Keffieh asks no questions: it’s a silent object, all it does is to exist, to provoke. The power of Hatoum’s work lies precisely in its ability to resist explanation, insisting on communicating its meaning in a way instinctive, telepathic, yet crystal-clear.

In an article about Hatoum, Edward Said read in these objects an attachment to a homeland that longer exists. Exile exerts its violence on memory, forcing daily objects to bear the scars and anxieties of their user, who recreates them in his own image: freakish, damaged and stuck between distant realms: "domesticity is thus transformed into a series of menacing and radically inhospitable objects whose new and presumably non-domestic use is waiting to be defined. They are unredeemed things whose distortions cannot be sent back for correction or reworking, since the old address is unreachably there and yet has been annulled (…) memory keeps insisting that these objects were known to us, but somehow aren’t any more, even though memory clings to them relentlessly."

Windows on a lost world

In 2012, Hatoum collaborated with refugee women to produce pieces of traditional Palestinian embroidery, famous for their different patterns relating to different regions of Palestine. She then hung them like laundry in the gallery space. The work seems mundane until its magic is activated by the title: Twelve windows. Suddenly, each of the square-shaped cloths becomes a window overlooking a lost Palestinian town.

The title resonates with the famous formula of Alberti, the Renaissance theorist who described the perfect painting as a "window" on the world, a metaphor that governed spatial conception and perspective in western painting until the 19th century.

Political analyst Taqadum al-Khatib argues that Egypt can, in co-ordination with its European partners, develop a common vision to solve the complex conflict in Libya. For this to ... END_OF_DOCUMENT_TOKEN_TO_BE_REPLACED

At the suggestion of his Arab students, Israeli psychologist Ofer Grosbard created the project "Quranet", which uses texts from the Koran to solve educational problems in schools ... END_OF_DOCUMENT_TOKEN_TO_BE_REPLACED

Libyans have mixed feelings about the EU. On the one hand, they admire what Europeans have achieved, but on the other, they feel let down. Moutaz and Walid Ali report from Tripoli END_OF_DOCUMENT_TOKEN_TO_BE_REPLACED

Turkey's President Erdogan wants to create a second Bosphorus. The cost to the economy and environment would be enormous – and that's why Istanbul's mayor is attempting to stop ... END_OF_DOCUMENT_TOKEN_TO_BE_REPLACED

Libya is in turmoil and no political solution is in sight. The EU's inability to take concerted action in the country, meanwhile, is being exploited by third parties, such as ... END_OF_DOCUMENT_TOKEN_TO_BE_REPLACED

There are only a few thousand Aramaic Christians left in south eastern Anatolia. And they are intent on preserving their ancient culture dating back one-and-a-half millennia. ... END_OF_DOCUMENT_TOKEN_TO_BE_REPLACED
Author:
Yazan Loujami
Date:
Mail:
Send via mail