In her Twelve windows, Hatoum makes an ironic comeback to Alberti, with twelve impossible windows overlooking an abstract homeland made of colours, where all perspective is blocked. Each window hints with its pattern towards the idea of a Palestinian town without showing it, maybe because it no longer exists, or maybe because we’re incapable of facing what it has become. The debris is screened with a folkloric signifier, generating warmth and homeliness while secretly asphyxiating us. At the end, all of Hatoum’s windows put together can’t let in a single breath of air and the gallery room is windowless.

The feminist dimension is crucial again. Embroidery has always been considered a minor craft, deprived from the status of "Art" unlike painting, sculpture or architecture, art forms that were made historically inaccessible to women. In this context, Hatoum builds on the ideas of Alice Walker who, among others, called for a re-evaluation of these decorative objects as the only testimony of a repressed talent that had to express itself with limited tools.

In the Arab context where women had little role before the 20th century in artistic or historiographic practice, embroidery presents an alternative method of representing history, not through a succession of man-made political events, but through physical affinity with colours and patterns connecting families to their land. The act of pinning the cloths evokes the image of a mother or a wife hanging them on a refugee camp rooftop to dry, her only remaining window to a lost homeland is the "safety" of her domestic shores. As for the laundry, it’s literally suspended, in a never-ending waiting state. 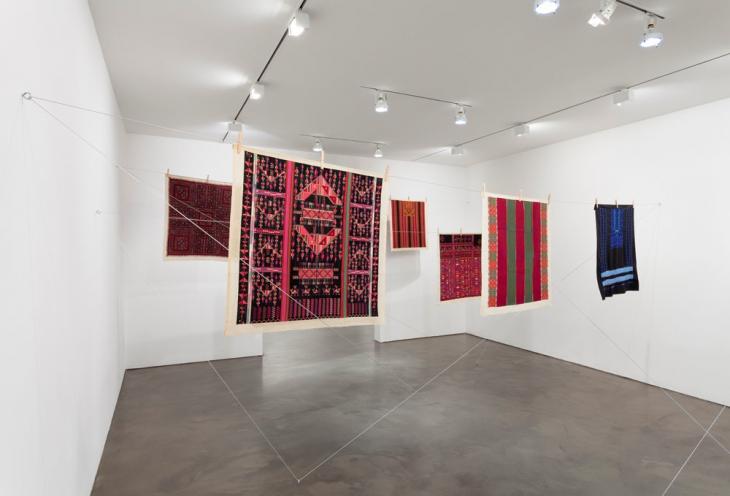 Created in collaboration with refugee women: twelve impossible windows overlook an abstract homeland made of colours, where all perspective is blocked. The debris is screened with a folkloric signifier, generating warmth and homeliness while secretly asphyxiating us. At the end, all of Hatoum’s windows put together can’t let in a single breath of air and the gallery room is windowless

Juxtaposing the rational and the visceral

Besides daily objects, Hatoum’s work is haunted by another typically Arab obsession: maps. In works like Hot spot, or 3D cities, Hatoum’s relationship with maps is reminiscent of the geography teacher in Saadallah Wannous’s 1968 play Party for the 5th of June, who secretly keeps fragments torn away from the Arab world’s map in his drawer, in hope of giving them another life, or at least to grasp why and how we lost them. In Present Tense (1996), Hatoum reproduced the newly made-up map of the Oslo accords by pressing beads into more than two thousand blocks of traditional Nabulsi soap.

The work’s main force lies of course in the soap’s pungent smell, which both refreshes and confuses the memory of Arab visitors walking in, its freshness penetrating the dead sterilised pores of the white gallery space, transgressing its supposed neutrality, exactly as it transgresses the seriousness of the map imposed on it, which will melt anyway as soon as the soap melts.

If borders were violently imposed on the soap/land, the latter refuses the logic of its oppressor, responding differently: the instinctive sense of smell overcomes the more rational sense of sight, liberating the idea of homeland from maps and lands to become something we feel in the air, surrounding us and infiltrating our bodies.

Political analyst Taqadum al-Khatib argues that Egypt can, in co-ordination with its European partners, develop a common vision to solve the complex conflict in Libya. For this to ... END_OF_DOCUMENT_TOKEN_TO_BE_REPLACED

At the suggestion of his Arab students, Israeli psychologist Ofer Grosbard created the project "Quranet", which uses texts from the Koran to solve educational problems in schools ... END_OF_DOCUMENT_TOKEN_TO_BE_REPLACED

Libyans have mixed feelings about the EU. On the one hand, they admire what Europeans have achieved, but on the other, they feel let down. Moutaz and Walid Ali report from Tripoli END_OF_DOCUMENT_TOKEN_TO_BE_REPLACED

Turkey's President Erdogan wants to create a second Bosphorus. The cost to the economy and environment would be enormous – and that's why Istanbul's mayor is attempting to stop ... END_OF_DOCUMENT_TOKEN_TO_BE_REPLACED

Libya is in turmoil and no political solution is in sight. The EU's inability to take concerted action in the country, meanwhile, is being exploited by third parties, such as ... END_OF_DOCUMENT_TOKEN_TO_BE_REPLACED

There are only a few thousand Aramaic Christians left in south eastern Anatolia. And they are intent on preserving their ancient culture dating back one-and-a-half millennia. ... END_OF_DOCUMENT_TOKEN_TO_BE_REPLACED
Author:
Yazan Loujami
Date:
Mail:
Send via mail