The Orientalist, writer and dandy Baron Heinrich von Maltzan was a passionate traveller as well as an attentive observer and a good storyteller. In 1860 he went on a pilgrimage to Mecca. By Andreas Pflitsch 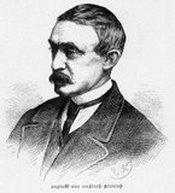 Shunning the codes of political correctness, Baron von Maltzahn's travelogue is characterised by the frank openness of his observations

​​The "wish to enter more deeply and more thoroughly into the way of life of the oriental, and more especially of the Arab people," was the reason which the 34-year-old Baron Heinrich von Maltzan gave for taking upon himself the gruelling journey to Mecca in 1860, to a city "which only twelve Europeans have seen since it was founded."

Maltzan wrote an original, amusing and sometimes hilarious travelogue which can still be read with pleasure, perhaps because it is totally free of "political correctness."

Maltzan was an attentive observer and a good storyteller; his 750-page account is surprisingly entertaining. While it may sometimes be somewhat wordy, it is often as exciting as an adventure story. The contents are full of variety.

Maltzahn's opinion the consumption of drugs

Maltzan explains to us the history of the camel, describes in detail the rituals of prayer, comments on passages of the Koran and gives his opinion on the consumption of opium and hashish.

He tells us about the institution of temporary marriage, "which sweetens the tedium of pious occupation during the Hajj,"and informs us about local alcohol consumption: "I saw as much drunkenness as one otherwise only sees in England and America, which are exemplary nations of inebriates.”

He finds the ceremonies of the Hajj itself somewhat tedious. People are "squashed together like herrings." Although he fulfils his duties as a chronicler assiduously, it is without enthusiasm. The Qaaba seems to him like a "dark, lugubrious mass," and the faithful make on him "an impression which is powerful in its strangeness, even, I would say, in its frightfulness."

Maltzan reveals himself to be a romantic who is tired of Europe. Still in Egypt, he thunders against the railway, which he calls this "mockery of artistic taste and poetical form."

He describes this modern means of transport as "the creation of demons," which "a contemporary Shich ul Islam" does not have the nerve to ban "by a Fatwa," so that to his distress, "Muslim and Kaffir alike, even the pious pilgrims, have to rattle down the deplorable rail tracks from Alexandria."

The sweaty odour of the pilgrims

He describes in colourful detail other inconveniences of the journey. "That, at a temperature of 30 degrees Réaumur, the perspiration of all these Hajjis crowded together reaches considerable proportions, will be well believed by any man. None will envy me the odours with which my nose was offended."

The notably elegant style of Maltzan's prose and his laconic attitude to his experiences make the text highly amusing. "The important news that there is one God and Mohammed is his prophet," he reports, "was made known to me at least a hundred times on the journey between Alexandria and Cairo."

You can imagine the dandy turning up his nose as he says it.

As he describes a gravewatcher who had impressed him by the size of his nose, Maltzan excels himself: "This organ so dominated all else that the rest were reduced to the status of supernumeraries."

The man's mouth is not much better: "It boasted no teeth but one, which seemed to look down proud and bold upon the picture of devastation."

The navel of Mother Eve

The writer's comic talent expresses itself also in his description of a visit to Eve's grave, which is one of the highlights of the book.

According to tradition, the "mother of humankind" was a woman of grotesque hugeness. Her navel was proportionately large. Maltzan calls on "the physiologists to decide whether a person who was five hundred feet long could have possessed a navel which was one and half feet deep."

The traveller observes her extraordinary mausoleum with irony. "After I had paid my pious respects to the navel of Mother Eve, I set about performing my prayerful duties at her other limbs."

He comments drily on the tradition that Ismail was conceived by Abraham and Hagar on the black stone of the Qaaba: "One must come to the conclusion that the patriarch had no very modern ideas of comfort."

The refreshing openness of this travelogue may seem unusual, but it is only political correctness which holds received prejudices in check in modern reports, even though they are by no means absent.

Perhaps it is the lack of solemnity in the author's observations which appeals so strongly to modern readers, since we seem no longer to find such openness possible.

Translated from German by Michael Lawton

END_OF_DOCUMENT_TOKEN_TO_BE_REPLACED
Social media
and networks
Subscribe to our
newsletter