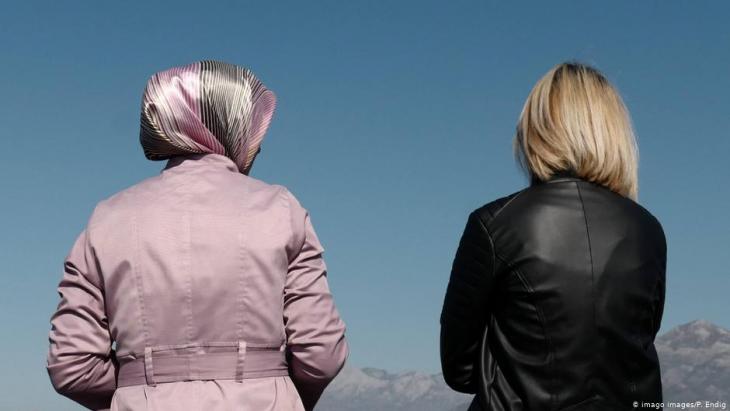 The stereotype of the oppressed Arab woman continues to dominate public discourse throughout Europe. Not only is this skewed image altering the perception of changing notions of family and roles within the Arab world, it is also an expression of our own cultural insecurity, writes Claudia Mende

I’m interviewing a woman in Southern Jordan. She could hardly be dressed more conservatively. Headscarf, long dress, no make-up. And yet, she is clear and uncompromising as she begins telling me about her work as a local councillor in Madaba province. "Women are not content to be held back anymore," she claims, once she has outlined how difficult it was to find her voice in male-dominated, rural Jordan and how she is fighting to have women’s interests taken into consideration on the provincial council. She uses all her influence to empower women and support their projects. She wants to go much further, she says.

Asma Rashahneh, 50, is just one of number of very active Arab women. An enormous wave of social change is underway from Lebanon to Yemen, Jordan to Morocco, from the Emirates to Sudan. Notions of the family and ideas about marriage are changing. Younger Arab women expect more from life than their mothers and are less easily satisfied.

What was the exception a generation ago is increasingly the everyday norm. Women are establishing businesses, feeding their families as single parents, working as sportswomen, artists, lawyers and politicians. In their free time, they are discovering new freedoms beyond the watchful eyes of their brothers or fathers. They are protesting for their rights or fighting for a new, feminist interpretation of the Koran.

Nevertheless, these changes in women’s lives barely feature in public discourse in the West. Instead, the lives of women in the Islamic world are reduced to forced marriage, honour killings and male violence. The publishing industry produces an endless supply of books like "I choose freedom. How I survived forced marriage and oppression and found hope" (published in German by Adeo).

Most Arab women are more likely to have problems struggling to pay the rent, facilitating their children’s educations and their own personal development. Yet in the eyes of popular Western "enlightenment literature", Middle Eastern women are only able to lead independent lives when they cut all ties with their cultural and religious roots. 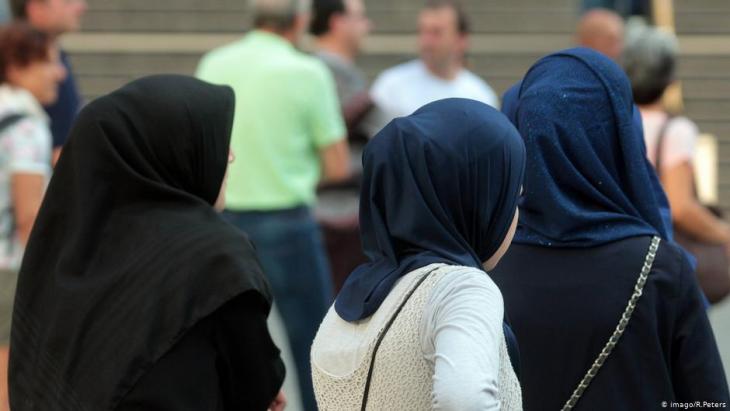 Symbolic of the backwardness and the oppressed Arab woman stereotype: "The image of a woman in a headscarf triggers a slide show in the collective mind, which shows a Middle Eastern woman playing the role of the weak, helpless Other. This hides the reality of the changing lives of women in the region from view" writes Mende

The gleeful obsession with grisly individual cases blocks our understanding of the struggles, aspirations and contradictions in Arab women’s lives. Extreme examples have little to say about the reality of these women’s existence. The media’s ongoing debate about the headscarf only serves to strengthen preconceptions.

Thus, the notion of the "oppressed Arab woman" whose headscarf or hijab is the key symbol of her desolate existence has become an especially persistent stereotype. Today, it is stock fixture in the opinions of a broad middle class. The image of a woman in a headscarf triggers a slide show in the collective mind, which shows a Middle Eastern woman playing the role of the weak, helpless Other. This hides the reality of the changing lives of women in the region from view.

"We" are free and "you" are oppressed

There is no doubt that Arab women experience discrimination where their rights and their society are concerned. Discrimination and sexualised violence are grave problems. They are to be staunchly condemned. Like Christianity, Judaism and reputedly tolerant religions such as Buddhism and Hinduism, Islam has reinforced and legitimised its patriarchal structures over centuries.

Yet the image of the ʺoppressed Arab woman" disregards crucial factors. For a start, it does not reflect the whole breadth of gender relations in the region. In the Arab world, as elsewhere, there are normal families in which parents lovingly encourage their daughters (and their sons) and support them in following their own paths. Alongside the macho pashas, there are fathers and husbands who are happy to compromise and live out their relationships as equals. More than anything, those who fight for greater women’s rights in their society deserve to have their commitments recognised.

This image has also become a stereotype because it is simplistic in its pitting supposedly free sisters in the West against wretched victims in Arab countries. Muslim societies are assumed to have sweeping patriarchal structures, while it is claimed that Western societies are pictures of progressive modernity, says Swiss social anthropologist Annemarie Sancar. Neither of these absolute views are correct.

Home
Print
Newsletter
More on this topic
Women′s rights in the Arab world: The key to changeWomen in Turkey: The headscarf is slippingGender equality in the Middle East: To the benefit of all
Related Topics
Gender, Islam and the West, Islam in Europe, Islam in the U.S., Muslim women, Sexism and violence against women, The Headscarf Controversy, Women in the Islamic world
All Topics

Abortions are illegal in Egypt unless they are necessary to save a married woman's life. But that doesn't stop local women from having one. Egyptian society needs to acknowledge ... END_OF_DOCUMENT_TOKEN_TO_BE_REPLACED

Food prices doubled, salaries halved, banks restricting withdrawals: Egyptians now have the same problems as the Lebanese. But if things get worse here, the fallout will be far ... END_OF_DOCUMENT_TOKEN_TO_BE_REPLACED

Giessen, Eichsfeld, Kusel, Berlin – cars bearing old German number plates are the latest trend on the streets of Cairo. Many Egyptians regard the discarded plates as chic. What ... END_OF_DOCUMENT_TOKEN_TO_BE_REPLACED

Egyptian Sufis have been on the defensive against the country's Islamists for decades. Meanwhile, interest in mysticism is growing among the young members of Cairo’s middle and ... END_OF_DOCUMENT_TOKEN_TO_BE_REPLACED

Chinese President Xi Jinping's visit to Saudi Arabia in December 2022 may have rattled Washington, but it simply highlighted the Arabs’ desire to diversify their foreign relations ... END_OF_DOCUMENT_TOKEN_TO_BE_REPLACED

Asmaa al-Atawna's debut novel "Missing Picture" has been published in German translation (Keine Luft zum Atmen – Mein Weg in die Freiheit). In it, she describes life in Gaza from ... END_OF_DOCUMENT_TOKEN_TO_BE_REPLACED

Comments for this article: The West's gleeful obsession with the 'oppressed Arab woman'

"The West’s scope of responsibility includes direct political support for dictators as well as the fact that industrialised countries have drastically reduced other world regions’ opportunities for development with their own waste of resources. Climate change is hitting North Africa and the Middle East with much greater severity than Europe."

Then we need to qualify what sort of dictators we are talking about: the first dictator of Tunisia gave women more rights than any other Ara dictator. Thus in the 1990s in the second textile hub in Africa, the town of Ksar Hellal, the majority of the labour force in the industry was young women and most of them were not wearing the headscarf, jeans and skirts, and some teenagers even wore shorts in summer. By the way, you should drop the word 'hijab'.

When I returned to the town in a family visit in 2009, I found that at least 60% of the female workers and members of my extended began to wear the headscarf. A male cousin who was expelled from work and made unemployed for more than 10 years contemplated going to Afghanistan! Male and female all felt that there was a war on "Islam" waged in Afghanistan and Iraq. Thus one of the most liberal cities in the country titled towards conservatism.

END_OF_DOCUMENT_TOKEN_TO_BE_REPLACED
Social media
and networks
Subscribe to our
newsletter