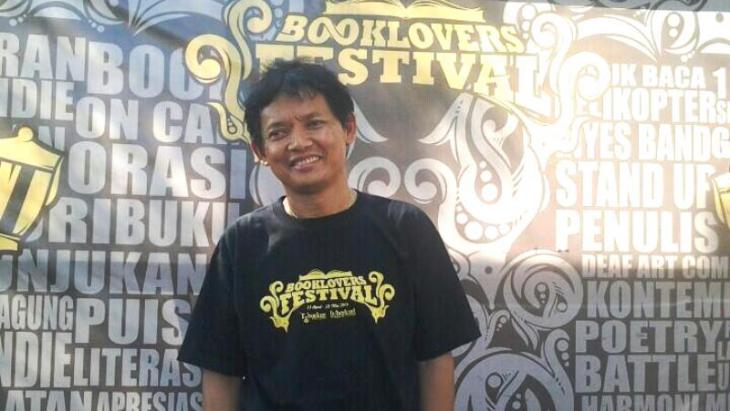 Have there been any fundamental changes in Indonesian literature since the end of Suharto′s long dictatorship? What subjects do Indonesia′s writers focus on these days? And why is cyber-poetry and Islamic literature currently enjoying such popularity in the island republic? Birgit Lattenkamp discussed these questions with Indonesian author Sigit Susanto

Mr Susanto, you have been living in Switzerland for 19 years now. Has it given you a different view of what′s happening in the literary scene in your homeland?

Sigit Susanto: I am struck by serious differences between the two countries. In Europe, literature is one with society. That′s no coincidence: there′s a long tradition of writing and reading in Europe. When I was still in my home country, I read the works of Pramoedya in secret. I was afraid of getting caught by the secret service. But after the fall of Suharto, the love of literature seemed to reawaken in Indonesia. Bookshops are really popular now. People have started founding alternative publishing houses. And literature societies and libraries are springing up outside the big cities as well. But in spite of these positive developments, literature is still seen as elitist.

Indonesia is the guest of honour at this year′s International Frankfurt Book Fair. Are people in your country aware of the event′s huge influence?

Susanto: Yes, there is a lot about it in the media. It′s a hot topic too in literary societies and among writers themselves. People are, however, worried whether Indonesia will succeed in presenting its literature in a way that does it justice. The greatest problem is the small number of works that have been translated.

To what extent do readers learn about the realities of life for Indonesians?

Susanto: The literature tells you something about the people of an island nation, whose day-to-day life mixes the belief in age-old myths with the realities of the modern world. Social injustice, the deficiencies and backwardness of the education system, the consequences of Dutch colonialism, government corruption - Indonesia′s authors write about all of this.

In your view, why has Indonesian literature found it so difficult to get a foothold in the German-speaking market? Could it have something to do with different preferences, or different expectations from German and Indonesian readers as to what constitutes good literature?

Susanto: Our writers write in Indonesian. Whether an Indonesian work makes it on the international market has a lot to do with luck. It often happens because of friendships. For example, if a translator champions a writer and his novel, that sometimes piques the interest of the German and English-speaking publishers. Now and then, foreign students also write their dissertations on an Indonesian novel, and in the course of that, the book gets translated. This means authors with no connections to translators abroad find it much more difficult to introduce their books to an international readership. And our own students of German would rather become teachers or work for German companies, than specialise in translating literature.

And on top of this, different ways of thinking, which of course are reflected in the literature, are a drawback on the international market. Most Indonesians love harmony and shy away from conflicts and frontal attacks. This leads to a dulling of people′s ability to be critical. In Germany, it′s the other way round. People are very critical. Their thirst for knowledge is greater than their concern about disharmony.

Almost 90 per cent of Indonesians are Muslims. The other 10 per cent of the population are Christians, Hindus (mainly on Bali), Buddhists or followers of nature religions. Does people′s religion, or the relationship between religions, play a role in literature?

Susanto: Tahar Ben Jelloun once said that with most literary books in the Arab world, only their titles are literary; the contents are actually a da′wa (Arabic: call to Islam), that is, they proselytise. And he could just as easily have been talking about Indonesia′s religious literature. The majority of Indonesians are practising Muslims. They dominate the reading market. Islamic literature is on the increase in some Indonesian cities. The authors of these books sometimes don′t even dare to use the word "calf", for fear of sinning.

But overall, people tend to avoid the subjects of religion or conflicts between the different religions. They are sensitive subjects, since most Indonesians are active in their religion. And since Achdiat K Mihardja′s novel "Atheis", which caused a great fuss, there haven′t been any novels that address atheism. Religion is the theme of some pop culture novels. That said, the latter tend to deal with religions thought up solely by their authors.

Which of the popular themes in Indonesian prose might be of particular interest to a German reader?

Susanto: Themes relating to the exploitation of people and nature. A lot of underage people work hard on fishing boats in the sea around Indonesia. The public isn′t really aware of it. Or the exploitation of Indonesia′s natural resources by foreign companies. The area of rainforest is getting smaller and smaller. Progress and national development are not happening in harmony with the ecosystem.

In German-language literature, poetry and prose are two literary categories that stand beside each other. A novelist doesn′t necessarily also write poems. But in Indonesia, a remarkable number of writers feel at home in both genres, and even combine them. You occasionally hear about the rise of poem-short-story-novels. In German-speaking countries, people have a thorough respect for the high art of writing poetry. And it seems to me that in Indonesia, poetry is more of a self-evident, even an everyday thing. Would you say that′s right? 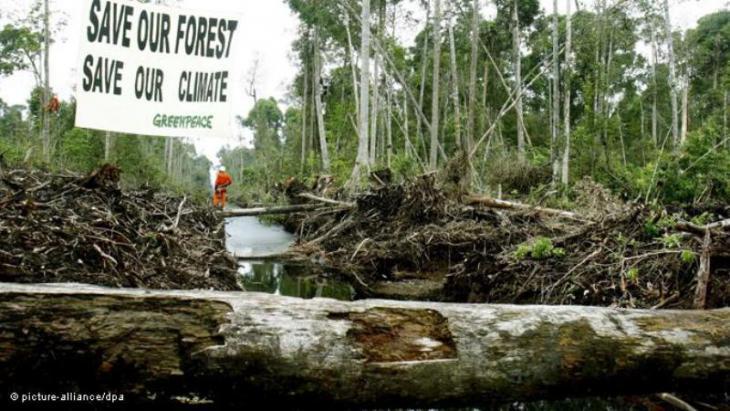 At odds with nature: according to Sigit Susanto, environmental themes, such as the disappearance of the rainforest and the exploitation of Indonesia′s natural resources by foreign companies, are likely to interest German-speaking readers

Susanto: The legendary poet Umbu Landu Paranggi often gives his young colleagues the advice: "write prosaic poems or poetic prose". There is a general tendency for novelists to write poetry as well. On Sumatra, Kalimantan and other islands where the culture has a Malay base, there is the tradition of the "Pantun reading" (Pantun: a traditional Malay poetic form) during a wedding ceremony. There are even professional Pantun reciters. And on Java and Bali a lot of children can recite the stories of the Ramayana (a Hindu epic poem) from memory.

You′ve been the moderator of the Indonesian online literary forum "Apresiasi Sastra" (APSAS, literally: appreciation of literature) for ten years now. How has Indonesian literature developed within that time? Has the discussion culture on your forum changed as well? I′m thinking in particular about the "Reformasi" period, the time after the Suharto dictatorship that was characterised by change and reform.

Susanto: At the start of the "Reformasi" era, people on internet forums were mainly discussing political issues. But over time, more and more literature forums arose. The spread of literature through the medium of the internet was something completely new, and has since attracted many people′s attention. The speed is impressive. Somebody writes a poem and a few minutes later it′s online and can be appreciated by readers. But it was this speed that led to a relatively well-known writer giving cyber literature the epithet "Sastra Tong Sampah" ("dustbin literature"). Internet literature is dominated by young authors, for whom it is their first foray into the public domain. Some of the "internet literature generation" have now managed to get their first books published.

The fact that Suharto was forced to step down, however, doesn′t mean that there is now total freedom of artistic expression in Indonesia. There are still worrying developments, namely the founding of social organisations based on Islam, and associations run by children of the military. Both groups keep threatening and disrupting literary readings, particularly when it comes to Marxist books or those that address gender issues. I′ve experienced it myself. Three years ago our internet forum held its annual meeting in Jakarta, and we looked at ten books in one evening. During the event, secret police and police officers suddenly turned up, and we were forced to hand over all the books and break up our meeting. The previous week, the launch of a book that addressed lesbian love was broken up by an Islamic organisation. 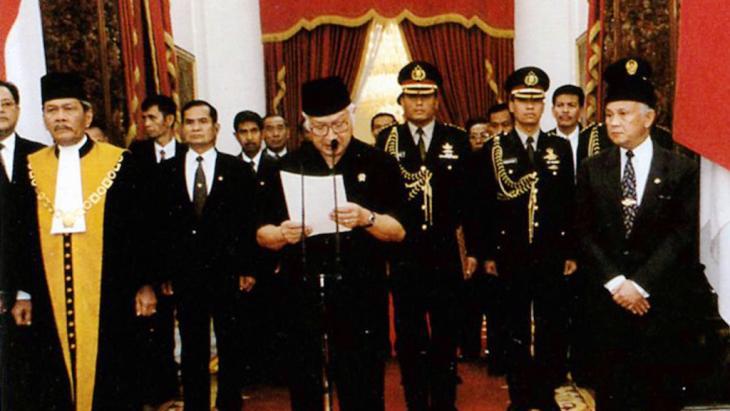 The dictator′s long hoped-for resignation: "The fact that Suharto was forced to step down, however, doesn′t mean that there is now total freedom of artistic expression in Indonesia. There are still worrying developments, namely the founding of social organisations based on Islam, and associations run by children of the military. Both groups keep threatening and disrupting literary readings", adds Susanto

Mr Susanto, this October the eyes of the world will be on Indonesia and its literature. For some guests of honour, the Frankfurt Book Fair has been a springboard to the international literary market. Will this work for Indonesia as well?

Susanto: A lot of authors have taken to social media to express their displeasure at the less than transparent selection process for the books to be presented in Frankfurt. That′s no surprise: the writers that are frequently named in German media are in many cases friends of the head of the organising committee. In our country there a lot of good authors who are disappointed at being left behind. On the list of previous guests of honour I see that Brazil and India have both been invited a second time after an interval of nine or ten years. Maybe Indonesia will be guest of honour again in 2025, and can be better prepared to present itself then.

Do you have a tip for how Indonesia can establish itself permanently in literary terms? Or how cultural exchange with other countries can become more lively and productive?

Susanto: The teaching of literature in Indonesian schools has to be more in-depth. Up to now, children have just been learning the names of writers and the titles of their books off by heart. But they aren′t familiar with the content. We need more libraries, where both reading and creative writing can be encouraged. Plus the government has to get involved seriously and systematically in literary translation projects. In Beijing there is a publisher that publishes Chinese literature in German. That makes the country′s literature accessible to German readers. To promote lasting literary exchange between Indonesia and Germany, we need a publisher like that, too. We also need a guest-author programme between Indonesia and Germany.

Since 2015 there has been a surge of interest in Syrian writing in German translation. In this series of interviews, writers, poets, publishers, and artists in Berlin talk about ... END_OF_DOCUMENT_TOKEN_TO_BE_REPLACED

Tents, mud and cold: refugees contend with miserable conditions in Bosnia & Herzegovina. With the European Union demanding that Bosnia accommodate the asylum-seekers, its ... END_OF_DOCUMENT_TOKEN_TO_BE_REPLACED

Last year was one of a kind. 2020 saw the rapid spread of the coronavirus pandemic, putting a stop to the hajj. Though peace in the Middle East remains a pipedream, there was ... END_OF_DOCUMENT_TOKEN_TO_BE_REPLACED

When news broke that a vaccine against COVID-19 developed by a Turkish-born couple in Germany had promising results, many media reports placed the ethnic background of these ... END_OF_DOCUMENT_TOKEN_TO_BE_REPLACED

A German IT company has started an academy to train Palestinians in software development. Despite the pandemic's challenges, it has managed to run its first boot camp in Ramallah ... END_OF_DOCUMENT_TOKEN_TO_BE_REPLACED

Shortly after the expression was coined and found its way into German discourse, the concept of a "welcoming culture" was already being targeted by Islamophobic circles – and was ... END_OF_DOCUMENT_TOKEN_TO_BE_REPLACED
Author:
Birgit Lattenkamp
Date:
Mail:
Send via mail

END_OF_DOCUMENT_TOKEN_TO_BE_REPLACED
Social media
and networks
Subscribe to our
newsletter