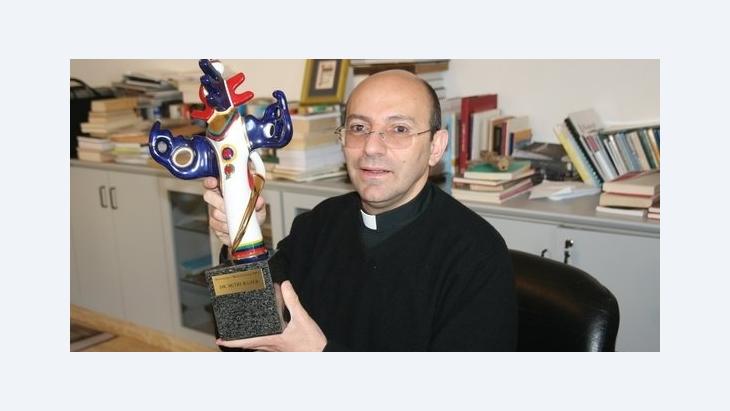 ﻿Mitri Raheb is the founder of the Diyar Consortium, which has made a significant contribution to interreligious dialogue and culture as a means of promoting mutual understanding. Muhannad Hamed spoke with the pastor in Bethlehem about dialogue work and his new book about the Arab Spring

You were recently honoured with the German Media Prize in recognition of your humanitarian and cultural work. What moved the jury to award you with this prestigious prize?

Mitri Raheb: The jury awarded me the prize for our 16 years of commitment towards creating a space for hope and dialogue in Palestine. We originally began as a very small organization with a staff of only one person. Over the course of the past 16 years, we have developed into the third largest employer in Bethlehem with more than 100 people now working for the Diyar Consortium. More than 60,000 people have participated in our programmes.

In addition, we established the Dar al-Kalima College, which is the first college in Palestine offering degrees in theatre, music, and film. We also founded the first congress centre in Bethlehem with the aim of making the city a more attractive location for international conference tourism. Furthermore, a theatre, a cinema, a number of schools, and a sport association have since been established. 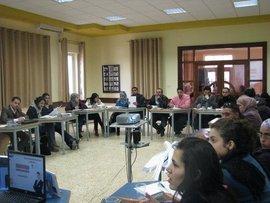 "16 years of commitment towards creating a space for hope and dialogue in Palestine": conference at the Diyar Consortium in Bethlehem

​​However, what I find much more significant than these bare facts is that we have succeeded in attracting back home many young Palestinians from abroad, who believe in the development of the country and our society. For these reasons, my co-workers and I were awarded the prize.

Could you speak a bit about the work of the Diyar Consortium?

Raheb: We focus on three main areas. The first is the cultural sphere, as this is directly related to our identity. We want to develop a dynamic Palestinian identity. The same holds true for the area of elementary and secondary school education – we want to develop a young leadership elite. In addition, we operate our own publishing house, which publishes books on civil society, culture, and women's issues.

What is the personal significance of this prize for you?

Raheb: It shows me that there is an ever-increasing interest in the Palestinian problem. What takes place in Palestine is followed intensively and comes under close scrutiny. The prize is therefore an honour not only for me, but for the entire Palestinian people. I have already been the recipient of other prizes, but this prize is especially important, as it is conferred by prominent corporate and financial figures in Germany.

Yet, wasn't there also criticism in Germany at your winning the award?

Raheb: Yes, indeed, there was. On one hand, I was strongly attacked by the pro-Israeli lobby in Germany, which demanded that my award should be revoked. 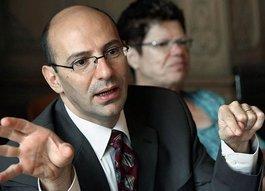 "Pluralism is something positive and it is what the Arab world needs." Mitri Raheb, pastor of the Evangelical Lutheran Christmas Church in Bethlehem

​​However, many prominent people from the church and politics in Germany, including prominent representatives of the Jewish community in Germany, raised their voices in defence of my claim to the prize. The reason for this challenge was my criticism of Israeli occupation policies and, of course, the fact that I have made these criticisms as an Arab Christian and that I champion the cause of ensuring the existence of Christians in Palestine.

Your book "The Arab Spring and Christians in the Middle East" has recently appeared in Arabic. What forecasts do you make in the book?

The book also hopes to provide an Arab perspective of the region, in particular, a perspective based in a respect for plurality. What I mean by this is that Christians can only enjoy a future in the region when Muslims also enjoy such a prospect. And conversely, Muslims would face a much bleaker future without Christians. This means that a way has to be found so that all citizens feel that their freedom and dignity is respected.

Many Europeans fear that Islamist groups will seize power in the Arab world. Are such fears justified?

Raheb: I do believe that the Islamic agenda is experiencing a strong upsurge. The truly significant question, however, is what form of political Islam will win the upper hand in the current developments in the Arab world. There are many varieties of political Islam – for instance, the Turkish, Saudi Arabian, Afghan, and Dubai models. 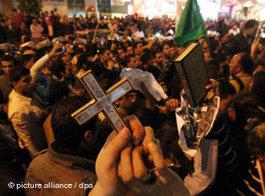 Raheb: "Our concern is to promote a pluralistic civil society in which freedom is respected, regardless of religious affiliation. We have only one option – to create a common future"

​​To repeat the question – which form of political Islam will triumph in the Arab Spring countries? Will it be a pluralistic and open Islam or a closed off form of Islam? A hermetically sealed Islam is not only dangerous for Christians, but also for the Muslims themselves. In general, Muslims would find themselves worse off in terms of culture and civilization and far less pluralistic without the influence of Arab Christians. Pluralism is something positive and it is what the Arab world needs.

Do you believe that because of this historical transformation, we are now headed towards a conflict between Islam and Christianity?

Raheb: I am not an adherent of the thesis of an Islamic-Christian conflict. I regard this position as arising from a Western view of events. It is wrong to speak of conflict and coexistence in a polarizing fashion. Our concern is to promote a pluralistic civil society in which freedom is respected, regardless of religious affiliation. We have only one option – to create a common future.

Can religion play a positive role in helping to solve the Israeli-Palestinian conflict?

Raheb: Regrettably, I regard many of the manifestations of religion in the region, whether Christian, Muslim, or Jewish, as not being positive. Unfortunately, religiosity has since become a synonym for fanaticism. There is a very interesting citation from the Bible. "Whoever says that he loves God, but hates his brother, is a hypocrite." It is a shame, but religion is increasingly taking on the guise of tribalism and confessionalism.

One hears all the time now – "I am a Christian," "I am a Sunni," or "I am a Shiite." I hold the view that such boundaries are not compatible with true faith. On the contrary, true faith means that one loves God and one's Muslim brother at the same time – and that he loves his Christian brother in turn.

Many phenomena that cloak themselves in the name of religion are actually tribalistic or political in nature. In these cases, religion is merely a means to a political end. If only all the so-called faithful really followed their consciences! True faith, on the other hand, is a real help in securing peace and resolving the conflict.

Bethlehem is generally regarded as a model for Christian and Islamic coexistence. Why?

Raheb: It is based on our common history and good neighbourly relations between Christians and Muslims. Muslims also attend many of our schools. These relationships in everyday life and among classmates form the backbone of our coexistence.

Home
Print
Newsletter
More on this topic
Matt Beynon Rees: ''Hamas and Fatah Have an Interest in the Conflict Continuing''Rabbi Arik Asherman of Rabbis for Human Rights: A Different Way of Understanding JudaismDaoud Nassar's ''Tent of Nations: ''Peacefully Holding the Fort
Related Topics
Christians in the Islamic world, Democracy and civil society, Dialogue of Religions, Israeli-Palestinian dialogue, Minorities in the Muslim world
All Topics

Any reconciliation between Turkey and Syria’s Assad regime would have disastrous consequences for many Syrians, explains Syria expert Kristin Helberg END_OF_DOCUMENT_TOKEN_TO_BE_REPLACED

There are signs of an imminent normalisation of relations between Turkey and Syria. This would allow Erdogan to score political points domestically before the upcoming elections ... END_OF_DOCUMENT_TOKEN_TO_BE_REPLACED

As Syrian camps housing families of Islamic State fighters get more dangerous, there are calls to bring children out, even if the mothers don't want to go. The idea of separating ... END_OF_DOCUMENT_TOKEN_TO_BE_REPLACED

Where are the measures to deal with the looming challenges facing the Arab world? In this commentary, Marwan Muasher warns that the region is in grave danger of falling behind ... END_OF_DOCUMENT_TOKEN_TO_BE_REPLACED

At the end of every year, the team at Qantara.de gives you a run-down of the ten most-read articles on the site over the past 12 months. Here is a quick overview of the stories ... END_OF_DOCUMENT_TOKEN_TO_BE_REPLACED

Social engagement is often motivated by religious factors. A new book explores the background to these community efforts and appraises how effective they are in helping to ... END_OF_DOCUMENT_TOKEN_TO_BE_REPLACED
Author:
Muhannad Hamed
Date:
Mail:
Send via mail

END_OF_DOCUMENT_TOKEN_TO_BE_REPLACED
Social media
and networks
Subscribe to our
newsletter