A Metaphor for the Dark Side of Civilisation

Was the city state of Babylon in ancient Mesopotamia really a den of iniquity or was it in fact the world's first city of learning? Berlin is currently showing a comprehensive exhibition that dispels the myths about Babel and tells the truth about the ancient city of Babylon. Ariana Mirza reports

The exhibition is organised by the Staatliche Museen zu Berlin, the Musée du Louvre and the Réunion des musées nationaux, Paris, and the British Museum

​​Visiting the "Babylon – Myth and Truth" exhibition is a bit like being part of the march into "Babylonian Exile". Crowded together, exhibition visitors slowly wind their way past the blue-tiled walls of the Processional Way. They are inching their way towards the monumental city gate that was built approximately 2,600 years ago in honour of Ishtar, the divine mother of Babylon. German architects brought the remains of the structure to Berlin in the early twentieth century. Since 1930, the reconstructed Ishtar Gate has been the highlight of every visit to the Museum of the Ancient Near East in Berlin's Pergamonmuseum.

In 1980, less than 100 kilometres south of Baghdad, where the fragments of the Ishtar Gate were once dug out of the desert sands, the Baath Party celebrated a festival with the theme: "Yesterday Nebuchadnezzar, today Saddam Hussein". The Iraqi dictator wanted to revive the memory of his country's ancient past – a past that the West looked down on and the Orient had long forgotten. Until then, the interest of the Arab world in pre-Islamic societies had been marginal.

For his part, Saddam Hussein was certainly less interested in any historical facts than in legitimising his secular power by creating arbitrary links between his regime and the rule of the pre-Islamic dynasties. 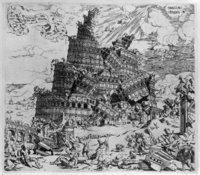 Over 800 objects are exhibited, among them statues, reliefs, votive offerings, architectural fragments, and documents. Pictured: "The collapse of the Tower of Babel" by Cornelisz Anthonisz, Etching, 1547

​​And so Babylon, which is dogged by a poor reputation in the West, was used by the Iraqi dictator to add weight to his regime. But what was Babylon really like? In conjunction with the Louvre in Paris and the British Museum in London, approximately 900 artefacts were brought together for the Berlin exhibition, which provides information about everyday life in a highly developed civilisation.

Cuneiform scripts, jewellery, grave-goods, documents, and architectural models conjure up the image of a society that achieved much in the fields of philosophy, technology, and art. Visitors are reminded that the culture of Mesopotamia is closely linked to the emergence of sciences like astronomy and law.

The exhibition also emphasises the fact that the ancient Oriental tradition of knowledge in Babylon influenced not only the history of Greek culture, but also that of Jewish and Islamic culture. Very few people today are aware of this universal heritage.

Human civilisation is sceptical about itself 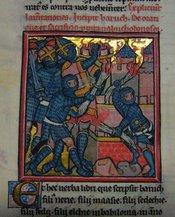 ​​Following the exhibition of some of these artefacts in Paris and London, the exhibition was extended for Berlin. This additional section focuses on the origins and propagation of the myth of the "Whore of Babylon". Works by contemporary artists as well as pop culture products show that Babylon remains a negative symbol to this day.

Curator Moritz Wullen explains why this distorted image of "Babel" is so much more prevalent than the memory of an early society built on knowledge: "Human civilisation is sceptical about itself. All of these negative images, which are born out of fear, have remained pretty much the same down through the millennia." 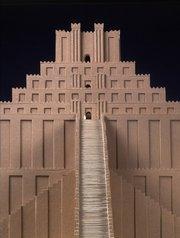 Beyong the myth? Reconstruction of the ziqqurat of Babylon – the "true Tower" of Babel; model after Hansjörg Schmid

​​The Bible was largely responsible for the prevailing image of a depraved society that was doomed to decline. Babylonian achievements in architecture and the largely peaceful co-existence of various ethnicities in a single society were viewed by Christianity as human arrogance and declared a failure. This gives cause for reflection because much of what the Babylonians succeeded in doing over the centuries is now considered by secular societies to be an ideal worth striving for.

The organisers of the exhibition in Berlin also emphasise that Iraq can certainly be proud of its archaeological and ideological heritage: "Iraq is a country with a huge cultural tradition." In 2003 it became clear that this tradition still needs to be protected. In that year, serious damage was caused when American forces set up a temporary military camp in the middle of the Babylon excavation site. Ironically, the troops were originally stationed there in order to protect the site from attackers and looters.

Romansque Propaganda in Stone
Anti-Islamic Agitprop
Saracens in salacious poses, and beasts at prayer, facing Mecca: an exhibition of photos at Berlin's Museum of Islamic Art follows the trail of anti-Islamic propaganda in mediaeval Christendom.