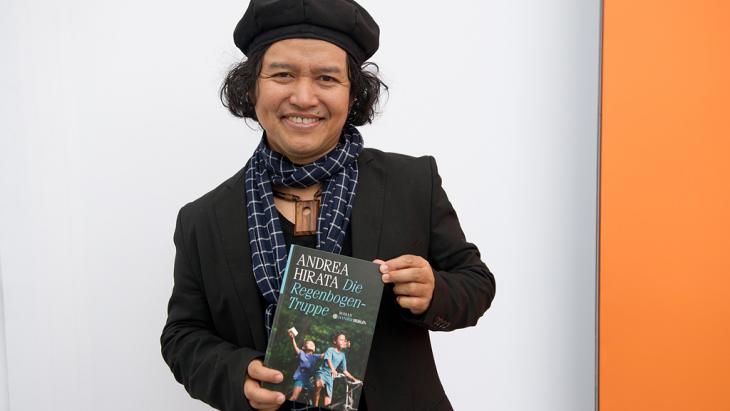 With a population of 240 million, Indonesia is the fourth-largest country in the world. Its literature, however, is barely known in Europe. This makes it all the more gratifying that German and English translations of Andrea Hirata's "The Rainbow Troops" are now bringing Indonesian literature to a broader readership beyond the small circle of Indonesia fans.

Loosely based on Hirata's own childhood, the book tells the story of the young Malay Ikal and his friends on the small island of Belitung off Sumatra. They all attend a school that is run by the Islamic Muhammadiyah organisationa and constantly threatened with closure and collapse. The likeable story gives readers plenty of insights into Indonesia's multicultural society.

These primary school children come from extremely poor families. Their parents work in local mines, as coolies or as fishermen. It borders on a miracle that their children get an education at all; their parents cannot afford to pay the usual school fees.

From zero to hero

The story, which Hirata has lovingly dedicated to his own teachers, testifies to the impressive chances the school offers the children in life: Andrea Hirata made it from the Malay charity school to European universities and went on to become a bestselling writer in Indonesia. Published in 2005, "The Rainbow Troops" has sold over five million copies, a record-breaking figure on the Indonesian market. In view of a successful foreign marketing campaign, it is also considered the bestselling Indonesian novel at international level.

The phenomenal reception of "The Rainbow Troops" in a country where reading books is not exactly a common leisure activity suggests that Hirata is the first Indonesian writer to find a literary form of expression for widespread hopes and desires. 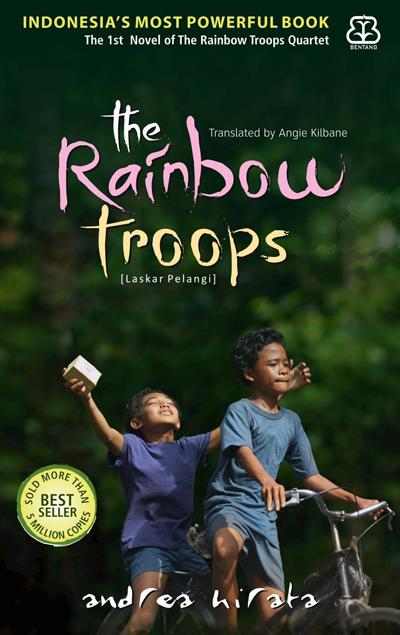 As enthusiastic commentators never tire of saying, his novel is two things above all else: "inspiring and motivating". It conveys the message that with a few tragic exceptions, the world is an open door for those who dare to dream and fight for their dreams.

The fact that this "zero to hero" tale has triggered such a wave of enthusiasm shows how great the need for successful role models and inspiring life stories is.

Its deliberate marketing as an autobiographical story seems to play a key role, even though a closer look reveals various implausible elements. Imagination and reality blend together not only in the novel, but also in the author's real-life statements, sometimes causing confusion.

For example, Hirata tells deeply moving stories at readings about his former school friend Lintang, the scientific wunderkind whose genius is conjured up by grandiloquent comparisons in the book, and whose tragic fate – he of all children had to break off his schooling – has touched millions of readers. Yet while the media hype around the novel brought former pupils onto TV talk shows, no one but Hirata remembers Lintang, not even the teacher Bu Muslimah.

The majority of Indonesia's literary critics have ignored the novel. It is often the case here too that bestsellers that appeal to the masses are not necessarily of top literary quality.

Nurhady Sirimorok, a social scientist who himself works in remote regions of Sulawesi, which faces similar problems to Hirata's island, wrote a slim volume entitled "The Dreamer Troops" in 2008, accusing the novel of taking an Orientalist perspective.

Sirimorok criticises the unquestioned idealisation of "progress" and uncritical adoption of the allegedly universal Western standards of rationalism and modernity, as well as the notion that climbing the social ladder, getting a European university education and being successful in your profession are the only things worth striving for in life.

It is true that the idealised portrayal of the teachers and the eager identification with Western knowledge do reveal a desire for an intact moral universe that promises a smooth transition from traditional Indonesian life to the modern Western world with its liberal ideology of success. The only role left for Islam is that of a rather general ethical compass. Moreover, the only hindrances on the path to a glorious future seem to be traditional superstition and the poverty of the exploited local population.

The first English version was brought out by an Indonesian publisher in 2010. Andrea Hirata worked with his translator, Angie Kilbane, and, as he mentions on his website, changed a number of sections for cultural reasons. Interestingly, no mention is made of the fact that extra protagonists and a central plot strand (a heroic struggle against the mining company) were added to the English version.

These additions make the story more socially critical, but by no means more realistic. What motivated the writer and translator, for instance, to reduce the female teacher's age from her early twenties in the original to only 15 in the international version? The German translation also leans more closely on the English version than on the Indonesian original in most places.

In this reworking for the international market, many of the elements that made the Indonesian version so characteristic have been removed. Buoyed by a fantasy of greatness frustrated only by dire poverty, the children are presented as autodidactic geniuses. 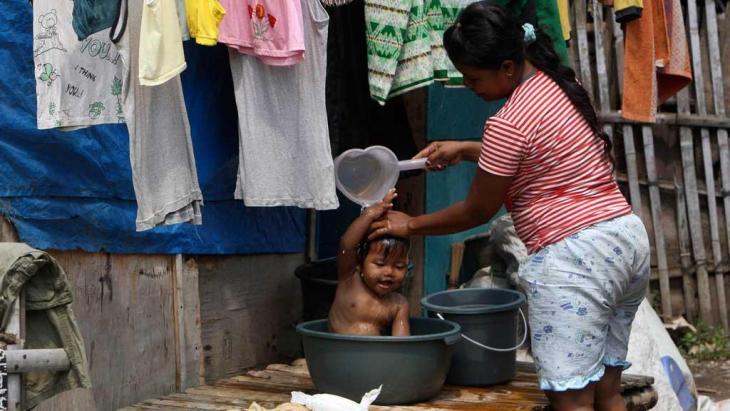 With over 240 million inhabitants, Indonesia is the fourth-largest country in the world. Its capital, Jakarta, is not only the country's political and economic hub, it is also its most densely populated city, where poverty and affluence stand side by side

The book is almost obsessive in its name-dropping of famous Western people. It is rare for local phenomena from the charity school's own world not to be followed by instant comparisons to Western inventors or explanations using academic terms. It is as if the Malay Islamic world only becomes significant by placing it within Western frames of reference.

However, it may be that precisely this aspect was what made the book so successful. Urban middle-class readers have an opportunity to identify with Hirata's ostensibly Western viewpoint of the children's poverty-stricken lives and to participate in the fantasy of success. Without poverty and exploitation, the book seems to be saying, we'd be just as clever, modern and successful as the Westerners we so admire.

Hirata's Orientalist perspective has also – and this is the positive side to the book – triggered a veritable tide of motivation in Indonesia, inspiring countless people to campaign for the right to education for poor children in remote areas.

This citation of Western terms, with which Hirata conjures up his affinity to the global West – as do many contemporary Indonesian writers – has been lost in the international versions. Thus, something has been erased, not because words or ideas were unfamiliar, but by using fragments of our language, the narrator is responding to very different literary and cultural expectations.

This means that for Western readers, "The Rainbow Troops" is a story from Indonesia, but one where the author's Indonesian voice is no longer audible.

In Indonesia too, hardly anyone is aware that the first Indonesian book to be so successful on the international market is a very different version to the one people read in Indonesia – that it had to be rewritten to be "good enough" for Western expectations, to put it in extreme terms. And so, the mutual misunderstanding remains unspoken.

Andrea Hirata "The Rainbow Troops". Translated from the Indonesian by Angie Kilbane.

Water buffalo and oxen have been part of the work in Indonesian fields for centuries. But the draught animals are no strangers to sport either, as can be seen in two traditional ... END_OF_DOCUMENT_TOKEN_TO_BE_REPLACED

According to the latest Reuters tally, more than 2.54 million people are now reported to have been infected by the novel coronavirus globally and 177,004 have died. As Muslims ... END_OF_DOCUMENT_TOKEN_TO_BE_REPLACED

Around the Islamic world, lockdowns and curfews are being extended and religious ceremonies are being cancelled outright in the hope of slowing the spread of COVID-19. Here’s the ... END_OF_DOCUMENT_TOKEN_TO_BE_REPLACED

While some are beginning to protest the lockdown, others are unable to bury their loved ones in accordance with Islam. Here’s the latest from across the region END_OF_DOCUMENT_TOKEN_TO_BE_REPLACED

Coronavirus continues unabated. Iran remains a hub of infection, war-torn Syria has recorded its first case and Yemen is bracing itself for the worst. Here’s the latest from ... END_OF_DOCUMENT_TOKEN_TO_BE_REPLACED

As COVID-19 sweeps across the globe, it is forcing religions to adapt and take action to prevent infection. But experts warn against using the crisis to fuel conspiracy theories. ... END_OF_DOCUMENT_TOKEN_TO_BE_REPLACED

Comments for this article: One novel; two very different versions

Well, it is shocking coda. How come the writer and translator change many parts of the novel. It is translating not modifying. Some questions must be elaborated. Andrea Hirata is not a good writer in attitude toward Indonesians and Bangka Belitung people. He wrote with the his anger toward the society. I hope Western people aware about thus. Thank you, sorry Andrea, I just said what I heard from the my interviews with Bangka Belitung teachers and many relatives.

END_OF_DOCUMENT_TOKEN_TO_BE_REPLACED
Social media
and networks
Subscribe to our
newsletter