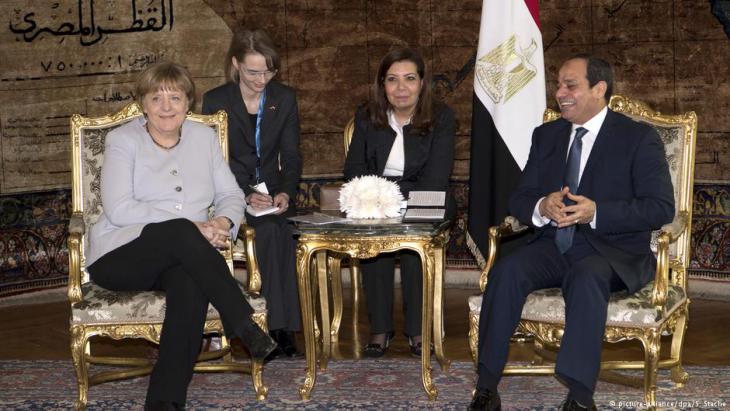 No head of state looks forward to meeting a national leader known for the brutal silencing of his critics. Had Angela Merkel pursued a more courageous line in foreign policy, she could have saved herself a deal of discomfiture. By Matthias Sailer

Once more, a German Chancellor has decided to pay a state visit to a country ruled by a despot. The Germans are hoping to obtain President Sisi's support in warding off the streams of refugees, to close lucrative deals for the German economy and to encourage Egypt's constructive co-operation in attempting to resolve the numerous crises in North Africa and the Middle East.

Back in November 2016, the Board of Governors of the International Monetary Fund agreed to lend Egypt urgently needed funds amounting to over US$12 billion. The IMF determined that the country would actually require about $35 billion over the next three years to stay afloat. A prerequisite for the $12 billion loan was that financial support would also be granted to Egypt by a number of other multilateral and bilateral donors (including Germany) in order to close the funding gap. The IMF, in which Germany and other European economic powers as well as Japan and the USA hold considerable sway, has been instrumental in bringing these donors on board for Egypt.

The main reason for the IMF's sudden generosity was the increasing reluctance on the part of Saudi Arabia and the United Arab Emirates to continue to pour billions into the Sisi administration. Since the fall of President Mohammed Morsi in July 2013, the two Gulf States have given Cairo loans and grants amounting to at least $30 billion. 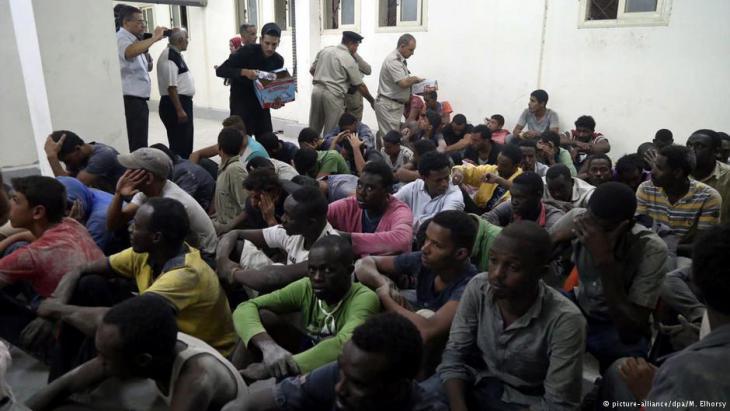 Marriage of convenience in the name of self-interest: during a joint conference in Cairo, Merkel has promised Sisi additional support in securing Egypt′s long border with Libya. Europe′s main concern is to prevent another migration route becoming established through Egypt. Experts however are wary of entering refugee deals with countries like Egypt. Migration researcher Jochen Oltmer argues that in the process Europe would be financing and stabilising autocratic regimes, thereby weakening any opposition and civil society organisations still further

The change of heart in the Gulf came about in particular due to geopolitical differences with Egypt revolving mainly around Iran, as well as the low price of oil, but also because of rising dissatisfaction at Sisi's failure to revive the Egyptian economy despite this massive influx of aid.

The path was thus open for the first time since Morsi's fall for Germany, Europe and the USA to try and assert a positive influence on Egypt's development. Without foreign capital, the Sisi administration would have long since gone under due to the acute shortage of foreign currency alone. The president thus had no choice and was forced to seek out new benefactors and bow to their conditions.

The pressure under which Sisi finds himself is even more evident when we consider the economic plight of the Nile nation: unemployment among young adults in Egypt is estimated at over 40 percent and more than half of all young Egyptians live below or just above the national poverty line. The per capita growth rate of the GDP is just two percent and public debt has soared in recent years.

These economic problems are closely coupled with Sisi's repressive domestic policies. The government suppresses almost any expression of criticism and tens of thousands of political prisoners overcrowd the prisons, with torture and the disappearance of opponents the order of the day.

At the latest since 14 August 2013, when security forces under then-Defence Minister Al-Sisi murdered 1,000 followers of the Muslim Brotherhood in a single day in the massacre of Rabaa, the regime′s repressive tactics have escalated in a spiral of radicalisation and violence that has destabilised the country. The climate of uncertainty is made even worse by the intermingling of this conflict with the activities of regional offshoots of the IS and other terrorist groups. 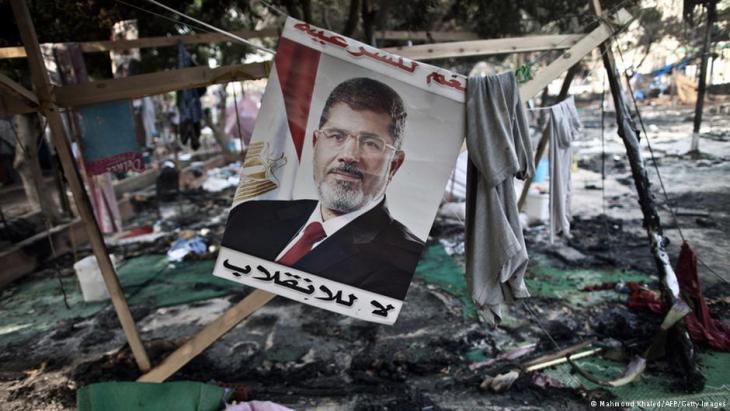 Political opponents face brutal repercussions: at the latest since 14 August 2013, when security forces under then-Defence Minister Al-Sisi murdered 1,000 followers of the Muslim Brotherhood in a single day in the massacre of Rabaa, the regime′s repressive tactics have escalated in a spiral of radicalisation and violence that has destabilised the country

At the same time Sisi is waging war against any form of independent civil society. Human rights organisations have been closed down and their employees put on trial. Journalists languish in open-ended pre-trial detention and anyone pointing their finger at rampant corruption and nepotism also lands in the clutches of the justice system. All of this is creating an explosive cocktail of poverty, despair, violence and insecurity that could flare up at any time. And the situation is especially toxic for the economy.

The usual macroeconomic reforms stipulated by the IMF are utterly insufficient to defuse the situation, because such reforms can only take effect under the right political conditions. These include above all legal security, combating cronyism and corruption, ensuring fair competition and restraining the security agencies that are today involved in all administrative decisions.

The security forces are currently among the most important economic players in Egypt. Entrepreneurs have little chance of competing with them. Along with the above measures, repression in the country has to stop and a reconciliation process must be initiated to curtail the escalating radicalisation and violence in the country.

It would have been possible for the IMF to tie the granting of loans to political stipulations along these lines. Measures to improve governance are after all covered by the IMF regulations. The financial resources allocated by donors outside the IMF could also have been contingent on the fulfilment of certain conditions. 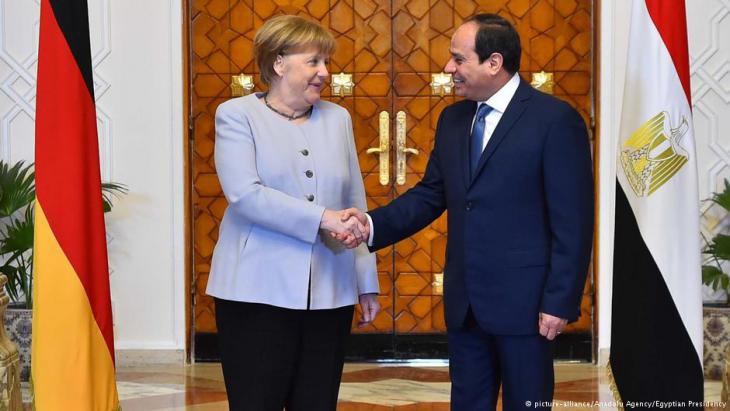 Shaking hands with despots: if the billions of dollars granted to Egypt had been tied to stipulations such as good governance, basic democratic rights and freedom of speech, Western politicians could now travel in good conscience to Egypt and would not be vulnerable to the charge of co-operating with dictators at the expense of human rights in order to enforce their own interests

And yet, although the Gulf States' flagging willingness to support Egypt was already evident by the beginning of 2016, Germany and its western partners reacted inadequately and squandered a unique opportunity by putting together an IMF package that was bound to the usual reforms, but did not specify measures to combat the above-described causes of Egypt's predicament.

Instead of taking advantage of this opportunity to finally tackle Egypt's deep-seated problems and thus come to the aid of its people, European politicians are again travelling to the Nile to curry favour with a despot. It seems downright absurd that Sisi of all people is regarded as a force standing for stability and the fight against terrorism, when his repressive policies are in fact one of the main causes of the instability and uncertainty in Egypt.

Combating the refugee problem is nothing but rhetoric

If the billions of dollars granted to Egypt had been tied to some of the conditions described here, Western politicians could now travel in good conscience to Egypt and would not be vulnerable to the charge of co-operating with dictators at the expense of human rights in order to enforce their own interests.

An auspicious opportunity presented itself, it was pointed out in good time and there was no lack in sound analyses of the causes of Egypt's problems either. But instead of seizing this opportunity and compelling the Egyptian government in a concerted manner using an extensive aid package to undertake positive reforms, the Western states are again falling back needlessly on old patterns of despondent foreign policy.

Dealing with the refugee problem by combating the causes behind it thus remains nothing but rhetoric, just as in past decades. The Western powers are not only harming the people of Egypt but also themselves by opening the floodgates to dependency on and blackmail by Sisi, Erdogan & Co.

Welcome to the world of Al Qasar, where Arabic music collides head-on with punk and psychedelic to create something powerful and beautiful. "Who Are We" is a raucous, subversive ... END_OF_DOCUMENT_TOKEN_TO_BE_REPLACED

Egyptian authorities have Mada Masr in their sights once again after critical reporting. But the editor of the country's last independent news source is adamant they will continue ... END_OF_DOCUMENT_TOKEN_TO_BE_REPLACED

Like Christianity, Europe's history is one of migration. Both have strong roots in the Orient and in cultures thousands of years old. Cultural historian Bernhard Braun invites us ... END_OF_DOCUMENT_TOKEN_TO_BE_REPLACED

When she ascended the throne, millions of Muslims still lived under British rule. Later, Elizabeth II appealed for tolerance in a multi-religious society. She was the first ... END_OF_DOCUMENT_TOKEN_TO_BE_REPLACED

END_OF_DOCUMENT_TOKEN_TO_BE_REPLACED
Social media
and networks
Subscribe to our
newsletter