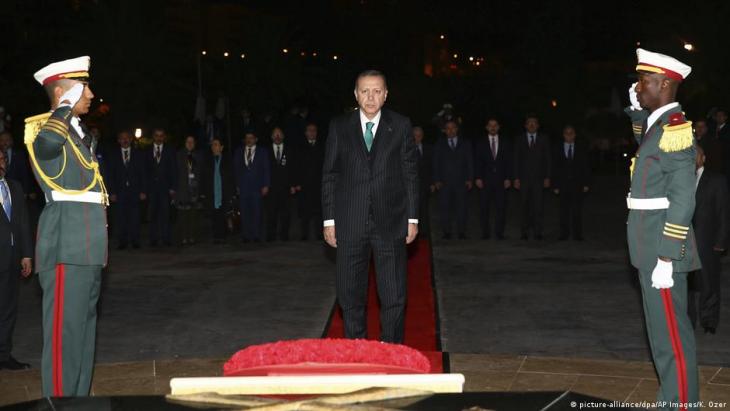 Recep Tayyip Erdogan, disappointed by the European Union’s reluctance to integrate Turkey into its ranks, has re-directed his country’s diplomacy toward the Maghreb and Africa to expand Turkey’s sway in the Mediterranean, writes Dalia Ghanem

Recently, some Algerian media outlets reported on tensions between Algeria and Turkey over alleged Turkish support for Rashad, an Algerian Islamist group. Rashad is made up of former members of the banned Islamist party, the Islamic Salvation Front. The Turkish Embassy released a statement explaining that these were "allegations" and "false rumours". While the Algerian authorities have issued no official statement on the matter to date, unofficially diplomatic sources in both Algiers and Ankara sought to discredit such reports.

Whatever the truth, a confrontation is unlikely between the two sides because for the last decade and a half Turkey has gained considerable leverage in North Africa in general, and Algeria in particular. Located at the crossroads of Sub-Saharan Africa, the Middle East, southern Europe, and the Mediterranean, the Maghreb countries are becoming part of Turkey’s zone of influence. Turkey has focused on expanding its reach to advance its economic, energy, and military objectives, as cornerstones of a larger role in Africa and the Mediterranean.

When it comes to its economic agenda, Turkey views the Maghreb as an entry point into new African markets, beginning with the Sahel countries. Turkish investments have steadily increased in Africa, where Turkey’s trade with the continent was estimated at $25.3 billion in 2020. The Turkey-Africa Economic and Business Forum has helped to boost such links.

Significant investment and trade with Algeria

Turkish products have proven successful in the Maghreb countries, after over a decade and a half of improved economic ties. In 2005 Turkey signed an Association Agreement with Tunisia, and followed this up a year later with a trade agreement with Morocco and a Friendship and Co-operation Agreement with Algeria. 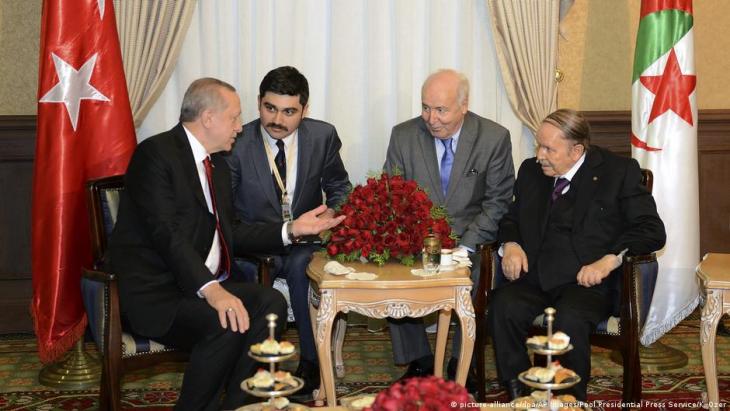 An entry point into new African markets: for the last decade and a half Turkey has gained considerable leverage in North Africa in general, and Algeria in particular. Algeria is Turkey’s second largest trading partner in Africa after Egypt, with exchanges amounting to $4.2 billion in 2020. Turkey, which has invested $3.5 billion in Algeria, has also become the leading foreign investor outside the hydrocarbons sector. It is also present in the construction, textiles, steel, food, and energy sectors. The recent signing of seven co-operation agreements on energy, agriculture, and tourism has further strengthened relations between the two countries

Trade with Algeria has been the most significant among the three countries. Algeria is Turkey’s second largest trading partner in Africa after Egypt, with exchanges amounting to $4.2 billion in 2020. Both sides would like to expand trade to $5 billion in 2021, surpassing Egypt. Turkey, which has invested $3.5 billion in Algeria, has also become the leading foreign investor outside the hydrocarbons sector, which is more than France.

Turkey’s prominent position in Algeria is expected to last as the relationship has been strengthened by the recent signing of seven co-operation agreements on energy, agriculture, and tourism.

When it comes to the energy sector, Turkey has also had significant interests in Algeria, which is Ankara’s fourth largest gas supplier. The Algerian state-owned Sonatrach and the Turkish Petroleum Pipeline Corporation have extended until 2024 a natural gas agreement in which Algiers will supply 5.4 billion cubic metres of gas annually to Turkey. Sonatrach is also working with Ronesans Holding on building a petrochemical complex in Ceyhan, in southern Turkey’s province of Adana. The investment is worth $1.2 billion. 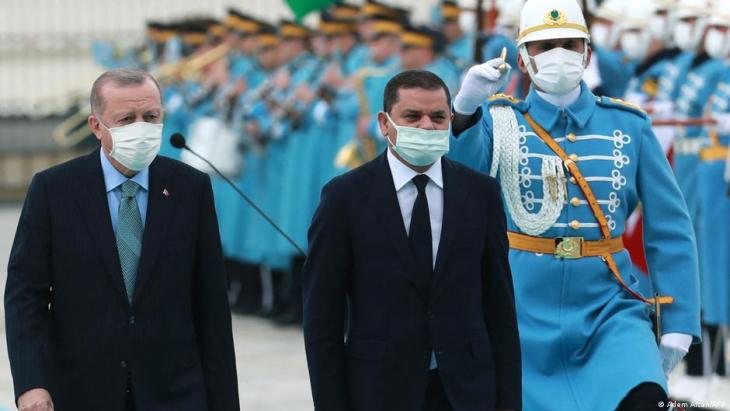 The growing Turkish footprint: "While European countries, particularly France, may not be happy with this involvement in an area traditionally under French influence, they will have to adapt. Ankara’s desire to present itself as an alternative to France, confront the Europeans, and portray itself as a defender of the Muslim world, has been welcomed in a region fed up with the long relationship with a former colonial power," writes Ghanem

The agreement would, in theory, allow them to establish a corridor from southwest Turkey to northeast Libya and claim drilling rights in an exclusive economic zone (EEZ). However, this has led to tensions with Greece and Cyprus over violations of their internationally-recognised EEZs.

A third priority of Turkey is to advance its military influence throughout North Africa. Libya is a case in point. In January 2020, it deployed military personnel and used its TB2 armed drones to halt the advance of General Khalifa Haftar’s Libyan National Army against GNA areas, before forcing him to retreat. Turkey is seeking to protect both its geostrategic interests, including the maritime agreement with the GNA, and its economic interests.

Algeria, which has a nearly 1,000-kilometre border with Libya, remains cautious about Turkey’s approach to Libya, though it doesn’t openly oppose it. The Algerian authorities want to preserve a facade of neutrality in the conflict, even if they too favour the GNA. This has made them effective allies of Turkey in Libya. Algeria cannot do without Turkey there, otherwise it would be marginalised in the conflict.

But nor can Turkey do without Algeria and Tunisia, which share borders with Libya, providing Ankara with land access to the country if that is required. Meanwhile, Algiers continues working on the diplomatic front to find a political settlement to the Libyan conflict that would involve all actors and avoid foreign interference.

Beyond Algeria and Libya, developments in other parts of the Maghreb show how Ankara’s military policy is tied in to its broader aim of expanding its regional reach. Turkey’s long-term strategy is to dominate the African arms market.

In December 2020, for example, Tunisia and Turkey signed a military agreement in which Turkey offered Tunisia $150 million in interest-free loans to purchase Turkish military equipment. The agreement also included co-operation in the military industrial sector, creating common platforms for research, development, the production of spare parts, and the joint export of military material.

This co-operation should allow Ankara to establish a solid industrial base in Tunisia to export its military material throughout the Maghreb and Africa. Indeed, having opened 37 military offices in Africa, Turkey is the country with the most such offices on the continent. In the past three years it has also entered into military agreements with Chad (2019), Niger (2020), and Somalia (2021), and is now eyeing other African markets for further military co-operation.

Turkey is seeking to build up political support in the African continent. Erdogan, disappointed by the European Union’s reluctance to integrate Turkey into its ranks, has redirected his country’s diplomacy toward the Maghreb and Africa to expand Turkey’s sway in the Mediterranean. The Turkish footprint will continue to grow.

While European countries, particularly France, may not be happy with this involvement in an area traditionally under French influence, they will have to adapt. Ankara’s desire to present itself as an alternative to France, confront the Europeans, and portray itself as a defender of the Muslim world, has been welcomed in a region fed up with the long relationship with a former colonial power.

Dalia Ghanem is a resident scholar at the Malcolm H. Kerr Carnegie Middle East Center in Beirut, where her work examines political and extremist violence, radicalisation, Islamism, and jihadism with an emphasis on Algeria.

The history of Jews and Muslims is far more entangled than you might imagine – but you have to listen out for it. In "Recording History", Christopher Silver takes us on a sonic ... END_OF_DOCUMENT_TOKEN_TO_BE_REPLACED

Welcome to the world of Al Qasar, where Arabic music collides head-on with punk and psychedelic to create something powerful and beautiful. "Who Are We" is a raucous, subversive ... END_OF_DOCUMENT_TOKEN_TO_BE_REPLACED

The southern shores of the Mediterranean Sea are losing sand faster than almost anywhere else. The ecological and economic damage is immense. The good news is, there are ways to ... END_OF_DOCUMENT_TOKEN_TO_BE_REPLACED

To understand Islamic mysticism, we must first clear up a number of misconceptions, as Marian Brehmer writes in his essay – part 1 of a new series on Sufism END_OF_DOCUMENT_TOKEN_TO_BE_REPLACED

END_OF_DOCUMENT_TOKEN_TO_BE_REPLACED
Social media
and networks
Subscribe to our
newsletter