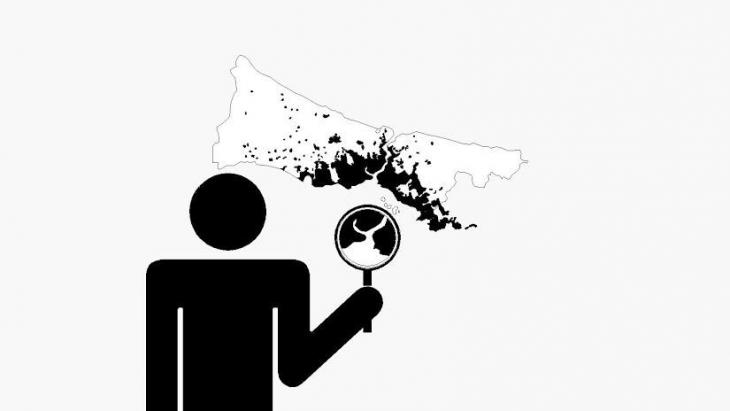 Turkey′s construction industry is booming. As a key pillar of the nation's economy, President Erdogan's ambitious goal is to ensure it catapults Turkey into the world's top ten economies by 2023. But the AKP's ″urban transformation project″ has many downsides. By Ceyda Nurtsch

Istanbul is an enormous building site. Large-scale construction projects are underway across the city. The city that is already home to millions continues to grow beyond its capacity, and must expand. For example, a third airport is in the planning, a third bridge over the Bosphorus, not to mention a canal right through the heart of the city. At the same time, Istanbul is to become smarter and more contemporary. Entire neighbourhoods are being torn down or redeveloped.

The AKP launched this gigantic demolition and redevelopment project, which is a joint venture involving the public sector and private investors, in 2004. But there has been growing criticism of this ″urban transformation project″, resulting in the Gezi protests of the summer of 2013. Demonstrations were held over plans to build a shopping mall on the city's central Taksim Square.

Yelta Kom and Hasan Cenk Dereli were among those who took part in these 2013 rallies. Both architects are founders of the non-profit organisation Herkes Icin Mimarlik, or ″architecture for all″. Their chief issue with current urban policy is that it is not transparent, but that it is being ″imposed from above″. But even more important to them is the question of what is happening in places that, unlike Taksim Square, are not in the spotlight. In remote rural areas, for example.

In 2011, together with a couple of fellow students, they founded the organisation aimed at finding architectural solutions to social problems. Today, hundreds of volunteers work on a variety of projects. These range from seminars on the establishment of parks and playgrounds, right through to the re-design of empty buildings into schools equipped for the disabled. All participation is on a voluntary basis and financed through donations. Both men, who are in their early 30s, believe that architecture should be inclusive – geared towards the particular needs of the people. 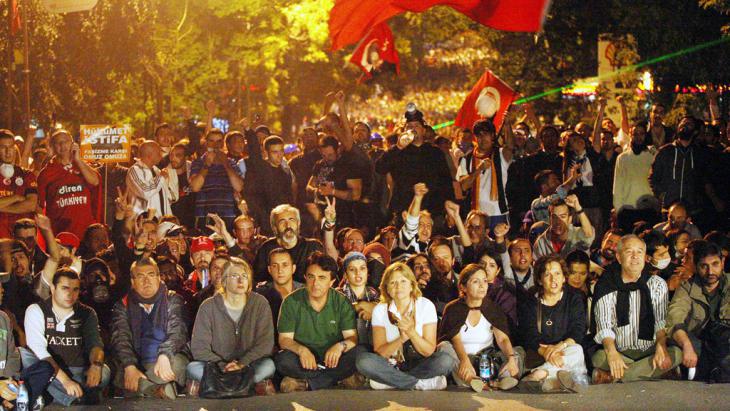 Pioneers of the movement protesting the ″urban transformation of Istanbul″: in summer 2013, Istanbul residents voiced their opposition to a government building project in Istanbul’s Gezi Park – a project which would have meant cutting down most of the park′s trees. A court order halted work on the project

They draw attention to the fact that the ″conquest of the public domain″ began long before the AKP. They view their involvement as part of a long tradition of urban resistance. Architects, engineers and activists have been protesting the demolition of areas of informal government housing, known as ″gecekondu″, since the 1970s, explains Dereli. Both architects say that since the Gezi protests, there has been a sense that more people want to have a greater say in the design of the areas in which they live and work.

Currently composing his thesis on the subject of international urban development, Yasar Adanali is also critical of the AKP′s urban policy. He explains that the concept of ″urban transformation″ has been kept deliberately vague on paper. It may refer to restoration, the creation of new jobs, improving the housing situation, or safeguarding against earthquakes. ″But in practice, it is all about the economic potential of the location in question,″ says Adanali. ″Reconstruction measures are carried out without considering the historic features of the building or the needs of those living there.″

This makes weak and marginalised population groups especially vulnerable to the urban transformation process: such as the Kurds in Istanbul′s Ayazma district, the Roma in Sulukule, or the migrants in Tarlabasi. Sooner or later they have all had to leave their neighbourhoods. Either because they were forcibly relocated, or because they could no longer afford their rent.

In the quest for alternatives, Adanali and his team have taken on the task of making the invisible sides of the transformation visible. For example, they are compiling maps, such as one entitled the ″forced eviction map″. With his Beyond Istanbul team, he also organises themed city tours, focusing among other things on the ecological impact of these mega projects.

Adanali is basically in favour of improvement and change, but not in the way currently favoured by the public and private sectors. Focusing solely on the generation of capital is, in his view, an unsustainable approach.

The journalist Miyase Ilknur goes a step further in her criticism. She says that in the case of the AKP, it is clearly about the transfer of capital, since the construction projects are located in the most lucrative parts of the city and the contracts are always given to the same companies – companies with links to the government. One example is Tarlabasi, an area designated for redevelopment just below Taksim Square. It is scheduled to be modernised by a firm called Calik, and the company′s CEO is the son-in-law of President Tayyip Erdogan. 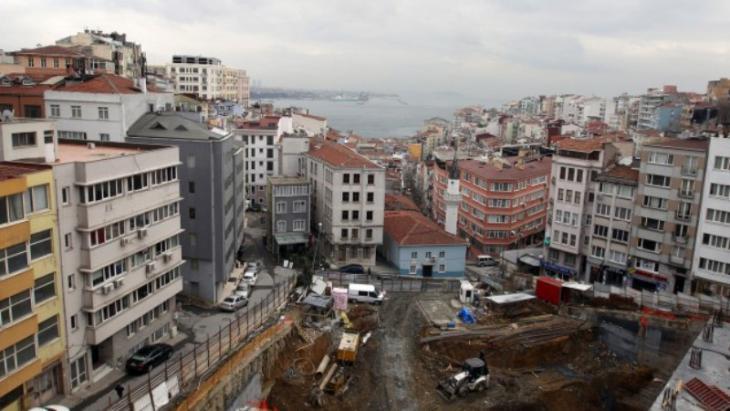 Construction boom at the expense of residents: Istanbul, a metropolis of 15 million, is considered Europe’s fastest growing city. In recent times, centuries-old districts have been demolished – to the benefit of major investors looking to acquire lucrative real estate

″If this is really about making houses better able to withstand earthquakes, why is work not starting in areas along the fault line, in Avcilar and Pendik, for instance?″ wonders the journalist. She concludes that this kind of transformation destroys the environment, violates human rights and annihilates the diverse mosaic of communities established over time, as well as the historic fabric of the houses themselves.

Transformation of these neighbourhoods is followed by immediate waves of speculation: prices rocket, former tenants can no longer afford to live in their old houses and are forced to move away. Or they are directly forced to relocate. Take Sulukule, for example, in the Fatih neighbourhood, the oldest Roma settlement in the world: when the first bulldozers rolled in there in 2005 with a police escort, to demolish the houses, the move triggered a wave of protests.

One of those who joined the outcry was the economist and urban activist Funda Oral. Together with other activists she founded the ″Sulukule Platform″ and attempted to prevent the demolition of the area. In vain. She is however convinced that her work was not for nothing.

″People became aware of the Roma's situation, they saw that they have their own culture and today we have our first Roma members of parliament,″ she says. Moreover, she adds that the Roma themselves developed greater self-confidence. ″They are prouder of their identity and at the same time, they can see the problems they face within society – for example, the fact that most of them are uneducated,″ says the activist. Ironically, the constitutional court later declared the demolition of the neighbourhood to be illegal.

Funda Oral is convinced that, these days, it would no longer be possible to demolish a neighbourhood in such a manner. When she takes stock of the overall situation in Istanbul, she is certain: sooner or later, this urban model will fail. Driving small businesses and locals out of a neighbourhood to make way for hotels and cafes filled by wealthier people from elsewhere – in her view, it′s an unsustainable vision.

But until that day, it remains to be seen how many forests will be cut down, how many historic buildings destroyed and how many residents driven from their homes. There is, however, a glimmer of hope: the administrative court is currently examining an application from the architectural association. The latter claims that the redevelopment plan for the district of Tarlabasi, with its listed buildings, is unlawful.

Research project "The Global Qur'an", brainchild of Professor of Islamic Studies Johanna Pink and sponsored by the European Research Council, analyses the history and ... END_OF_DOCUMENT_TOKEN_TO_BE_REPLACED

Each year, thousands of people travel to the Turkish city of Konya to attend a week-long series of events and ceremonies that mark the death of the 13th-century Islamic poet, ... END_OF_DOCUMENT_TOKEN_TO_BE_REPLACED

A wedding extravaganza of bright colours, flowers, feasting and dancing, yet the bride, Nefie Eminkova, who comes from Bulgaria's Pomak – Muslim – minority, can see none of it. ... END_OF_DOCUMENT_TOKEN_TO_BE_REPLACED

A new Netflix drama series showcasing Istanbul's Jewish community in the 1950s depicts a once multicultural city. It is a production that pulls no punches, exposing dark chapters ... END_OF_DOCUMENT_TOKEN_TO_BE_REPLACED

Every year in December, the team at Qantara.de takes a look back at the articles that proved most popular with our readers. This year is no different. Here is a run-down of the ... END_OF_DOCUMENT_TOKEN_TO_BE_REPLACED

END_OF_DOCUMENT_TOKEN_TO_BE_REPLACED
Social media
and networks
Subscribe to our
newsletter