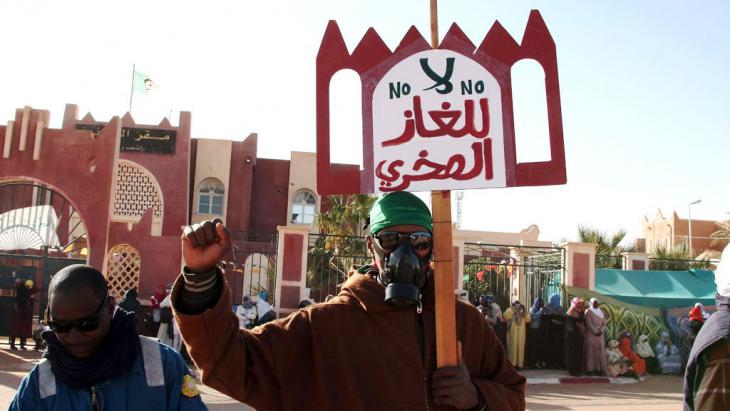 Anti-fracking protests in Algeria
Revolution rising up from the desert?

Pressure is growing on the fragile stability and the altmoded political system in Algeria. An increasing number of new factors are adding to the burdens faced by the authoritarian leadership: the low price of oil, chaotic conditions in neighbouring countries and border areas, the recurrent unrest between Arabs and Berbers, and the large gap between the booming coastal regions and the structurally weak periphery. Shale gas may now prove to be the straw that breaks the camel's back.

Ethnic conflicts have already been smouldering for a year in Ghardaïa, in the southern part of the country, and since early 2015 these have been joined by strikes and mass protests against fracking plans in the desert town of Ain Salah.

There has been massive resistance to shale gas production at the latest since the first test drilling was carried out in late December 2014 – so massive, in fact, that the leadership of the National Liberation Front (FLN) feared the dawning of an Arab Spring in Algeria. The protesters, many of them women, chanted slogans reminiscent of the Arabellion, only on this occasion, they were voicing their opposition to further drilling.

Who profits from fracking?

"The anger of the people in the south should not be underestimated," warned the party's Secretary-General Amar Saadani. At the same time, he suggested that "foreign forces" (meaning in particular France) were behind the protests, deliberately fomenting unrest to stir up a revolution in the desert. The allegation seems absurd, seeing as France stands to profit the most from the shale gas projects on Algerian soil, as Saadani also knows. 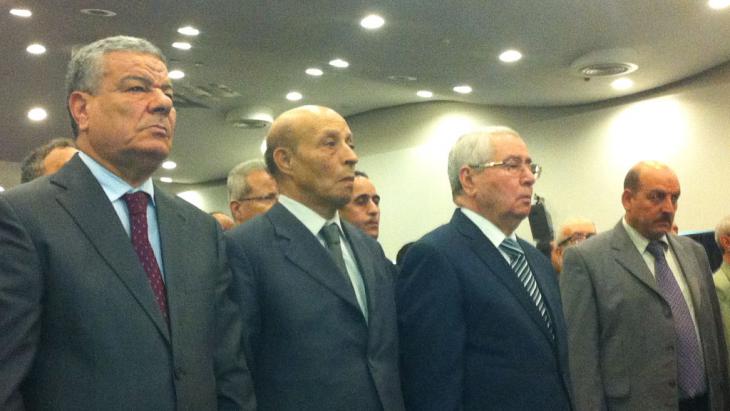 Abstruse conspiracy theories: FLN Secretary-General Saadani (seen here on the left) has suggested that "foreign forces", meaning France in particular, were behind the protests in a bid to deliberately foment unrest to stir up a revolution in the desert

The Algerian Council of Ministers approved nationwide extraction of shale gas through fracking in May 2014, without consulting parliament, hearing the opinions of experts, or involving the public in the decision or at least informing them sufficiently.

The reason for the quick legislation is a deal made by the Algerian oil and gas monopolist "Sonatrach" with European companies located in countries where fracking is prohibited due to the unforeseeable ecological and health consequences. Companies such as the French oil company "Total" are trying to set up their fracking operations abroad for this very reason.

Algeria is a rentier state

Algeria has been exploiting its huge gas and oil reserves on a grand scale since the early 1970s, and these resources account today for an estimated 98 per cent of the country's exports. The low oil price, while it might be an economic good news story elsewhere, has brought the country to the brink of an economic crisis. The production of shale gas would open up a new source of revenue for the rentier state.

According to the "World Resources Institute", Algeria has the third largest reserves of shale gas worldwide after China and Argentina. So why is the idea facing such public resistance now of all times, when Algeria's economic policies have been thus far patiently tolerated? It is because – as so often in the past – the general public will reap only disadvantages from the new development. And there are plenty of those.

Unpredictable consequences for health and the environment

In fracking, a mixture of water and chemicals is forced under high pressure up to five meters horizontally into the rock layer holding the gas. The components of the mix have been classified in various expert opinions (for example by the German Federal Environment Agency in 2014 and 2012) as toxic, environmentally hazardous, harmful to health, as an irritant and as corrosive. After successful gas extraction, part of the fracking cocktail stays behind in the ground, while another portion returns to the surface. As to what happens to this liquid then, no one really knows. It may permeate the groundwater or be otherwise integrated into the environment, to be eventually absorbed in some way by humans and animals.

Now banned in European countries such as France for these very reasons, fracking is to be made possible in southern Algeria. Companies such as "Total" benefit here from the legal situation in countries that are not as scrupulous about the observance of human rights. And they use such countries as fields for experimentation.

The issue is made all the more fraught by the fact that this kind of economic and social treatment of countries such as Algeria has a long tradition. During and after the colonial period, France carried out nuclear tests on Algerian territory, not far from the current fracking project area. Nuclear weapons four times as strong as the bomb that fell on Hiroshima were ignited both above- and below-ground in the 1960s. The devastating long-term consequences for human health and the environment are now well known. 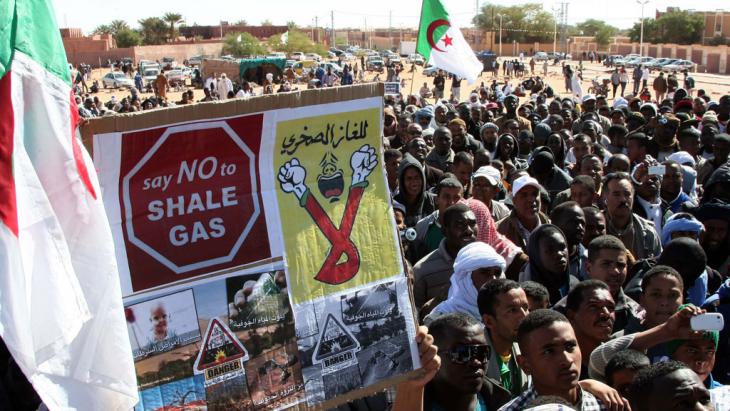 Local uprising against ecocide and authoritarian paternalism: Protests against fracking continue in the desert town of Ain Salah, which has a population of almost 30,000, increasing the pressure on Algeria's totalitarian government led by President Bouteflika

At the time, intellectuals including Michel Foucault described the colonies as "heterotopias" and "anti-places" that allowed colonial powers like France to do things that would be unthinkable within their own society and on their own soil.

Wasting water in a region with chronic water shortages

Large amounts of water are needed for fracking. But where is all the water supposed to come from in a region where this is a commodity in short supply? Even less will then be available for people's daily needs. Due to the contamination of fresh water reservoirs with toxic substances, water would be lacking in particular for agriculture, where severe shortages already exist. Because of the predominance of the export business with oil and gas, the Algerian economy lacks diversity, relying almost completely on oil revenues. Almost all food products are imported as a result, due to a stunted agricultural sector that lacks the expertise and technologies to produce these itself. Water is so valuable in Algeria that there is a whole ministry dedicated to the "blue gold".

In addition, funds dedicated to the fracking project are displacing much-needed investments in the infrastructure. In the Algerian Sahara, government control is largely absent when it comes to ensuring the supply of water, electricity, medical care, education and jobs.

The posters carried by the protesters read: "Yes to solar energy, no to fracking". And yet the Algerian state spends scarcely any money at all on renewable energies. This is in stark contrast to the neighbouring country of Morocco, which has for some time been investing in green energy and, as a desert state, mainly in the solar thermal sector.

"We are living on a volcano"

The government's lax handling of environmental issues and the health of its citizens could potentially be the downfall of the Algiers regime in the long-term. State powers are already increasingly hampered by feet of clay. The superannuated government of the FLN guard, which still derives its legitimacy from the struggle for independence from France, has missed its chance for rejuvenation. President Bouteflika is seriously ill, with a successor nowhere in sight.

The system is shored up by what is known as the "Trabendo" middle class, which thrives on the informal economy and the lack of political and economic regulations. Exacerbating the situation are the chaotic conditions in almost all neighbouring countries. Libya in particular exports its Islamist IS terrorists to the border regions, but offshoots can also be found in southern Tunisia and the Sahara areas that border on Mauritania, Mali and Niger. The Ministry of Defence reports the discovery of terror cells on an almost daily basis.

The struggle of the Tuareg rebels from the separatist MNLA party is another issue causing the government great concern. Perhaps even more so than Libya Algeria, as the largest country on the African continent, oversees a huge territory that is heterogeneous and difficult to control. "We are living on a volcano," said the Algerian writer Boualem Sansal recently, aptly describing the current mood in the country.

Home
Print
Newsletter
More on this topic
Ethnic conflict in Algeria: A struggle for power and recognitionInterview with Yasmina Khadra: "The Algerian regime is pulling all the strings"Algeria and the Arab Spring: Opting for the Status Quo Rather than Experimentation
Related Topics
Abdelaziz Bouteflika, Algerian Opposition, Arabellion, Bedouins, Economy, Oil, Globalisation, Social movements
All Topics

The history of Jews and Muslims is far more entangled than you might imagine – but you have to listen out for it. In "Recording History", Christopher Silver takes us on a sonic ... END_OF_DOCUMENT_TOKEN_TO_BE_REPLACED

Welcome to the world of Al Qasar, where Arabic music collides head-on with punk and psychedelic to create something powerful and beautiful. "Who Are We" is a raucous, subversive ... END_OF_DOCUMENT_TOKEN_TO_BE_REPLACED

The southern shores of the Mediterranean Sea are losing sand faster than almost anywhere else. The ecological and economic damage is immense. The good news is, there are ways to ... END_OF_DOCUMENT_TOKEN_TO_BE_REPLACED

To understand Islamic mysticism, we must first clear up a number of misconceptions, as Marian Brehmer writes in his essay – part 1 of a new series on Sufism END_OF_DOCUMENT_TOKEN_TO_BE_REPLACED

Since Spain reversed its position on Western Sahara in favour of Morocco’s autonomy plan, Algeria has suspended its long-standing friendship treaty with Madrid. The diplomatic ... END_OF_DOCUMENT_TOKEN_TO_BE_REPLACED

Comments for this article: Revolution rising up from the desert?

In the current situation globally, this tight oil is a clear truth to the theory of ' peak oil'. The age of 'easy' oil is over. Asia is industrialising, getting a 'western' living standard. Islamic people will have to pay the price. There is not enough 'easy' oil to go around. This process is more labor intensive, government will certainly be pushing this. Ironically this is an opertunity to empower people rather than opress them. Fraked oil needs allot of cash and a drill site quickly depletes. In america fraking is Obamas way of avoiding dealing with peak oil, he did afterall save detroit car industry, to turn around now and claim that cars and air travel will be cost prohibitive in 50 years would change the world forever and make all his efforts pointless.

END_OF_DOCUMENT_TOKEN_TO_BE_REPLACED
Social media
and networks
Subscribe to our
newsletter