"Islamophobic – and Proud of It"

Fundamentalist Christians are using populist slogans to incite against Muslims, whom they see as the new source of danger for Europe. The number of internet users who visit their websites is alarmingly high. Claudia Mende reports

Ever since Muslims have begun to assert their presence in German society by building mosques, reactions have ranged from irritation to abuse

​​The group calls itself "Deus Vult Caritatem" – Latin for "God wants love." But it disseminates a fair amount of bad feeling. "Deus Vult Caritatem" caused uproar at a series of Munich city council information events in July. The Islam expert and lawyer Matthias Rohe held a talk on "The German constitution and sharia" which had to be broken off in a tumult. Several days later Rohe received a death threat via e-mail, and he published it on his homepage.

"Deus Vult Caritatem" was the title of a document issued by Pope Urban II in 1099, calling on the faithful to join the first Crusade and expel the Muslims from the Holy Land. The website of Deus Vult, which was launched at Easter 2007 to mark Pope Benedict XVI's 80th birthday, issues a modern version of the same call to arms: "It is now high time to react once again and defend western civilisation as well as everything else which is threatened by radical Koran-Islam."

"They do plenty of damage"

The modern crusaders plan to save western civilisation from Islamisation by "an attempt to re-evangelise our own country, and a careful mission towards Mohammedans, whom we should try, in a peaceful and amicable way, to liberate from the embrace of 'The Prophet.'"

Radical Christians are mobilising against Islam. "The groups may be small," says Andreas Renz, in charge of interreligious dialogue at the Catholic Archdiocese of Munich, "but they exert an enormous amount of pressure with letters to newspapers, with telephone calls to the archdiocese and with their activities at public meetings. They create an atmosphere of insecurity and they do plenty of damage."

While the two big churches in Germany, the Catholic and the Lutheran-reformed, aim to teach about Islam objectively, and while many communities are active in interreligious dialogue, fundamentalist Christians see Islam as the new threat to Europe. Andreas Renz believes they represent a broad spectrum, which stretches from the far right to the very centre of society.

Trying to stop the distribution of the Koran

Deus Vult is a small player. Better known nationally is the "Federal Association of Citizens' Movements to Protect Democracy, Homeland and Human Rights" or BDB ("Bundesverband der Bürgerbewegungen zur Bewahrung von Demokratie, Heimat und Menschenrechten"). Its objective, according to its own information, is to work "against the development of fundamentalist Muslim parallel societies in Germany," and against Muslims "who make ever more demands intended to force European citizens to accept parts of the sharia."

Among the demands of the BDB are "the examination of Article 4 of the German constitution (religious freedom) in respect of its application to the political religion of Islam." It also want to see a ban on the building of minarets and "the outlawing of banks and financial services providers offering investments in Europe which conform to sharia and thus permitting the sharia economic model to be introduced into our economic model."

One member of the organisation tried to gain an injunction from a court in Hamburg to stop the distribution of the Koran, on the grounds that it was guilty of the offence of "offering insult to confessions, religious groups and associations representing world views," as well as "the offence of racial incitement." The court refused to hear the case.

The BDB sees the East German priest Roland Weisselberg as a fine role model: he burnt himself to death on Reformation Day 2006 to protest against the threat of Islamisation in Germany.

Plans for an anti-Islamic party

The most prominent figure in the Anti-Islamic movement is a former journalist with the Frankurter Allgemeine Zeitung newspaper, Udo Ulfkotte, who wrote a book called "The War in our Cities" ("Der Krieg in unseren Städten"), and who runs an organisation called Pax Europa. Ulfkotte intends to found an anti-Islamic party to unite all the forces critical of Islam under his leadership. 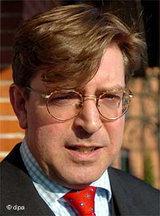 Udo Ulfkotte, author of "The War in Our Cities"

​​Pax Europa wanted to hold a major demonstration in Brussels on September 11th, at which people from all over Europe were to join under the slogan "Stop the Islamisation of Europe."

The mayor of Brussels Freddy Thielemans banned the demonstration, so the organisers planned to hold it in Cologne instead, with the writer Ralph Giordano as the main speaker. But Ulfkotte cancelled the event. Apparently it was because the security of the demonstrators could not be guaranteed – but could it have been because Ulfkotte couldn't find that many prominent supporters?

Although these right-wing populist opponents of Islam deny that they have anything to do with right-wing extremism, their websites include uncensored views which pander to the lowest possible instincts.

The site www.politicallyincorrect.de is run by Stefan Herre, a Catholic primary school teacher from Bergisch-Gladbach near Cologne. The site has had over four million visitors. It includes an internet shop in which you can buy buttons and mugs with the slogan "Islamophobic – and proud of it."

Among the comments posted on the site is this one about a recent scandal concerning spoiled meat which was traded illegally, much of it ending up in Döner Kebabs, the traditional Turkish fast food which is very popular in Germany. Of course the Muslims are to blame: "The incest committed against the German sandwich must be stopped!"

Andreas from Montbard asks in his post: "Can the systematic provision of the population with filth be described as a nutritional jihad?" There is no administrator controlling the posts, which bubble over with hatred of Muslims. "Why shouldn't I hate the Muslims as much as I hate the Nazis?" asks someone going by the name of Capt. "Both are fascist ideologies dressed up as religions."

Among the Christian opponents of Islam is the Evangelical Alliance, which is the umbrella organisation for 1.3 million evangelical Christians in Germany. Ulfkotte writes for their magazine Pro.

The General Secretary of the Evangelical Alliance, Hartmut Steeb, describes Ulfkotte's campaign against the Islamisation of Europe as "an important matter." He adds, "I think that the Islamisation of Germany is possible. For Islam it's just a demographic issue. In principle, Islam seeks domination – I think it's realistic to say that."

Christianity as the only truth

The two large churches are also not totally free of the influence of the evangelicals. New guidelines on the relationship with Muslims issued by the Lutheran-reformed church have been influenced by them. The Islam expert and head of the Evangelical Alliance's Islam Institute, Christine Schirrmacher, was involved in preparing the text on "Clarity and Good Neighbourliness."

Schirrmacher proposes a dissociation from Islam which is controversial at the grass roots. But if you ask her what Islam is, you won't get an answer. On the phone, she avoids the question: "I can't really say," she parries. "But it's not an aggressive position if one says that the Christian faith is the only truth." In accordance with that view, she prepares calendars of prayer which include prayers for Muslims, that they should finally know Jesus.

Sabine Schiffer of the Institute for Media Responsibility in Erlangen says, "Evangelicals use the anti-Islamic movement for their own ends." She's been observing the picture of Islam presented in the media for years. "The arguments used by the Citizens' Movements are filled with fundamentalist Christian content," she explains.

The atmosphere has become more difficult. Ever since Muslims have begun to assert their presence in German society by building mosques, reactions have ranged from irritation to abuse. Critical Islam experts like Ursula Spuler-Stegemann of Marburg are horrified at how the debate about Islam has become so emotional that even the death threats against her colleague Matthias Rohe have become possible.

Spuler-Stegemann is known for her sometimes tough criticism of the Muslim organisations in Germany, but she warns against populist exploitation of people's fears. "It's all right to be critical," she says, "but the way the situation is being ratcheted up is not acceptable."

Islam and Muslims in Germany
The Changing Image of Turks in Germany
An argument over a planned mosque has turned into a fundamental debate about Islam. People have come to be defined by their religion, and every Muslim is an enemy of the constitution. A view of the issues from Sanem Kleff and Eberhard Seidel

END_OF_DOCUMENT_TOKEN_TO_BE_REPLACED
Social media
and networks
Subscribe to our
newsletter