United against a Common Enemy

The "Assises Contre L'Islamisation de L'Europe", a congress against the spread of Islam in Europe recently held in Paris, provided rightwing extremists and opponents of Islam with a welcome forum to issue new tirades of hatred against Muslim immigrants. Bernhard Schmid reports 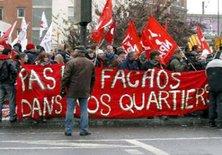 Protests against neo-fascism and Islamophobia: More than 200 people gathered in Paris on 19th December to demonstrate against the anti-Islamisation congress

​​There is nothing better than a common enemy to foment associations between people who would otherwise have little in common. What else would have brought together a feminist, representatives of the Kabyle community – Berber from North Africa who attach great importance to being considered as separate from the Arabs – rightwing soccer hooligans from the club Paris Saint-Germain and a neo-fascist presidential candidate?

A common enemy produces unexpected rapprochement. The finer points are clear-cut: The Muslims are the baddies, there are swarms of them, they are occupying Europe, taking jobs away from indigenous people, they are criminals etc.

It is not every day you see the above-mentioned individuals and groups sitting side by side as they did on this particular Saturday in the 12th district of Paris. Some 1,000 people from half of Europe, as well as guest speakers from Russia and the US attended the "Assises Contre L'Islamisation de L'Europe", a conference that lasted for one day.

Catering for the event – ham sandwiches and red wine – was provided by the extreme rightwing association Solidarité des Français (SDF). This group, part of the neo-fascist organisation Bloc identitaire, has caused a stir in recent years with its campaigns to feed the poor – offering "pork soup" to the homeless in Paris during the winter made it impossible for both Muslims and Jews to partake of the meal. 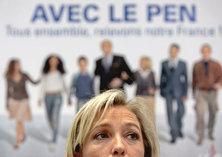 "Muslims as occupiers" – the extreme rightwing politician Marine Le Pen is a political match for her father, the Holocaust denier and leader of the Front National, Jean-Marie Le Pen

​​The Bloc identitaire was represented at the congress by its "presidential candidate" Arnaud Gouillon, and its chairman Fabrice Robert, both of whom delivered speeches at the event.

Another speaker at the conference Anne Zelensky, a former companion of Simone de Beauvoir, attested that there was "nothing shocking" about statements made by extreme rightwing politician Marine Le Pen.

Zelensky was referring to comments made on 10 December by Jean-Marie Le Pen's daughter, a woman who looks set to become the next leader of the Front National (FN), in a speech to around 300 supporters of the party in Lyon. Because the Lyon branch of the FN is viewed as especially extreme, with self-confessed Nazis and anti-Semites among its members, Marine Le Pen had obviously saved up some of her choicest views for this event.

She blustered into the microphone against those who "are continually intent on talking about World War Two" and the occupation of France by Nazi Germany. She pointed out that people should instead be concerned about a "current occupation", an occupation "of parts of our territory" being carried out by Muslims, who are actually or allegedly saying their prayers outdoors on the streets.

This does indeed happen on some streets in the capital's 18th district, partly because the mosques are simply too small to accommodate such concentrated numbers of worshippers. And also partly because an Islamist community in the locality chooses to pray out in the open as a demonstrative statement. These outdoor prayers have been closely followed by racist groups and individuals over the past few months, and details meticulously documented on special websites.

Europe as an "intellectual and spiritual desert"

Marine Le Pen herself did not participate in the congress. In a recent television interview with broadcaster LCI, she said she did not attend due to the demands of the internal party election campaign.

She nevertheless followed proceedings closely, and had words of praise for Oskar Freysinger's "remarkable" speech. Freysinger, a member of parliament representing the Swiss People's Party (SVP), was the most prominent guest at the congress. He initiated the November 2009 referendum on banning the construction of minarets in Switzerland, and another held in November this year pushing for the "expulsion" of foreign criminals and "benefit fraudsters". 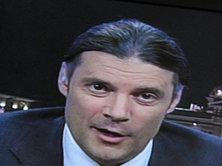 ​​Freysinger made his appearance at the congress around midday, surrounded by an impressive posse of bodyguards. In his speech, he explained that what unites "Islam and Communism" is the fact that they are both "collectivist totalitarian systems". This is why an alliance exists between Muslims and the Left, he said.

According to Freysinger, the main problem is however that Muslim immigrants to Europe encounter an "intellectual and spiritual desert", because "we" are no longer sure of "our own identity".

The name of the absent Marine Le Pen was honoured several times with applause, and not just in response to Anne Zelensky's remarks. Zelensky attempted to justify her sympathy for the extreme right by claiming that the Left had betrayed laicism. Furthermore, she said, the Right has recognised that "not all cultures have the same value", and that western culture is superior because of the status it affords women.

The feminist was the only speaker to be booed by most of the audience when she mentioned the fact that she had participated in a 1970 campaign to legalise abortion.

Many of those present do not take quite such a strict view of laicism, for a good deal of them it could first and foremost provide a convenient pretext to stir up hatred against Muslims in particular and immigrants in general. According to a report in Le Monde, the mayor of the Paris suburb of Montfermeil, Xavier Lemoine, had been billed as a "star guest". Although he is fanatical in his hatred of Islam and a defender of the "Christian Occident", he cannot be described as a proponent of laicism.

The displacement of "white indigenous people"

The rightwing Catholic, a member of the conservative Union for a Popular Movement (UMP), is among other things an opponent of abortion and the political foster son of his predecessor Pierre Bernard, who participated in the funeral ceremony for Paul Touvier, leader of a pro-Nazi militia under the Vichy government, in July 1996.

At no point did Lemoine distance himself from his political mentor. In any case, he did not attend the congress. UMP leaders intervened and banned their deputy from appearing, event organisers complained.

Most of the complaints at the conference were aimed at the "costs of immigration", presented by management consultant and Thatcherite Jean-Paul Gourévitch in columns of figures – immigrants allegedly cost the French 38 billion euros a year, a claim which Gourévitch was of course not able to substantiate.

He was nevertheless rewarded with applause, as was René Stadtkewitz from the party "Die Freiheit" (Freedom), who travelled to Paris from Berlin. He fulminated against the "prescribed cultural decay" and "mainstream politicians" who are only mindful of their own advantage.

There was also applause for a speech delivered by the writer Renaud Camus. In April 2000, one of his books had to be withdrawn by the publishing house Fayard because of its anti-Semitic content.

Camus told the congress that immigrants in France were part of a "grand plan to exchange the population" by political leaders. These leaders, he claimed, are heeding Bertolt Brecht's call – one issued in sarcasm at the time – to "elect a new people".

Incidentally, he said, dealing with criminals with a migrant background is not just a matter of dealing "with crooks, but with soldiers", and the "unbearable insecurity" is a part of a war aimed at the eventual expulsion of "white indigenous people".

Debate on Islam and National Identity in France
Burka not Welcome
The so-called "debate on national identity" launched by the French government is causing feelings among the public to run high. At the centre of the storm lies the controversy of a ban on the burka and relations with Muslims in general. By Bernhard Schmid