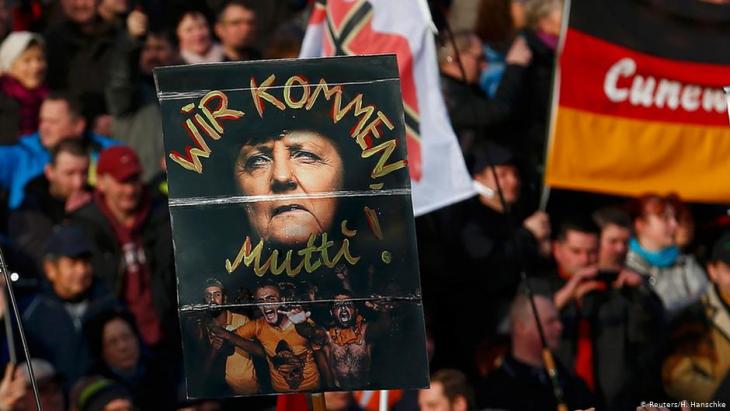 Merkel and "the danger of self-Islamisation"

Anti-Muslim racism means more than just discriminating against Muslims. It is an ideological worldview that pleads for the restructuring of society and more control in the view of the "Islamic threat". Those who do not bow to right-wing demands are deemed guilty of Islamisation. By Ozan Zakariya Keskinkilic

After class, a letter to the editor from a "worried" citizen is waiting for me in my mailbox at the Alice Salomon Hochschule (ASH Berlin). Thomas F.* responds therein to a guest commentary I submitted to the Suddeutsche Zeitung on the occasion of the Day Against Anti-Muslim Racism, which commemorates the murder of Marwa El Sherbini on 1 July 2009 in Dresden.

Thomas F. introduces himself as a long-standing member of the FDP party. He claims to have a cosmopolitan viewpoint. Nothing could justify hatred and violence. And yet, he says, he has reached the limits of his tolerance. He complains that women wearing the hijab have become an everyday sight. And he doesn't have the time to list in his letter all the atrocities committed in the name of Allah. But he does want to paint a picture of what is going on. The handwritten letter is thus accompanied by a drawing showing three people wearing a niqab and burka. The outraged critic of Islam captions the picture with: "I wouldn't have voted for this lady if I had seen her like that – it's Chancellor Merkel."

The caricature of a veiled Chancellor has been circulating on right-wing Internet forums for years. The Islamophobic blog pi-news features an open letter accusing Angela Merkel of deceiving the people. Sharia law has infiltrated Germany's legal system under her rule, it contends. The letter goes on to claim that Merkel wants to Islamise Germany. Here, too, she is shown wearing a headscarf. In the background a crescent moon with a star appears in the night sky above the Bundestag. The place-name sign for Berlin is written in Arabic script.

In its handbook "Der Islam – Fakten und Argumente" (Islam – Facts and Arguments, 2017), the AfD party faction of the state of Thuringia calls this phenomenon "self-Islamisation" and asserts that it is widespread among German politicians. The former Federal Minister of Justice Heiko Maas is another popular target of such accusations. The authors of the publication allege that he visited a Berlin mosque after the terrorist attacks on "Charlie Hebdo" and a kosher supermarket in Paris. The SPD-party politician is seeing to it that "Muslims are staged in the media as victims", they say, and is thus the perfect example of "self-Islamisation". 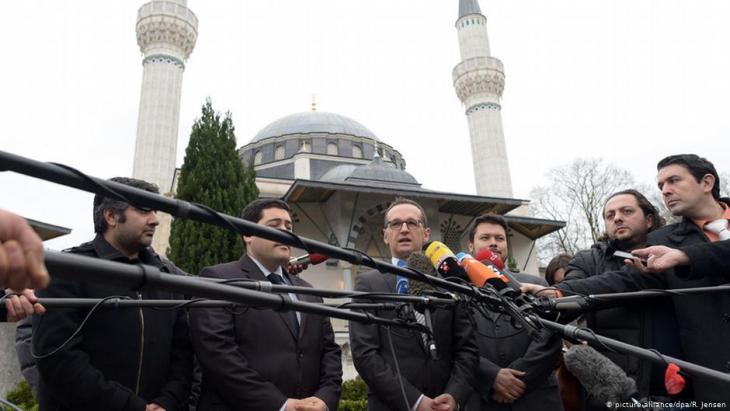 Pilloried by right-wing conspiracy theorists: the authors of an Islamophobic publication produced by the AfD parliamentary group for Thuringia allege that former justice minister Heiko Maas visited a Berlin mosque after the terrorist attacks on "Charlie Hebdo" and a kosher supermarket in Paris. The SPD-party politician is seeing to it that "Muslims are staged in the media as victims", they say, and is thus the perfect example of "self-Islamisation"

The "Islamisation of the Occident" is ostensibly being fostered "by a kind of over-eagerness on the part of non-Muslims, in particular non-Muslim politicians and public figures, to bow to Islamic principles", according to this "Islam fact check". In other words, these so-called self-Islamised Germans are traitors to the people. They are said to be cosying up "to the enemy".

The topos of "self-Islamisation" recalls the historical charge of "racial defilement". It condemns all those who cross "racial" or cultural boundaries, who betray the "master race" or "leading culture" and thus contribute to the destruction of their own "race" or their own people. "Self-Islamisation" is the successor to "kaffirisation". "Kaffir" is a racist slur once used to refer to a black person, so that "kaffirisation" meant in the German colonial discourse an alleged cultural degeneration among white Germans who lived too long among blacks in colonial Africa.

The term laments the supposed rampant impoverishment among these "lost" compatriots, accompanied by excessive alcohol consumption, the infiltration of foreign terms into German and so-called "mixed marriage". The "kaffirised European" is therefore held up as an example of the problem of "intermingling" between seemingly natural opposites. This process would endanger the racist colonial lines of demarcation and must therefore be sanctioned in order to maintain "our" claim to dominance over "the others".

No other Western poet was arguably so well-versed in the Koran or so fascinated by Islam as Germany's national hero, Goethe. In a new publication that examines all Goethe's ... END_OF_DOCUMENT_TOKEN_TO_BE_REPLACED

A deluge of books, movies, series and cover stories: ever since the events of 9/11, the West has seemed almost manically preoccupied with Islam. Yet this has rarely led to deeper ... END_OF_DOCUMENT_TOKEN_TO_BE_REPLACED

Twenty years after 9/11, the world is faced with the dual challenge of Islamophobia and anti-Westernism. Ahmet Kuru argues that Muslims in the West, well versed in both Western ... END_OF_DOCUMENT_TOKEN_TO_BE_REPLACED

Two decades after the attacks of 11 September 2001, the West faces the shattered debris of its failure – not only in Afghanistan, but also in Iraq, Syria, Libya and Yemen. What ... END_OF_DOCUMENT_TOKEN_TO_BE_REPLACED

Twenty years after 9/11, the United States is recalibrating its war policy. However, its assertions that the era of endless wars is over are a myth, writes Maha Hilal END_OF_DOCUMENT_TOKEN_TO_BE_REPLACED

Migrants are often maligned as being responsible for Europe's problems. Yet their integration is in Europe's interest. Michael Thaidigsmann believes that a long-term vision is ... END_OF_DOCUMENT_TOKEN_TO_BE_REPLACED
Author:
Ozan Zakariya Keskinkilic
Date:
Mail:
Send via mail

END_OF_DOCUMENT_TOKEN_TO_BE_REPLACED
Social media
and networks
Subscribe to our
newsletter