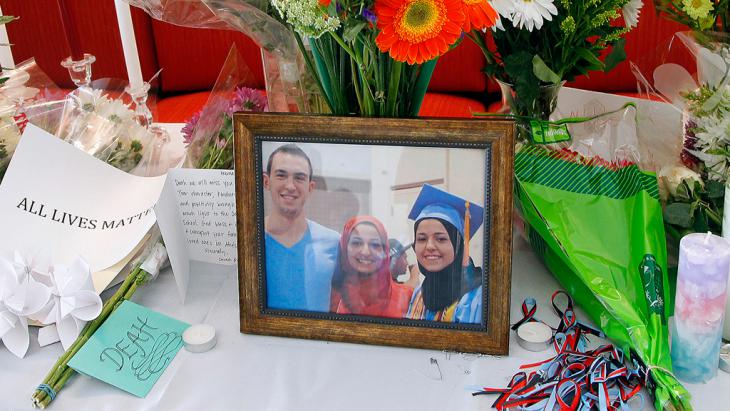 Anti-Muslim sentiment in Canada and the US

North America has seen an alarming number of anti-Muslim attacks in recent months. With elections coming up in both Canada and the US in the next two years, Richard Marcus takes a look at the context of these attacks and the reactions to them

The first few weeks of February 2015 have seen a disturbing number of acts aimed specifically against Muslims in North America. The worst was the shooting dead of three young adults, Deah Barakat, Yusor Abu Salha and Razan Abu Salha, by a white man in Chapel Hill, North Carolina. If this had been an isolated incident, it might have been able to be dismissed as the act of a lone madman, but unfortunately other events both before and after the murders have begun to raise fears that anti-Islam sentiments are on the rise in both the US and Canada.

Islamophobia has gradually become more and more implicit in the statements and actions of individual politicians. While President Obama and – to be fair his predecessor – George W. Bush both stated that their wars were not against Islam but against fanaticism and terrorists, this has not stopped politicians on both sides of the border from either overtly or subliminally playing on people's fears for their personal gains.

With both Canada and the US gearing up for national elections (Canada October 2015 and America November 2016), the rhetoric of fear is already starting to escalate.  An early warning shot of what can be expected was fired off by Texas state legislator Molly White, who posted on her Facebook page a notice that Muslim constituents would be required to take a loyalty oath when attending a scheduled Muslim Day at the State Capitol in Austin if they stopped by her office. Protestors responded to her words and disrupted the event shouting hate slogans. 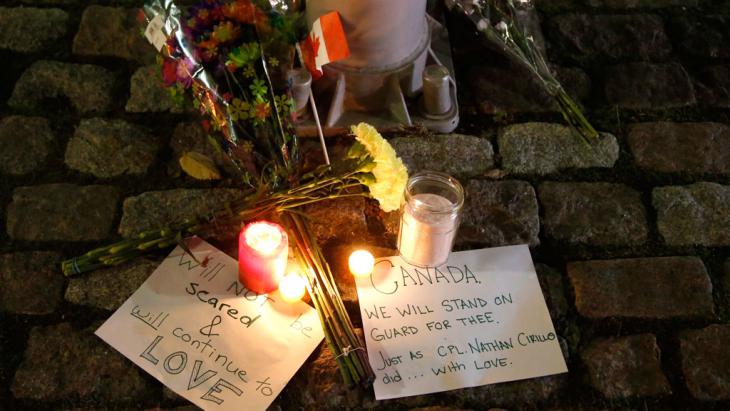 A nation in shock: flowers and candles left by mourners at the National War Memorial in Ottawa, Canada, after a soldier was killed by Michael Zehaf-Bibeau, a Canadian citizen and convert to Islam, on Wednesday, 22 October 2014. Zehaf-Bibeau shot dead one soldier and fired several shots in the Canadian parliament before being shot dead

Canada after the attack on Parliament Hill

In the wake of an attack on Parliament Hill (Home to Canada's House of Commons and Senate) by Michael Zehaf-Bibeau on 22 October 2014, Prime Minister Steven Harper's government has started playing the fear card in order use its majority status to pass a package of new anti-terrorist legislation, Bill C-51, which gives sweeping new powers to the country's intelligence services for the monitoring of Internet and access to previously private information from other government departments. That it has since been shown that Bibeau was mentally ill and a drug addict has been swept under the carpet in the government's haste to make itself seen as Canada's defender against Islamic terrorists.

While the legislation has come under attack from civil rights advocates and mainstream media for its sweeping nature, it was the announcement by Prime Minister Harper that he would appeal the Supreme Court of Canada's decision to allow women to wear the niqab while taking the Canadian Citizenship oath which is even more concerning. The words he chose to make the announcement are chilling as they serve to make Muslims appear different from other Canadians: "I believe, and I think most Canadians believe, that it is offensive that someone would hide their identity at the moment where they are committing to join the Canadian family".

While mainstream Canadian media, for the most part, has done its best not to fan the flames of injustice by printing or broadcasting invective against the Muslim community without putting it into its proper context, the same, unfortunately can't be said for the United States. When it was announced that an Islamic Tribunal was being established in North Texas, right wing media outlets implied it was the first step in a takeover of the American judicial system. Fox News's "Judicial Expert" (former TV judge Andrew Napolitano) went so far as to claim it "would override American law if both parties consented to abide by the decision of the court".

Not only does this ignore the fact that the American constitution forbids any body to supersede its judiciary system, it also fails to mention that other religions in America have the same types of tribunals. The Catholic Church has nearly 200 diocesan tribunals handling a variety of cases, and many Orthodox Jews use rabbinical courts to settle martial and business conflicts with fellow Jews. This is merely a ratcheting up of anti-Islamic sentiment for political reasons by an extreme conservative political lobby. 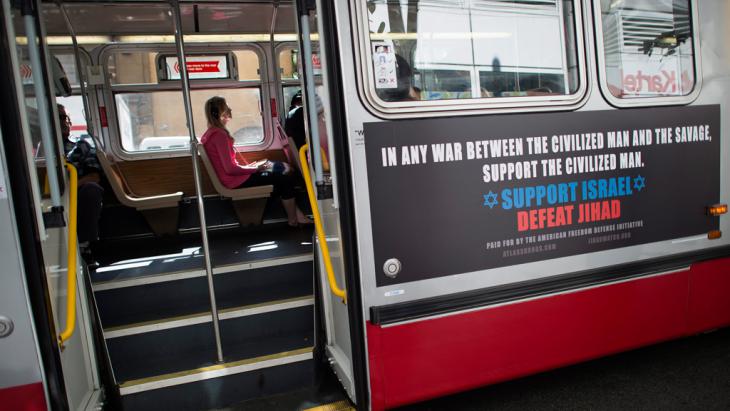 "Playing on people's worst instincts": a San Francisco Municipal Railway bus (Muni) makes a routine passenger stop while displaying a pro-Israel, anti-Islam ad on the side of the bus in downtown San Francisco, 15 August 2012. The ad says "In any war between the civilized man and the savage, support the civilized man. Support Israel. Defeat jihad." The ad was purchased by the American Freedom Defense Initiative run by Pamela Geller. The initiative ran similarly controversial ads on public transport in New York, Washington D.C. and San Francisco

That one of the most strident voices against the courts is Pamela Geller, the woman responsible for the ads on buses whipping up hatred against Muslims by equating them to Adolf Hitler, is no surprise. Geller's organisation, "Stop Islamization of America", paid for ads to appear on the sides of subway cars and buses in New York City, Washington DC and San Francisco. While America's free speech laws make this type of thing legal, that doesn't prevent them from being hateful and playing on people's worse instincts.

Thankfully, amid all the sound and fury, simple acts of decency have gone a long way towards belaying the atmosphere of fear and hatred some are attempting to foster. When a mosque was defaced by graffiti in Cold Lake, Alberta, Canada after the shooting in Ottawa, local, non-Muslim residents showed up of their own volition to clean up the mess and leave signs of support countering the abusive graffiti. In the United States, people are crossing faith and political lines to share sympathy with the families of the murdered young people and condemn the other anti-Muslim acts committed in this past month.

Unfortunately, as elections approach in both Canada and the United States, we can expect fear-based rhetoric from politicians and other sources to increase. With the increased levels of tension this is bound to generate, it increases the likelihood of Muslims in both countries being targeted by those with hate in their hearts. This is a sad state of affairs for two countries who were supposed to be a refuge for those seeking to escape persecution and offering the hope of a better life.

Iranian-Canadian author Ava Farmehri’s debut novel paints a bleak picture of growing up in Iran after the Islamic Revolution. The book is both a prison novel and a reflection on ... END_OF_DOCUMENT_TOKEN_TO_BE_REPLACED

Last week Egypt's police stepped up an "unprecedented escalation" on activists by arresting a leading rights group director. Advocates on the Nile have long weathered a crackdown ... END_OF_DOCUMENT_TOKEN_TO_BE_REPLACED

In France and in Canada's Francophone province of Quebec issues of personal freedom have recently been thrown into sharp relief. In Quebec, legal proceedings have been initiated ... END_OF_DOCUMENT_TOKEN_TO_BE_REPLACED

A friend of the murdered journalist Jamal Khashoggi, Omar Abdulaziz is a thorn in the side of Saudi Arabia. Living in exile in Canada, the activist has been warned by the police ... END_OF_DOCUMENT_TOKEN_TO_BE_REPLACED

In 2017, Sarah Hegazy was arrested in Cairo for displaying a rainbow flag, the symbol for homosexuality and queerness, at a concert. The activist recently took her own life in ... END_OF_DOCUMENT_TOKEN_TO_BE_REPLACED

In June Canada's French-speaking province Quebec passed Bill 21, banning the wearing of religious symbols or garments by certain public servants in the workplace. Aside from the ... END_OF_DOCUMENT_TOKEN_TO_BE_REPLACED
Author:
Richard Marcus
Date:
Mail:
Send via mail

END_OF_DOCUMENT_TOKEN_TO_BE_REPLACED
Social media
and networks
Subscribe to our
newsletter