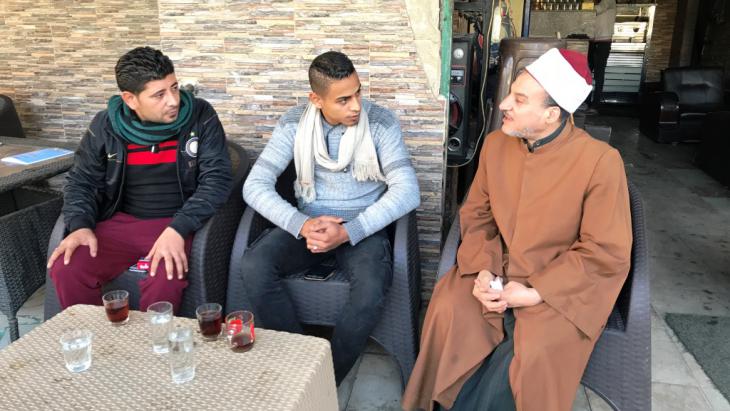 Anti-radicalisation strategies in Egypt
Sheikhs on the beat

There are many opinions about the best way to combat Islamist extremism. For its part, Al-Azhar University in Cairo has decided to send its sheikhs out of the mosques and into the coffee houses of the city in an attempt to prevent radicalisation. By Karim El-Gawhary

Al-Azhar University's mobile anti-radicalisation unit is out and about again: half a dozen legal scholars are working their way along a street in Cairo's Sharabiya Quarter. You can't miss them. Local residents, most of whom work in the nearby workshops belonging to Egyptian Railway, turn in surprise as the sheikhs pass in their dark, floor-length djellabas and the classic red-topped white turban worn by graduates of Al-Azhar.

The sheikhs are looking for a specific coffee house. They are part of the Islamic university's new programme to make contact with people in the places they frequent in their spare time, Al-Azhar's theological outreach unit, so to speak. The new motto of this university, which has been in existence for over a thousand years and views itself as one of the most important legal authorities in Sunni Islam, is "out of the mosques and onto the streets".

When they reach the Sultana coffee house, customers quickly gather around, shake the sheikhs' hands and sit down. In no time, the sound of lively conversations can be heard at several tables. Most of the conversations are about day-to-day problems, questions about relationships or work. Many of them are about economic difficulties: I want to marry, but how can I get a flat in a way that is above board? How can I feed my family without departing from the straight and narrow?

"The idea is to reach everyone and not just those who attend the mosque," says Sheikh Ahmad Nagib, explaining the initiative, which has been running is various areas of the Egyptian capital for several weeks now. "If we come to the people, they feel at home and find it easier to open up to us. This helps us get closer to them and protect them from radical ideas," he adds. 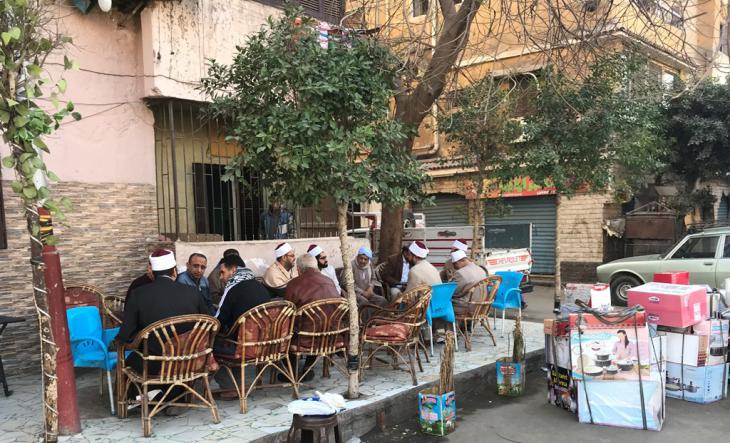 "Theological street workers" in action: Al-Azhar′s anti-radicalisation unit aims to make contact with people in the places they frequent in their spare time, such as this coffee house in Cairo′s Sharabiya quarter. The new motto of the university, which has existed for over a thousand years and views itself as one of the most important legal authorities in Sunni Islam, is "out of the mosques and onto the streets"

With this programme, the sheikhs also want to fight on the front line against radical and militant interpretations of Islam. This front line runs through the city's coffee houses. But is this really the way to win over those who sympathise with terrorist organisations such as Islamic State (IS)?

"We want to eliminate the seed of radicalism in people," says Sheikh Nagib. "If there is no seed that can germinate, there is no radicalism. In the coffee houses, we might come across people who have dormant seeds inside. At any rate, we are not going to find die-hard militants there," he adds.

Some may find it odd that the turbaned Al-Azhar graduates strike up conversations with their compatriots in coffee houses, "but reality is forcing us to take these steps. After all, if we don't reach these people as the institution that is Al-Azhar, others might and may succeed in filling their heads with radical ideas," he says.

Muhammad Ahmad, a young man who regularly visits the coffee house, agrees with him. "It is important that we listen to each other. Many people can neither read nor write; others have been poorly educated. If people get proper religious instruction, they are no longer susceptible to the ideas of IS," he says.

Al-Azhar in the firing line

Al-Azhar launched this initiative after sustained criticism that it was not decisive enough in its opposition to radical Islamist activities. Others felt that some of the university's conservative sheikhs and the scriptures they are teaching are the real problem.

For months now, a debate has been raging in Egypt about the question as to whether Al-Azhar should declare IS terrorists to be unbelievers. The discussion began after a number of deadly attacks on churches and the attack on a mosque in northern Sinai last November in which 311 people were killed. One week after this attack, Ahmad al-Tayeb, the Grand Sheikh of Al-Azhar, demonstratively gave the Friday sermon at the mosque in northern Sinai, condemning the attacks perpetrated by the jihadists. "It is a religious duty to fight these enemies of God and of our Prophet," he told listeners.

"IS is killing Islam"

For many, however, Al-Azhar's regular condemnations of Islamist attacks are just not enough. Speaking to Qantara.de, the Egyptian author and Al-Azhar critic Ahmad Abdu Maher sent a clear message to the sheikhs: "Declare IS and all who belong to it to be unbelievers. After all, they claim to be speaking on behalf of Islam. We have to tell the world that they are not Muslims, that they are unbelievers. We have to defend our Islam," he says, adding that IS is killing Islam. "The jihadists are a catastrophe for our religion. Which is why we have to isolate them; the only way to do that is for us Muslims to declare them to be unbelievers." 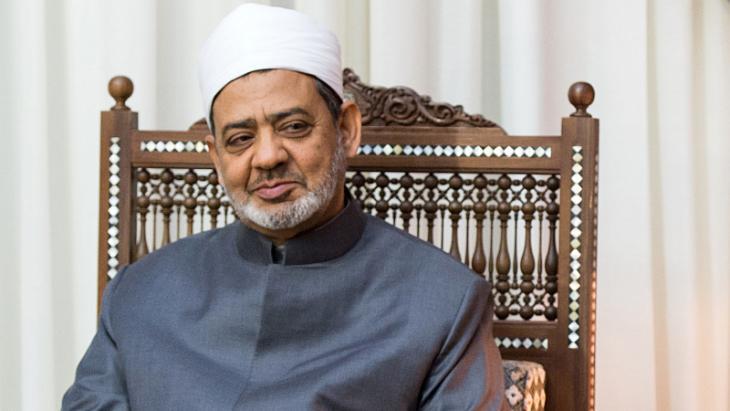 Taking a stand against jihadist terrorism: one week after the deadly attack on a mosque in northern Sinai last November in which 311 people were killed, Ahmad al-Tayeb, the Grand Sheikh of Al-Azhar, demonstratively gave his Friday sermon in the same mosque in northern Sinai, condemning the attacks perpetrated by the jihadists. "It is a religious duty to fight these enemies of God and of our Prophet," he told listeners

Muhammad Abdel Fadil is head of a department at Al-Azhar that monitors the Internet debates of radical Islamists and tries to come up with theological counterarguments. Speaking to Qantara.de, the young sheikh, who gained his doctorate in Islamic Studies at the University of Munster, defends Al-Azhar's position. "With every attack, the pressure on Al-Azhar to declare terrorist groups to be unbelievers grows. So far, Al-Azhar has declined to do so," he says. "But it does distance itself from these terrorist groups and says that they have moved away from Islamic principles and the spirit of Islam."

According to Fadil, Al-Azhar has stressed on numerous occasions that war against IS is necessary because the jihadists are killing innocent civilians. However, he argues, the decision as to who is a believer and who is an unbeliever is a matter for God alone, not for humans. In his view, the designation "unbeliever" is a theological one that has nothing to do with the fight against terrorism. "In Islam, you can fight other people even if they are Muslims and treat other people well even if they are not Muslim," he says. This is why Al-Azhar condemns the terrorist attacks as being un-Islamic acts, but does not declare the perpetrators unbelievers, he explains.

Al-Azhar critic Ahmad Abdu Maher rejects this differentiation between the perpetrator and the act. "To be an unbeliever is an act that requires a perpetrator. Anyone who does the deeds of an unbeliever is an unbeliever," he says. To be consistent, those who claim to speak on behalf of the community must be excluded from that community, he maintains. "As long as someone speaks on behalf of Islam but acts in an un-Islamic way, it is my right to say that they have rejected Islam. In my view, IS jihadists are unbelievers specifically because they take it upon themselves to speak on behalf of my religion," says Ahmad Abdu Maher. 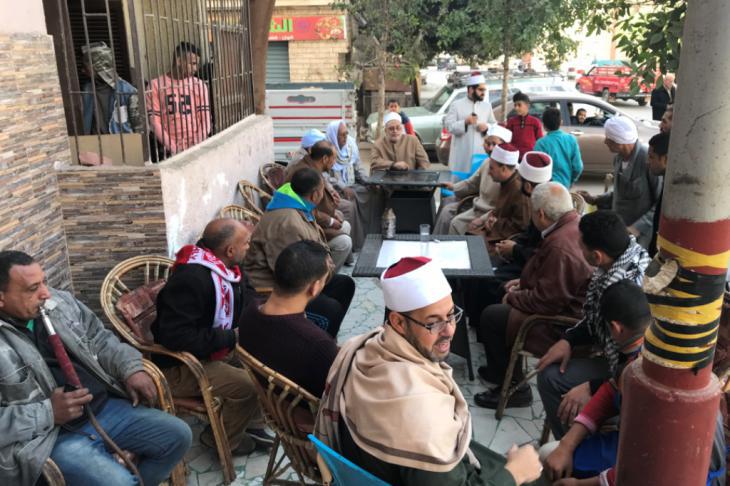 Open to dialogue with Sharabiya residents: when they reach the Sultana coffee house, customers quickly gather around, shake the sheikhs' hands and sit down. In no time, the sound of lively conversations can be heard at several tables. Most of the conversations are about day-to-day problems, questions about relationships or work. Many of them are about economic difficulties: I want to marry, but how can I get a flat in a way that is above board? How can I feed my family without departing from the straight and narrow?

Closing the door to extremism

But this is a discussion Al-Azhar does not want to get involved in. "We criticise the terrorists because they declare all kinds of people to be unbelievers at will. We don't want to sink to the same level," says Sheikh Abdel Fadil. This is an important objection. After all, so-called "Islamic State" not only declares Christians to be unbelievers, but all Muslims who do not adhere to its radical interpretation of Islam. "The extremists have opened these doors; we want to keep them locked from now on," says the Al-Azhar scholar.

Another question is where to draw the line when it comes to declaring other people unbelievers. This may be relatively clear in the case of IS. But it must be said that some Arab regimes use of the term terrorism all too readily. "There is the risk that we will ultimately end up in a situation where anyone who thinks differently will be declared a terrorist and therefore an unbeliever," fears Abdel Fadil.

He says that instead of bandying terms such as "apostasy" and "lack of faith" around, Al-Azhar – where he himself works – should change the way it deals with Islamic sources. Much of what militant Islamists are now using to back up their arguments was only significant in a very specific historical context, he says. He feels that more work must be done to adapt the interpretation of Islamic sources to the modern day. But that is another, much more far-reaching discussion.

People in Arab countries have been talking more openly about sex and sexuality for some time now, especially on social media. And for the first time ever, they have the vocabulary ... END_OF_DOCUMENT_TOKEN_TO_BE_REPLACED

Alaa Abd el-Fattah, arguably Egypt’s most prominent democracy activist, has just been handed another lengthy prison sentence. Despite this, a book of his writing has recently been ... END_OF_DOCUMENT_TOKEN_TO_BE_REPLACED

A prominent rights group in Egypt, the Arabic Network for Human Rights, is ending operations just as the country braces for a controversial NGO law. Is this the beginning of the ... END_OF_DOCUMENT_TOKEN_TO_BE_REPLACED

Moncef Marzouki was Tunisia's first democratically elected president after the fall of dictator Ben Ali. Today he is the most prominent critic of increasingly counter- ... END_OF_DOCUMENT_TOKEN_TO_BE_REPLACED

Asef Bayat, professor of Sociology at the University of Illinois, Urbana-Champaign, has been studying revolutions and how they affect people since 1979. In his recent book, " ... END_OF_DOCUMENT_TOKEN_TO_BE_REPLACED

Every year in December, the team at Qantara.de takes a look back at the articles that proved most popular with our readers. This year is no different. Here is a run-down of the ... END_OF_DOCUMENT_TOKEN_TO_BE_REPLACED
Author:
Karim El-Gawhary
Date:
Mail:
Send via mail

END_OF_DOCUMENT_TOKEN_TO_BE_REPLACED
Social media
and networks
Subscribe to our
newsletter