Skip to main content
Anti-Semitism in the Middle East

Not All Palestinians Were Pro-Nazi, Says German Historian

Historians have typically characterized Palestinians collectively as Hitler-supporters during the Nazi regime. But German researcher René Wildangel objects that they were more concerned with relations with an other European country. Sarah Mersch reports 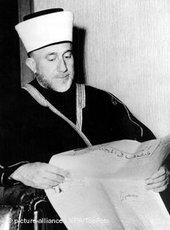 Grand Mufti Amin al-Husseini - Palestine's most notorious anti-Semite - was not representative of his countrymen during that time, says German historian René Wildangel

​​Any historical conversation in Germany over Palestine and National Socialism usually turns to one name: Grand Mufti Hajj Amin al Husseini. The Muslim leader was an anti-Semite, a passionate follower of the Nazis and moved to Germany in 1941 to collaborate with Hitler's regime.

However, in a recently published study, Berlin-based historian René Wildangel has claimed Husseini "was simply not representative" of his countrymen during that time.

"It's not a question of whether he was an anti-Semite or a collaborator - that's relatively clear," said Wildangel. "We have to consider the things that were happening in Palestine and not just this one person."

Much of the research conducted on relations between Arab nations and the Nazi regime, including a 2006 book by Klaus-Michael Mallmann and Martin Cüppers titled "The Crescent and the Swastika: The Third Reich, the Arabs, and Palestine" (Halbmond und Hakenkreuz. Das Dritte Reich, die Araber und Palästina), has reached the conclusion that only Germany's defeat in northern Africa prevented "German-Arab mass crime" against Jews.

Most of the historical research on the topic is based on German, British and Israeli sources and neglects the Palestinian perspective, which is why it has been taken for granted that the Palestinians took the same pro-Hitler stance as their leader, said Wildangel.

By examining how Nazi Germany was portrayed in Palestinian newspapers and publications in the 1930s and 1940s, Wildangel found a fascination about Adolf Hitler among Palestinians.

But the Nazis' positive reception had less to do with a general anti-Semitic sentiment, concluded Wildangel, and more to do with opposition to British colonial rule, which would last until 1948. Nazi Germany was, after all, Britain's enemy in the war.

Nazis were enemy of the enemy

​​The Palestinians who read newspapers were presented with arguments for and against Nazi Germany and well informed about the true aims of the Nazi regime - and also that Hitler's racism extended well beyond the Jews.

"They, in part, embraced anti-Semitism and racism, but did not share the in eliminatory character of the Nazi regime," Wildangel said of Arab nationalists, adding that Husayni's ideological and political views frequently met with explicit opposition in the Palestinian population.

The tendency to represent Palestinians as collective adherents of the Nazis primarily has to do with the ongoing Israeli-Palestinian conflict that heated up after 1945, said Wildangel.

"The more intense the hate becomes in the Middle East conflict, the more likely people are to convey this view of history," he said. "The Israeli authors make reference to the mufti and the Arabs refuse to deal with anti-Semitism and the Holocaust at all."

Wildangel said he believes that shifting the blame and not dealing with the other side's past only intensify the crisis. His latest book, available in German ("Zwischen Achse und Mandatsmacht"), is at least one effort to spur a two-sided discussion.

National Socialism
Are Arabs Turning a Blind Eye to History?
A recently published study conducted by the Centre for Modern Oriental Studies in Berlin illustrates the complexity of the relations between Arabs and National Socialism. Lennart Lehmann read the study for Qantara.de

END_OF_DOCUMENT_TOKEN_TO_BE_REPLACED
Social media
and networks
Subscribe to our
newsletter