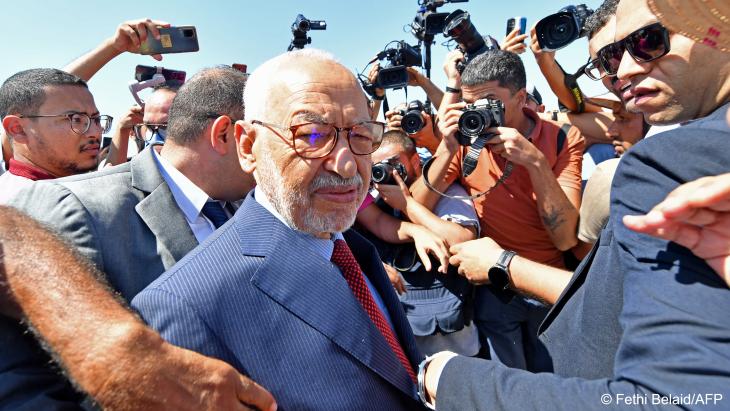 The leader of Tunisia's Islamist-inspired opposition party Ennadha is set to be questioned on Tuesday by an anti-terrorism unit, his lawyer said, after another senior party member faced hours of interrogation.

Ennadha categorically denies the claims that its leader, Rachid Ghannouchi, and Tunisia's former prime minister Ali Laarayedh were involved in sending jihadist militants to Syria and Iraq. The accusations have resurfaced after President Kais Saied tightened his grip on the judiciary, following the suspension of the Ennadha-dominated parliament last year.

Ghannouchi had arrived at the headquarters of the anti-terrorism centre on Monday afternoon for questioning, according to an agency reporter in the capital Tunis, several hours after his deputy Laarayedh. "After more than 12 hours of waiting, Mr Ghannouchi wasn't heard by this unit which decided to delay the interrogation until mid-day Tuesday," said his lawyer Samir Dilou.

Laarayedh was questioned "for hours" and is still being held by the unit, said Dilou and an agency reporter at the scene. In a statement released overnight, Ennahdha denounced the interrogation as "a flagrant violation of human rights".

Critics of the party and some politicians accuse Ennadha of having facilitated the departure of militants for war zones. After the 2011 overthrow of dictator Zine El Abidine Ben Ali, thousands of Tunisians joined the ranks of jihadist organisations – most notably the Islamic State group in Syria and Iraq, but also in neighbouring Libya.

Ennadha played a central role in Tunisia's post-Ben Ali democratic politics until Saied began his power grab in July last year, followed by a controversial referendum which granted unchecked powers to his office. Ennadha had on Sunday decried attempts "to use the judiciary to tarnish the opposition's image" and implicate its leaders in "fabricated affairs".

The probe against Ghannouchi and Laarayedh was meant to "distract the public" from dealing with economic and social issues and the "worsening conditions" in the country, the party said in a statement.

In July, the same anti-terrorism unit questioned Ghannouchi, 81, in a probe into allegations of corruption and money laundering linked to transfers from abroad to the charity Namaa Tunisia, affiliated with Ennadha.    (AFP)

More on this topic
Kais Saied's creeping coup: Who will save Tunisia's democracy now?Referendum on a new constitution for Tunisia: Rolling back the achievements of the revolutionConstitutional referendum in Tunisia: What next for the birthplace of the Arab Spring?
Home
Print
Newsletter
MoreAll Topics

END_OF_DOCUMENT_TOKEN_TO_BE_REPLACED
Social media
and networks
Subscribe to our
newsletter