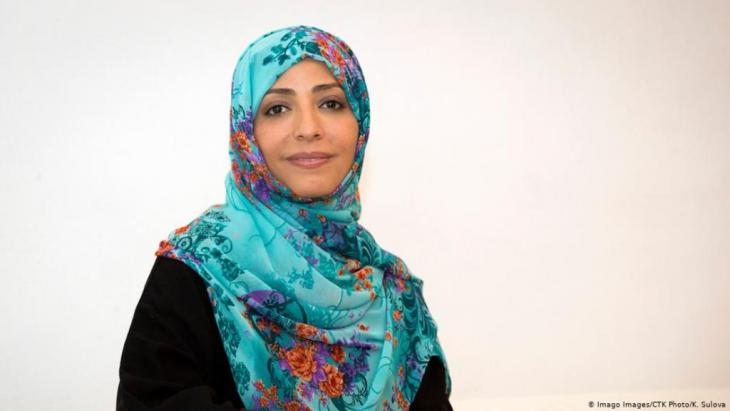 Nobel Peace Prize laureate Tawakkol Karman says the time has come to pressure Saudi Arabia and the UAE to withdraw from Yemen so that the country can resume the peace process and restore a Yemeni state. Interview by Rafiah Al Talei

What role do you expect the Biden administration to play in ending the war in Yemen?

Tawakkol Karman: On a personal level, I am optimistic that Joe Biden is prepared to work politically and diplomatically to put an end to the suffering of Yemenis caused by this war and to help them find a solution. Ideally, this would prepare the country to complete a political transition process. The Trump administration blindly supported the UAE and Saudi Arabia. It is also possible that the new administration may reactivate the role of the UN to defend a serious and tangible solution to ending the war. I see a U.S.-led international mobilisation to pressure the warlords, their Saudi and Emirati leaders in the coalition, as well as the Houthi militias in Sanaa to reach a solution – this is key to ending the war in Yemen.

Everyone knows what ambitions Saudi Arabi and the UAE harbour in Yemen: a continuation of the war, so that the coalition can – through blockade, destruction, and tutelage – remain in control in the situation. This, in and of itself, strengthens the Houthis' position, thanks to public and clandestine support from Iran. Saudi Arabia and Iran are controlling the war in Yemen to the extent that it aligns with their interests. These interests clearly do not include a limit to Yemen’s suffering, or any consideration for Yemenis who might one day want to return home.

With regard to destructive Saudi and Emirati policies, the coalition is overseeing another coup in Aden and in several other governorates, which it claims to have liberated from Houthi control. These areas have been handed over to coalition-aligned militias, whose violence the coalition has legitimised in the process.

The Yemen I know and love

The Saudi-led coalition has prevented the president and the internationally recognised government from carrying out their objectives inside Yemen, while pursuing its own coalition agenda of annexing the island of Socotra, controlling Balhaf gas and oil facilities, and establishing a new militia on the western coast and in Al-Mukha.

The grim reality of the coalition’s role illustrates that international pressure is the main route to ending the war in Yemen and allowing the Yemenis to rebuild their country. Rebuilding the Yemeni state and restarting the political process can only happen if the international community exerts pressure on Saudi Arabia and the UAE to withdraw and lift the blockade. I think the new U.S. administration has a real opportunity and there is hope in Yemen that it will adopt this role. We need true support from the international community to stop this suffering.

Do you imagine the post-war era to be based on the principles and aspirations of the 2011 revolution?

Karman: The transfer of power agreement that was presented during the “Gulf Initiative” and the outcome of a national dialogue were both results of the 2011 popular revolution. They are the two primary sources for a guiding process to reinstate a legitimate state. Moreover, the outcome of the Houthi coup was rejected by UN security council decisions, with the latter intended to guarantee international respect for Yemen’s security, stability, and unity.

This war was aimed at dividing Yemen, reverting us to an imamate and the continuation of an occupation by the Houthis and Saudi hegemony – something our people rejected. The end of the war for us means the return of Yemen and a unified federal Yemeni state. Just as we reject war, we refuse to accept a phony peace that legitimises Saudi and Emirati hegemony or a Houthi coup. Neither option represents peace, but rather a continuation of war.

The counter-revolutionaries, operating alongside Iran, Saudi Arabia, and the UAE, oppose the same ideals. Once this Saudi war against our people is over, the road map will – as agreed – be the complete transfer of power, a referendum on a new constitution, and the implementation of elections.

What future role do you think political parties currently involved in the conflict (be they the Houthis, the Reform Party, the Popular Council Party) will have? Can these parties move from division to unity?

Karman: Firstly, the war began because the Houthi coup caused the collapse of the government, its parties, and its control over Yemen. Today we have Houthi militias in Sanaa and transitional militias supported by the coalition in Aden. It falls upon them to lay down their weapons and join the rest of the protagonists and political parties to conclude a national dialogue and finalise a road map for political settlement and an end to the war.

The war has failed. These militias have brought the people nothing but death, hunger, displacement, and division. They have transformed our cities into segregated spaces, prisons of degradation, oppression, and looting. The time has come to put weapons aside and to lobby in the interest of Yemen and the Yemeni people – and reject external tutelage from Riyadh and Tehran.

How do you see the future of Southern Yemen; do think independence is a viable option?

Karman: Several militias exist that are aligned with the transitional council. Established and supported by the UAE, with the help of Saudi Arabia, these militias are part of the same separatist movement that was active before the 2011 popular revolution. They do not have what could be practically described as a presence in the southern governorates today.

Ten years ago, in February 2011, Yemenis took to the streets for freedom and the rule of law. But instead, the uprising turned into a war that has lasted for years. Impressions from a torn country. By Kersten Knipp 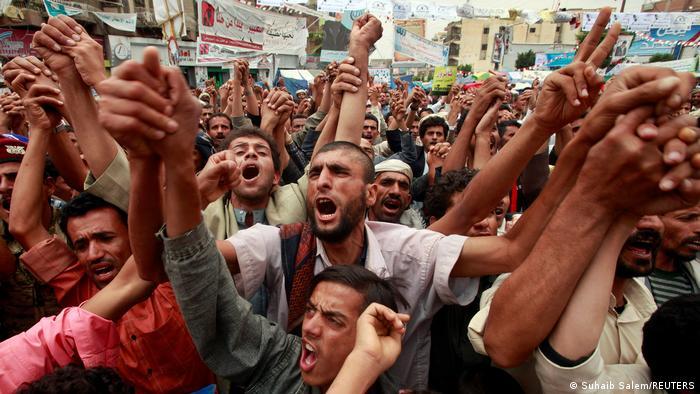 Anger and hope: ten years ago, as of February 2011, Yemenis took to the streets to protest against the repressive regime of President Ali Abdullah Saleh. A year after the protests, in January 2012, he resigned. But the renunciation of his mandate did not bring peace to the country – the internal tensions and rivalries were too great and led to new violence in the same year 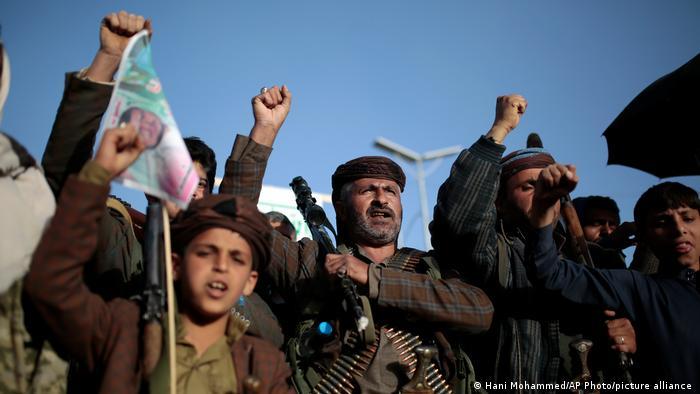 Rebellion in the north: in 2012, the Houthis living in the north of the country rose up. While they initially advocated greater autonomy, they made more and more claims to power over the course of the war. The Iranian-backed Houthis are accused of serious human rights violations. In the picture, sympathisers demonstrate against the USA, which declared the Houthis a terrorist organisation earlier this year 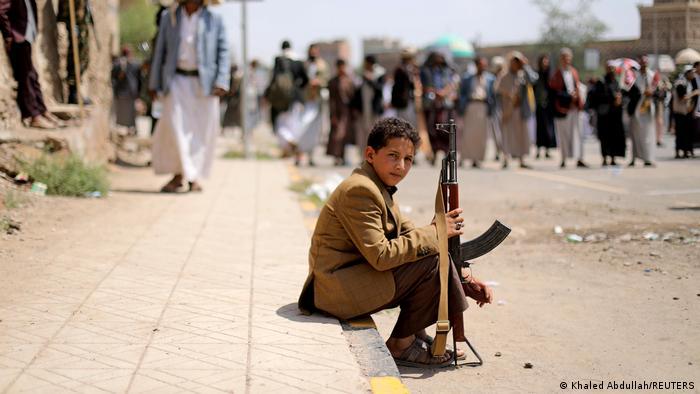 Childhood under fire: even the youngest suffer under the war. Many children have become orphans, others forced to serve in the armed forces, especially on the side of the Houthis. Military service has taken the place of school. Young people are being deprived of their opportunities, creating a lost generation 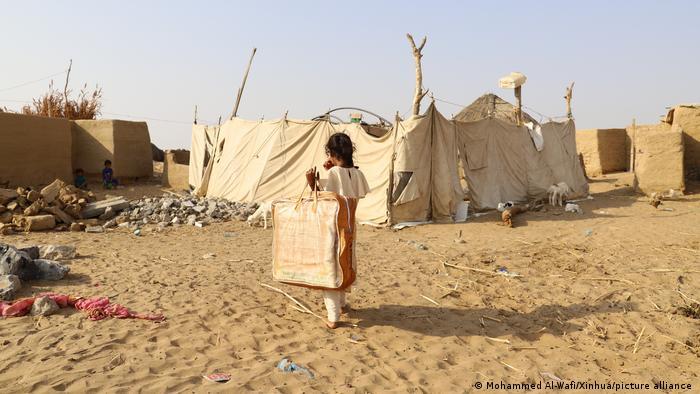 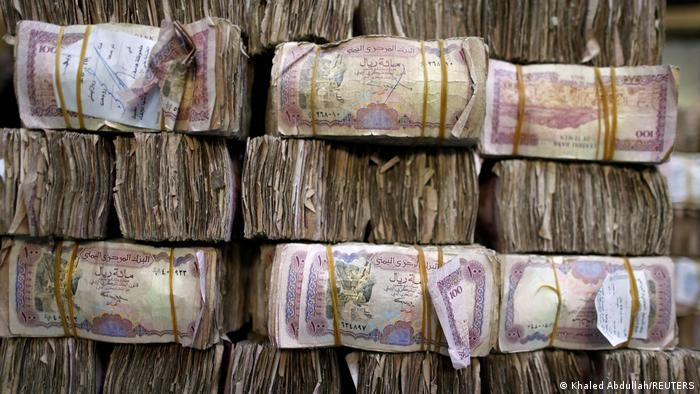 Inflation: the war is also affecting the Yemeni currency, the rial. While one U.S. dollar cost 215 rial in 2014, five years later it was 570 rial. For many Yemenis, already impoverished by the war, even basic foodstuffs have become unaffordable. The Yemeni postal service paid its employees with these bundles of money in January 2017 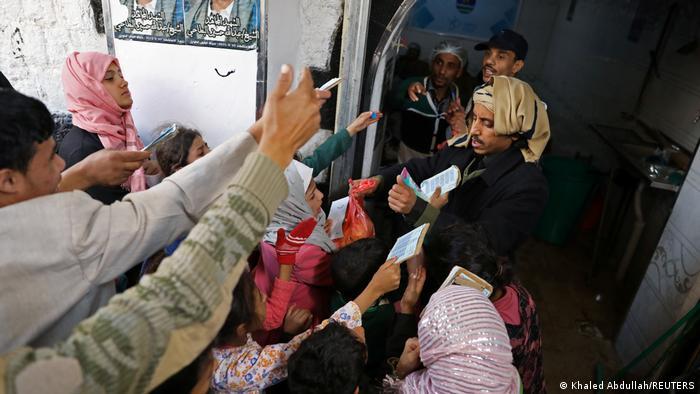 Hunger: the war has turned many people into aid recipients. The country's borders, including those to the sea, are often impassable because they are controlled by rebels and militias. This makes it increasingly difficult for aid organisations to provide the people themselves with the most basic necessities. Here in the picture, aid workers distribute food vouchers to those in need 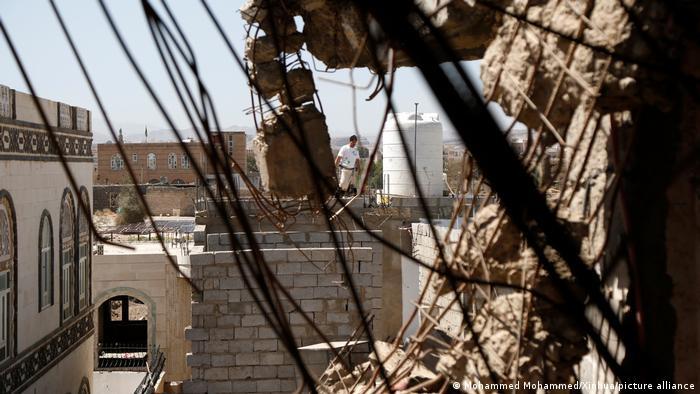 Battered city of Sanaa: the Yemeni capital has also been severely damaged over the course of the war. In 2015, it was the target of massive airstrikes by the Saudi Arabia-led international coalition fighting on the side of the Yemeni government. It also flew attacks against the insurgent Houthis in Sanaa. For their part, the Houthis have also carried out heavy attacks on the city and its inhabitants 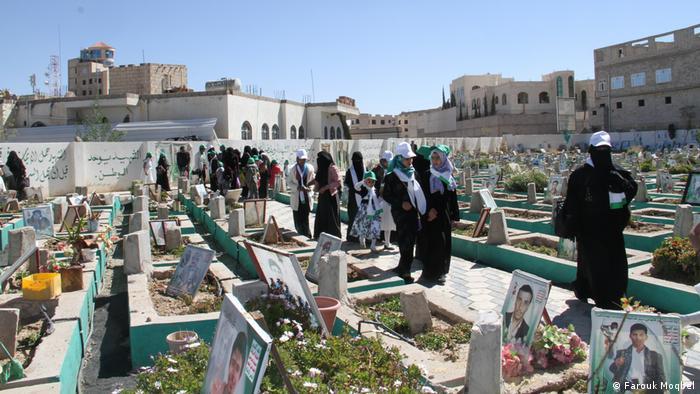 Mourning for the dead: the war has cost many lives. According to United Nations estimates, more than 230,000 people have died so far, more than half of them civilians who died while fleeing, through poverty or malnutrition. Several thousand innocent people have died as a result of armed violence, including around a thousand children 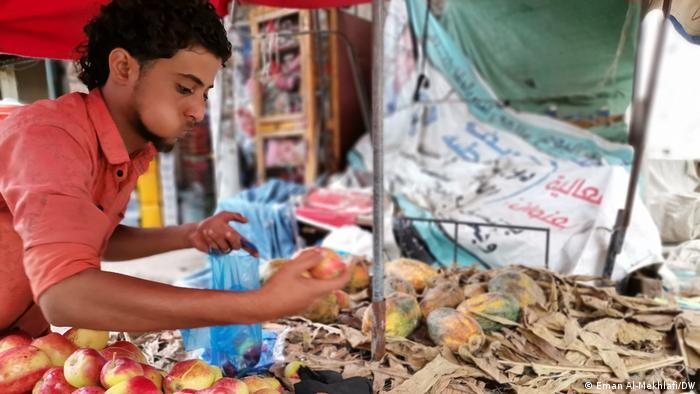 Market and trade: in some regions, agriculture is still possible despite all the violence. This trader at the market of Taiz in the south-west of the country sells what the traders deliver to him. He himself consumes what is perhaps the country's most characteristic agricultural product: Kat, a herb that is chewed to produce a mildly intoxicating effect 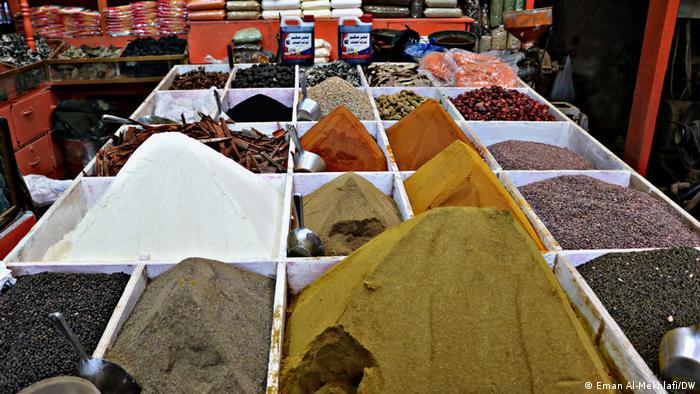 A blaze of colour: for centuries, Yemen was a central station in the spice trade between India and the Arab world. Although it lost this position with the discovery of the sea route to India, the legacy of this "spice route" is still present in Yemeni cuisine today. It adorns a trader's stall at the Taiz market in December 2020 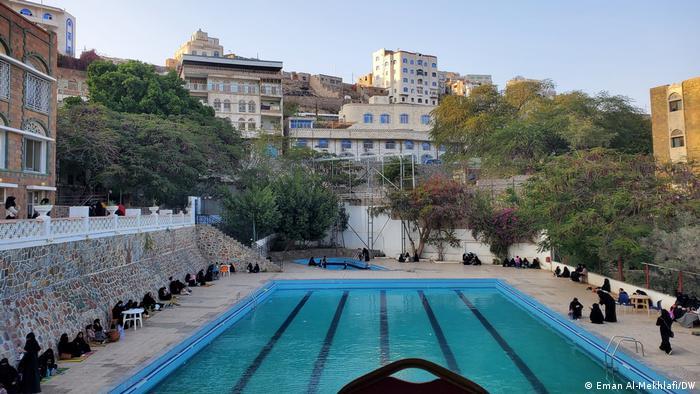 Water and hope: not everything has been destroyed by the war. In Taiz, this public swimming pool has been preserved and still serves as a meeting place. It is quite conceivable that it also has a symbolic function, reminding visitors that there is something else besides war – that life still offers some small pleasures, despite the violence

Most people in the south reject these militias. They are not accepted in Hadar Al-Mot, Shabwa, Abeen, Al-Mahra, or Socotra. In the governorates of Aden, Lahaj, and Al-Dalia, they experienced widespread rejection after their slogans lost meaning. Let us not forget, the people there had a chance to test their trustworthiness and governing style during the years they ruled those three governorates.

These militias also acted to trigger a new conflict with legitimate forces in the two southern governorates of Shabwa and Abeen. Requiring the intervention of hundreds of Emirati tanks and an Emirati plane, which shelled the Yemeni forces of mostly southern fighters on the outskirts of Aden and put down the popular uprising there, this conflict thus cemented the transitional militia's control. It also triggered painful memories of the southern separation and the war of 1986.

Most southern governorates support a united Yemen that does not rely on the kind of violent subjugation that occurred under the Saleh regime. Most southerners want a Yemeni state that fulfils their hopes of peace, stability, equality, and economic opportunity, rather than transitional militias who are against them and the concept of a legitimate Yemeni government.

How is one to convey the history of Islamic images of Muhammad freed from today’s polarised politics? What are the challenges and pinch points of this particular academic ... END_OF_DOCUMENT_TOKEN_TO_BE_REPLACED

The devaluation of the Egyptian pound combined with rising food prices is taking its toll on Egypt. More and more people are slipping into poverty. Karim El-Gawhary reports from ... END_OF_DOCUMENT_TOKEN_TO_BE_REPLACED

Chinese President Xi Jinping's visit to Saudi Arabia in December 2022 may have rattled Washington, but it simply highlighted the Arabs’ desire to diversify their foreign relations ... END_OF_DOCUMENT_TOKEN_TO_BE_REPLACED

Lebanon was long viewed as the Switzerland of the Middle East. Until relatively recently, billions were deposited in its banks. Gulf states were among the foremost investors in ... END_OF_DOCUMENT_TOKEN_TO_BE_REPLACED

Protests by Western activists at the FIFA World Cup may have backfired and sparked a backlash against gay, lesbian and queer communities in Qatar, critics say. By Cathrin Schaer END_OF_DOCUMENT_TOKEN_TO_BE_REPLACED

According to a recent survey, half of all Iranians say that they have left Islam as a religion, while two-thirds believe Islamic law should be excluded from their legal system. In ... END_OF_DOCUMENT_TOKEN_TO_BE_REPLACED
Author:
Rafiah Al Talei
Date:
Mail:
Send via mail

END_OF_DOCUMENT_TOKEN_TO_BE_REPLACED
Social media
and networks
Subscribe to our
newsletter