Everyone must have seen them somewhere: highly atmospheric photos of the Bosporus bearing the unmistakable signature of the legendary Magnum photographer Ara Güler. A new book now presents half a century of Istanbul's history through his lens. Nimet Seker on a remarkable coffee table book 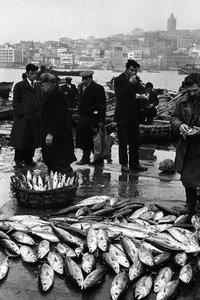 Fishermen in the Eminönü district (1958): Ara Güler portrayed the lives of the poor and destitute; trouble and strife, poverty, unemployment, decay, but also hard work and hope are tangible in his work

​​ Two workers are dangling from the high tower of a minaret on ropes. Further down but still at a dizzying height, another worker balances on wooden scaffolding. Behind them a breathtaking panoramic view of the Galata Bridge: tiny people and cars, an old tram, toy-sized Bosporus ferries on the waves and the hills of Istanbul, covered in houses, ranging behind Karaköy.

The Turkish photographer Ara Güler captured this scene in 1957. The picture is just a small fraction of his extraordinary life's work, which he calls by the unpretentious and unadorned name of "the archive". A sign of how Ara Güler sees his work: as documentary, journalistic photography. Yet for his audience, every single photo appears to be a carefully composed work of art.

Güler came to fame with his monumental black and white photos of Istanbul, which have now been assembled in a book. The pictures capture Istanbul from the 1940s to the 1980s, a time of great change in the city.

"The archive" in Galata

Ara Güler has accumulated a photographic oeuvre gigantic in scale and highly interesting from a historical point of view. His work is important, for example, for writers looking for remainders of the old Istanbul, a place if not yet disappeared then surely fast crumbling and decaying. Perfect for those whose memories of the Istanbul of their youth are too faded to put the details down on paper. In Ara Güler's pictures, they can recall those irretrievably lost days; more, in fact: they can see the major changes and fractures and the sense of a new era dawning with all their details in photographic documents. 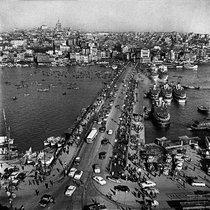 Ara Güler photographed the city from all possible positions and directions: view of the Galata Bridge (1965)

​​ One of the writers to use the "archive" in Galata was Nobel laureate Orhan Pamuk. He was apparently overwhelmed by the wealth of material.

Ara Güler photographed the city from all possible positions and directions, omitting not one important place. Above all, however, he did not omit its people. Ara Güler's Istanbul is inconceivable without its people, with all their joy and pain.

Unlike the typical tourist, Güler was not interested in empty landmarks. He portrayed the lives of the poor and destitute; trouble and strife, poverty, unemployment, decay, but also hard work and hope are tangible in his work. Yet all this is packaged in such a poetic and melancholy framework that these pictures are far more than just documentary photography. They are the human legacy of the inhabitants of Istanbul.

The Bosporus glitters picturesque and atmospheric, dotted with ferries, clouds of smoke and leaden fog hanging over the water. Porters and street traders traipse across the cobbles. The people live and work in ruins, crumbling houses, run-down, muddy streets. Heavily laden carts share the roads with American automobiles. Old men drinking or sitting bored in cafés. Children playing marbles outside a Byzantine church. 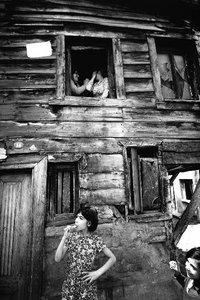 "Poetic and melancholy framework": Ara Güler's photographs are the human legacy of the inhabitants of Istanbul

​​ Elsewhere, men in ragged clothing, waiting for someone to give them work. The bare battle for survival is inscribed on his subjects' faces. Yet alongside all the misery are clear signs of industrialisation and urban comfort: cars, trams, factories, tower blocks. A perfectly normal big city.

Then suddenly, devout Muslim women by the delicately ornamented shrines in Eyüp or sitting outside mosques decorated with precious Ottoman tiles. Many of the pictures might have been taken today. And yet, it is hard for anyone looking down from the hills of Eyüp towards the Golden Horn to imagine that this place once looked very different. Ara Güler photographed the landscape around Eyüp in 1975, then bare in comparison to today.

Pomp and decay, luxury and poverty are at very close quarters in these pictures. Set before an imposing cityscape dominated by mighty minarets and domes, the people in Güler's photos appear particularly fragile. They are people who touch the audience's emotions.

Orhan Pamuk calls Güler's work the "visual memory of half a century of urban history". The legendary photographer Ara Güler is not called "the eye of Istanbul" for nothing.

END_OF_DOCUMENT_TOKEN_TO_BE_REPLACED
Social media
and networks
Subscribe to our
newsletter