Seven films dealing with the theme of "Arab women" were shown at the Arab Film Festival in Tübingen, Germany. At the center of the festival was the advance showing of the Lebanese film Caramel by Nadine Labaki. Florian Wagner reports

Seven films dealing with the theme of "Arab women" were shown at the Arab Film Festival in Tübingen, Germany. At the center of the festival was the advance showing of the Lebanese film Caramel by Nadine Labaki. Florian Wagner reports

Whenever the designation "Arab women" is mentioned in Europe, then stereotypical reactions inevitably arise. Assertions are made about the oppression and the lack of rights of "Arab women" in general, the inflated debate about honor killings is revived, or discussions revolve around the gruesome practice of female circumcision.

An image of hopelessness is portrayed in the media and any search of bookstore shelves devoted to the Arab world usually reveals not much more than the personal stories of oppressed women, who only narrowly escaped the violence of male dominated family clans.

This is certainly not the complete picture of the lives Arab women, as has been powerfully demonstrated by the Arab Film Festival in Tübingen, southern Germany. This year, organizers screened seven films on the theme of "Arab women."

These films did not just feature women in front of the camera, but also, and in particular, women behind the camera. What emerged was a colorful and sophisticated representation of the lives of Arab women who realize their dreams and assert themselves in life. The program provided a stark contrast to the same old story of oppression.

"We wanted to offer the public the opportunity of seeing a more differentiated image of the situation of women in Arab society," explained Adwan Taleb, head of the festival.

"In addition, we wanted to show women who live beyond all the clichés, women who have fought for their freedom and emancipation, who are politically active, and enjoy the opportunity of freely expressing themselves in their own culture and society."

On the path to free expression within one's own culture: Jocelyne Saab's "Dunia" was one of the featured films at the festival

​​No one better represents traveling on the path to free expression within one's own culture than the literature student Dunia, the main figure in the film of the same name by the Lebanese filmmaker and screenwriter Jocelyne Saab.

Dunia wants to follow in the footsteps of her mother and become an oriental dancer. With the help of the charismatic Professor Bashir, played by the well-known Egyptian singer Mohamed Mounir, she discovers Sufism as well as Arabic music and poetry. She combines these experiences in her own enlightened, perhaps even rebellious manner, thereby finding her own path in life.

Two documentary films shown at the festival have made it their concern to overcome barriers. In After the Last Sky, Alia Arasoughly and her camera follow the peace and educational work of the Palestinian woman Nahida, whose village was destroyed by the Israeli army in 1948. Nahida meets two Israeli women, who today live in this same location, and together they work at coming to terms with the past.

In her film Salata Baladi, Egyptian director Nadia Kamel tells the story of her mother, who grew up in Cairo as the daughter of a Jew and an Italian Catholic mother, and later converted to Islam after her marriage to the Egyptian author Sa'ad Kamel.

Together with her grandchild, she reconstructs the history of her family over the last 100 years and thereby turns her film into a manifesto for tolerance and diversity.

Women's stories from a beauty salon

This diversity is also present in Nadine Labaki's film Caramel (Sukkar Banat), without a doubt the highlight of the festival. The film underscores that being Arab cannot simply be equated with being Muslim, as it portrays five women of different religious and social backgrounds gathered together in a Beirut beauty salon. 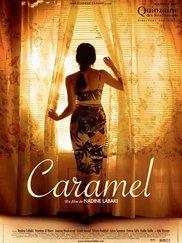 ​​Every woman develops her own personal love story:

Layal secretly meets with a married man, Nisrine is just about to get married, Rima feels attracted to other women, and Jamal wants to finally turn her dream of acting into reality. Rose, on the other hand, has to decide if she will leave Lilli, who requires her care, in order to spend the rest of her life with a charming Frenchman.

All of these stories could belong to any woman, and director Nadine Labaki thereby omits the clichés about Arab women to concentrate on the lives and loves of her characters. They don't define themselves as "Western" or "Arabic," but above all as people with typical human joys and problems.

Not least of all, the film's apt sense of humor in the portrayal of its characters probably contributed to its winning the Audience Award in San Sebastian, Spain, after its world premiere in Cannes and its being submitted by the Lebanese government for the Oscar nomination in the category of Best Foreign Language Film.

Tahani Rashed on Her Movie "These Girls"
"My Film Does Not Smear the Reputation of Egypt!"
The Egyptian director, Tahani Rashed, has highlighted through her documentary film "These Girls" the problem of street girls. The film has been awarded a prize at Cannes. Nelly Youssef conducts the following interview with the director

END_OF_DOCUMENT_TOKEN_TO_BE_REPLACED
Social media
and networks
Subscribe to our
newsletter