Arabs have known for years that their rulers were beyond reform. That is why, in order to have a chance to catch up with the rest of the free, developed world, many of them are now risking their lives to remove those regimes. By Omar Ashour 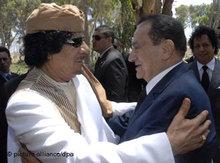 Muammar al-Qaddafi and Hosni Mubarak in Tripoli 2010: Both leaders put forth their sons in order to create a façade of reform

​​"The enemy of yesterday is the friend of today... [I]t was a real war, but those brothers are free men now." Thus spoke Saif al-Islam al-Qaddafi in March 2010, referring to the leaders of the Libyan Islamic Fighting Group (LIFG), an armed organization that had attempted to assassinate his father, Muammar al-Qaddafi, three times in the mid-1990's.

This may seem surprising. A few days ago, the very same man promised Libyans a "sea of blood" if his father's regime was toppled. Indeed, Saif al-Islam, an elegant, soft-spoken graduate of the London School of Economics, has now become a prime suspect in massive crimes against humanity.

People like me, who study the tactics of Arab dictatorships and the causes of their persistence, are less surprised, if at all, by this turn of events. Arab authoritarian regimes, unlike others that have given way to democracy, are incapable of self-reform; they have, however, mastered the tactics needed to prolong the life spans of their aging despotisms.

Always at your service: Qaddafi's grip to power was secured by the creation of a "hydra-headed security apparatus, mass-murder of opponents, widespread torture, and sustained censorship and repression," writes Omar Ashour

​​But Qaddafi's regime became an international pariah mainly for a series of terrorist plots abroad, not for crimes against humanity committed against Libyans. Oil interests and the regime's "dovish" face in recent years successfully extended its life.

Qaddafi's dovish period coincided with the rise to prominence of his second son, Saif al-Islam, and his sister Ayesha, the latter becoming a goodwill ambassador for the United Nations. Saif cultivated a reputation for being a "reformer": he called for a national-reconciliation process with opposition groups, supposedly liberalized the media, supported charity and development initiatives, and most importantly, became a face that the West could talk to.

The two public fronts for those initiatives were "Libya Tomorrow" and the "Al-Qaddafi Foundation for Development". Behind them, however, Libyan Military Intelligence, headed by Abdullah al-Sanosi, was giving conditional support and setting the general direction for their activities.

The "reforms" proposed by Saif al-Islam included releasing some political prisoners, especially those, like the LIFG, who declared their allegiance to Qaddafi's regime. But concrete steps leading to government transparency and accountability, such as inquiries into oil wealth and state expenditures, or serious investigation of crimes against humanity, were all beyond his will and imagination.

From elegant, soft-spoken graduate of the London School of Economics to prime suspect in massive crimes against humanity: Saif al-Islam Muammar al-Gaddafi

​​Despite the cosmetic nature of the "reforms", other regime factions, most notably those led by Saif al-Islam's brothers Mutassim, al-Sa'adi, and Khamis, challenged them. Behind the brothers were other security agencies: the Internal Security Forces, the Revolutionary Committees, and, to a lesser extent, the Jamahiriya Security Apparatus (Foreign Intelligence).

When I visited Tripoli in March 2010 for a "national reconciliation" conference, the conflicting statements given by Saif al-Islam and security officials surprised me. The head of Internal Security Forces, Colonel al-Tuhami Khaled, another principal suspect in the crimes currently being committed against Libyans, refused to call the process a "reconciliation". For him, it was "repentance from heresy".

Given the recent wave of uprisings, it is more evident than ever that any "reform" initiatives undertaken in the Arab world previously were aimed only at sustaining repressive dictatorships and escaping punishment for criminal abuse of power. The reform "debate" within these regimes boiled down to a struggle between different branches of the security-military apparatus over the best way to preserve the status quo.

History in the making

Arabs, of course, have known for years that their rulers were beyond reform. That is why, in order to have a chance to catch up with the rest of the free, developed world, many of them are now risking their lives to remove those regimes. What is happening today in the Arab world is history in the making, written in the blood, sweat, and tears of the victims of decades of violent repression.

When asked by a journalist what I would like to say to Saif al-Islam if I were ever to meet him again, I replied: "I hope to see you in the International Criminal Court, beside Mubarak and Ben Ali." Millions of Arabs of my generation and younger would probably give the same answer if asked what should become of the men who controlled their present and sought to destroy their future.

Omar Ashour is a lecturer in Middle East politics and Director of the Middle East Graduate Studies Program at the Institute of Arab and Islamic Studies, University of Exeter. He is the author of The De-Radicalization of Jihadists: Transforming Armed Islamist Movements.

Revolutions in the Middle East
Arab "Republics of Fear" at an End?
The recent protests in the Arab world have shown that military deterrence alone can no longer keep demonstrators at bay. Yet, how long can these autocratic systems remain in place? Birgit Kaspar reports from Beirut

END_OF_DOCUMENT_TOKEN_TO_BE_REPLACED
Social media
and networks
Subscribe to our
newsletter