Avoiding failure is sometimes a better objective than achieving great success, argues Richard N. Haass in his commentary. Ignoring the reality that the Middle East conflict is not even close to being ripe for resolution will lead to failure or worse 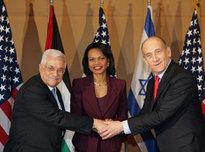 Calls for an agreement on the most controversial elements of a final peace settlement are unrealistic, says Haass

​​"Ripeness is all," concludes Edgar in King Lear. I will leave it to Shakespeare scholars to decipher what he had in mind. But for diplomats and historians, understanding the concept of ripeness is central to their jobs: it refers to how ready a negotiation or conflict is to be resolved.

This may sound academic, but it is anything but. The United States and the three other members of the Quartet – the European Union, Russia, and the United Nations – are planning to convene many of the parties to the Israeli-Arab conflict at a meeting near Washington this month.

The problem is that the conflict is not even close to being ripe for resolution. Ignoring this reality will lead to failure, if not catastrophe.

Ripeness has several elements: there must be a formula for the parties involved to adopt, a diplomatic process to get them to that point, and protagonists who are able and willing to make a deal.

It is not clear that any of these conditions exist in today's Middle East. Much has been said or written about what "final status" or peace between Israel and the Palestinians would look like, but important differences remain regarding borders, the status of Jerusalem and its holy places, the rights of refugees, the future of Israeli settlements, and security arrangements.

There is also a question of process. Who should be involved in negotiations? What issues should be on the agenda? What sort of activities, including violence and settlement activity, are to be precluded while negotiations take place?

The key question of local leadership

Most critical, though, is the condition of local leadership. Palestinian Authority President Mahmoud Abbas may want to sign a peace accord with Israel, but there is little evidence that he is in a position to do so. He has lost all authority in Gaza, and has a tenuous hold over the West Bank. If Palestine were a state, it would be judged to have failed.

Israeli Prime Minister Ehud Olmert is in a stronger but still uncertain position. His coalition government survives mainly because many members of Israel's parliament know that they would lose their seats in an early election. It is an open question whether the most that Olmert would likely be able and willing to offer would meet the least that Abbas would be able to accept.

Trying to end the Middle East conflict in such a climate would be futile. Worse yet, failure would strengthen those on both sides of the dispute who argue that diplomacy is a waste of time.

So what, then, should be done?

First, it is important that expectations be kept modest. "Success" needs to be defined narrowly. Calls for an agreement on the most controversial elements of a final peace settlement are unrealistic. Simply agreeing to an agenda for follow-up meetings would be an accomplishment. Here, and elsewhere, the US will need to take the lead; the parties cannot be expected to reach consensus by themselves.

Second, it is essential that this meeting be the start of a serious process, not a one-time event. Rigid timetables that history suggests would not be met should be eschewed. But no one should walk away doubting the determination of the US and other members of the Quartet to see this process succeed as quickly as possible.

Third, diplomacy cannot survive, much less thrive, amidst a deterioration of the day-to-day circumstances on the ground. More than anything else, Palestinians must come to associate peace and diplomacy with improvement in their living conditions. This requires improved security, inflows of aid and investment, and the curtailment of land expropriations that deny the promise of statehood. Israelis require and also deserve improved security.

Fourth, a path must be provided for those who did not attend the meeting to join the process at a later date. The most critical barrier for Hamas and others should be a clear commitment to forego armed violence in the pursuit of political ends.

Fifth, the Palestinian leadership cannot be expected to take risks for peace without political protection. This means that Arab governments, led by Egypt and Jordan, but including Saudi Arabia and other members of the Arab League, must publicly declare their willingness to support a peace that is based on coexistence with Israel.

It would also help if those countries in a position to do so underscored their preparedness to make funds available to help build a Palestinian state and to resettle both refugees and those living in settlements that are vacated under any peace accord.

For some, this approach will seem overly modest. But this is not yet the time for great ambition. The context for peace in the Middle East has deteriorated sharply in the seven years since the Clinton administration last convened the parties.

Today's Israeli and Palestinian leaders are far weaker than their predecessors; Hamas controls Gaza; Iran is more influential; additional settlements and a fence have been built; and the US is bogged down in Iraq and has lost standing throughout the region.

This is not an argument for drift. Neglect in the Middle East is rarely benign. But it is vital that new efforts do not cause more harm than good. Avoiding failure is sometimes a better objective than achieving great success. This is one such occasion.

Today's diplomats could do worse than recall the warning of the great French statesman Talleyrand: "Surtout, messieurs, point de zéle." Above all, not too much zeal.

Richard N. Haass is President of the Council on Foreign Relations and author of "The Opportunity: America's Moment to Alter History's Course"

German EU Presidency and the Middle East
"Between Political Inertia and a Lack of Vision for the Region"
What has the German EU presidency contributed toward the peace process in the Middle East? Ahmad Hissou discussed this issue with German journalist Stefan Buchen, Dr. Hadila Qazaz of the Heinrich Böll foundation in Ramallah and Dr. Rudolph al-Qareh, a specialist in European-Arab relations

Interview with Amira Hass
Peace Process as an Empty Phrase
Amira Hass is the only Israeli journalist who shares the day-to-day lives of the Palestinians she writes about. In this interview, she talks about her new book (“Gaza”)and about the situation facing Palestinians who live in the occupied territories. Lennart Lehmann talked to her

END_OF_DOCUMENT_TOKEN_TO_BE_REPLACED
Social media
and networks
Subscribe to our
newsletter