Arab Photographers' View of the "Orient"
Looking into the Blind Spot

Frequently criticized as they are, images that "orientalize" Middle Eastern subjects are widespread and well known. The Arab Image Foundation, however, presents other views of this part of the world. Browsing its online collection is a voyage of discovery, says Mona Sarkis

​​ In 2009, the Hamburg Museum of Ethnology exhibited 18,000 photographs, predominantly of the Middle East, most of which were taken by Europeans from 1864 onwards. At the same time, the Jewish Historical Museum in Amsterdam held an exhibition of photographs of Palestine that were taken between 1898 and 1931 and bought by the Dutchman Arie Speelman in the "American Colony" in Jerusalem in the 1920s.

As if more than twelve centuries of continuous Muslim settlement could simply be ignored; as if a Hebraic-Christian Ancient World were the one and only truth. The description of the American Colony photographs on Amazon.de proves that this idea still endures: "Just before intensive settlement began, bringing with it the modern world, the landscape in Palestine was barren and stony, and its inhabitants seem to us exotic and strange." 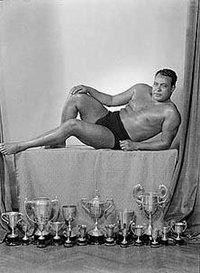 The stylization of success was a popular theme for Arab photographers

​​ Orientalism of the most unpleasant kind, undoubtedly. Yet its overwhelming presence in the public domain can lead to the erroneous conclusion that early photography in the Arab world consisted of nothing else – which in itself is pure Orientalism. Anyone who has to be persuaded that this is not the case need only look at the photography archive of the Arab Image Foundation, founded in Beirut in 1997 by the video artists and photographers Akram Zaatari, Fuad el-Koury and Samer Mohdad. This is, to date, the biggest archive of photographs from the region to be made available online, and it is full of surprises.

These include the meticulous documentation of post-mortems in the lecture rooms of Arab medical faculties around 1900, loincloth-clad boxing champions in 1920s Syria, and the Armenian photographer Van Leo, who in 1950s Cairo took posed photos of himself in dramatic costume and of young women in no costume at all.

Meanwhile Hashem al-Madani made it possible for some southern Lebanese to do what film stars usually do in front of the camera: kiss. As this was more socially acceptable with a partner of the same sex (some people preferred this anyway), it resulted in a whole series of photographs of women – or men – homing in on each other, nose to nose.

Just like the film stars: Hashem al-Madani had a penchant for photographing people kissing; surprisingly, it was more socially acceptable to photograph two people of the same sex in an embrace

​​ "The young Arab generations themselves don't know how varied the photos taken by their forbears actually were," says co-founder Zaatari. The visualization of a pictorial tradition that had previously been edited out was therefore a decisive factor in collecting what are now more than 400,000 photographs by more than 250 photographers, both Arab and foreign, dating back to 7 November 1839.

This was the day on which the Frenchman Frédéric Goupil-Fesquet took what was probably the first photo on Arab soil, one of an Alexandrine palace. The process of daguerreotyping had been presented for the first time only a few months prior to this, in Paris in August. "So there is a direct connection between the history of photography and Europe's rediscovery of the Middle East. On the other hand, Arab societies very quickly adopted the medium for themselves," Zaatari emphasizes. This early friction between the two, which contributed to the imagery that developed on the Arab side, is one of the elements in need of reinterpretation – especially where Orientalism is concerned.

Take, for example, portraits of the Arab bourgeoisie between 1860 and 1920, for example, where the subjects are dressed like ladies and gentlemen of the West and are positioned before pianos or automobiles – as if they had imitated the European self-images of the day down to the last detail of the composition. 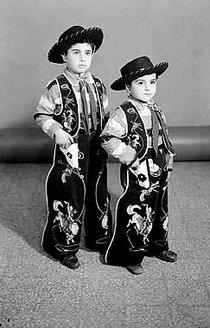 Conscious imitation: according to Stephen Sheehi, the subjects did not "passively adopt a European image; they did so as a result of a new self-definition"

​​ Stephen Sheehi from the University of South Carolina nods, but picks up on precisely this point: the imitation, he says, was a conscious one. Explaining this, the author of the book Foundations of Modern Arab Identity refers to the Nahda, the Arab Renaissance, which started in the mid-nineteenth century in response to two major changes that were sweeping across the Ottoman Empire: political-economic interference from Europe, and the tanzimat, the reforms by virtue of which the vast but waning empire hoped to transform itself into a modern nation. "Rationalism" and "science" became the answers to everything. "From Jerusalem to Baghdad, the Arab bourgeoisie defined themselves as individualistic, secular, strong leaders," says Sheehi.

They did not, therefore, passively adopt a European image; they did so as a result of a new self-definition – and not least in order to fight Zionist and British ambitions with their own weapons.

Parallel to this, of course, orientalism in photography continued to flourish; the collections mentioned at the start of this article attest to this, and Arab and Armenian photographers (Saboungi in Beirut, Legekian in Cairo, or Krikorian and Raad in Palestine) also exhibited this tendency. After all, given the growing Western tourist industry's demand for souvenirs, orientalism translated into hard cash.

But what was it that induced the local clientele to slip on a Bedouin costume and pose before picturesque studio backdrops? Sheehi sees it as a self-orientalization, and again as something the protagonists consciously chose to do. The Nahda, he says, was not only the era of "civilization" but also that of colonialism, which dismissed the local population as inferior, a people to be patronized.

Under burgeoning Arab nationalism, romanticization soon developed into a form of resistance among the petty bourgeoisie. "They ascribed to themselves an 'authentic self' – that of the 'noble savage', a paragon of honour, manliness and spirituality. The implication was: 'We may not be progressive, but we are Arabs. You are not. We have something that the modern age can neither give to nor take away from us.' It was a form of resistance." 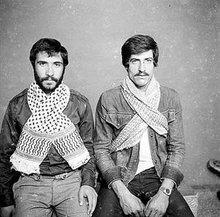 ​​ There remains the question of the armed resistance fighters. Those, for example, who visited al-Madani's studio in the 1970s: serious men, without weapons, but with the Palestinian keffiyeh crossed over their chests, sometimes over a snazzy flower-power shirt – a stylistic incongruity that bestows upon them a strangely calm factuality.

These photographs could not be more of a contrast to those of the "bandits" who launched attacks on colonial troops in the first third of the twentieth century. As photojournalism started to become popular, the "bandits" boosted the turnover of the print media. People wanted to see them, mistreated and abused; they wanted to study them even as they dangled from a gallows. Did this merely indicate revulsion for their "lawlessness", or does it also suggest a fascination with it? Or was there perhaps, as Sheehi queries, a silent colloquy between the photographs of the brutal outlaws and those of respectable citizens in their historicizing jellabas, smiling into the lens with rifles at their sides?

In any case, the photographs that the historian Jibrail Jabbur (1900–1991), one of the leading lights of modern Arab pedagogy, took of his wife Asma are certainly worthy of note. In 1920, he depicted her wearing traditional male headgear, uniform and cartridge belt. In 1940, she appears as a matriarchal Bedouin. In her day-to-day life, however, this woman with the fashionably bobbed hair always looked up to date: in one photo she reclines on a bed with her child; in another, clad in a little skirt, she perches casually atop a chest of drawers so as to look her husband in the eye.

It is obvious that from the very beginning of photography, the Arab bourgeoisie worked to establish codes of its own: amorphous, oriented sometimes towards a European viewpoint, sometimes against it – but always self-aware.

Contemporary Art from Saudi Arabia
The Kaaba as a Security Zone
A new generation of young Saudi artists is emerging, showing that momentum for change is possible even in a conservative country such as this. When it comes to exhibiting their work however, they have only been able to do that abroad. Werner Bloch reports

Contemparabia 2010 in Beirut
Looking the Ghosts of the Past in the Face
It is characteristic of many post-war societies that people either genuinely forget or deliberately suppress memories of what went on during the war and either yearn for the peaceful pre-war days or focus on a bright new future. A number of Lebanese artists exhibiting at Contemparabia 2010 in Beirut, however, are trying to buck this trend and jog people's memories of what went on during the country's civil war. Charlotte Bank reports

END_OF_DOCUMENT_TOKEN_TO_BE_REPLACED
Social media
and networks
Subscribe to our
newsletter