The silent puppet performance ″One Thousand and One Titanics″ creatively combines traditional performing techniques such as shadow and glove puppetry with pantomime, music and dance to tell the story of those displaced by war and conflict. By Changiz M. Varzi

At a time when refugee boats continue to arrive on the shores of Europe and the EU pursues its chaotic policy of accepting or turning back migrants, the Arab Puppet Theatre Foundation (APTF) has been touring the world and telling the story of those who flee their homeland in rubber boats, commonly referred to in the Middle East as ″death boats″.

″Scheherazade, the legendary storyteller of One Thousand and One Nights, would not have told any story if she were alive today,″ Mahmoud Hourani, the APTF founder, says with a bitter smile. Instead, ″she would have taken one of the rubber boats to Europe,″ adds the British-Palestinian performer, playwright and director. Hourani′s latest play tells the story of a young man escaping his war-torn village and going to Europe in a rubber boat.

The show presents the inner conflict of those who leave their loved ones behind and seek a safe haven. According to Hourani, the frequent loss of death boats in the Mediterranean Sea is akin to the tragedy that befell the Titanic. ″The only difference is that the sinking of the Titanic was one single incident, but the story of refugees′ death boats is neverending, like Scheherazade′s stories that continued for one thousand and one nights.″ 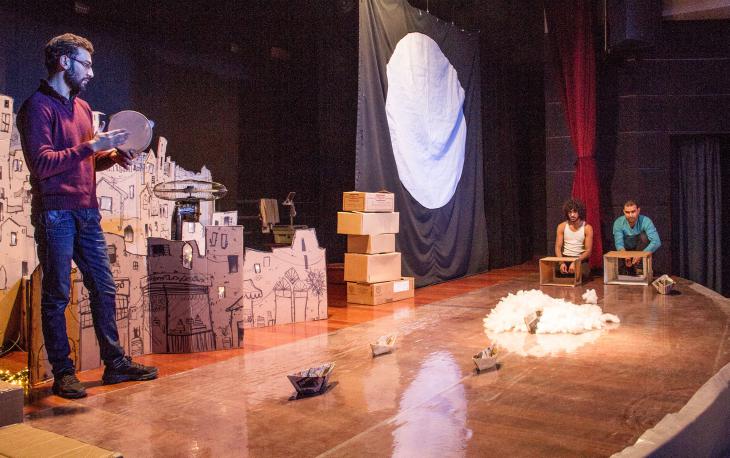 ″People only see the tip of the iceberg when they look at the crisis from the outside. They never understand all the pain and grief that lies within,″ says Abdolrahman Al-Khalil. ″For example, no one talks about the hardships of those who stay behind and wait for a single piece of news from those who have left″

APTF, established in 2008 in Lebanon as an art NGO, deploys a unique artistic language that breaks with traditional puppet show convention. For the APTF artists, any object is a potential puppet and any single prop can suddenly be made to come to life. For instance, just as Ahmad goes to get into a boat, his suitcase moves away from him and refuses to come with him.

″In creating art performances and directing puppet shows in APTF, we aim to challenge the assumption that puppet shows only make use of dolls and glove puppets and that children are the primary audience,″ Hourani explains. ″Puppets speak to everybody, not just children; puppets echo voices filled with pain, frustration and hope.″

For the members of APTF, the migrant crisis is not a tragedy taking place in a remote corner of the world. Rakan Abdolrahman Al-Khalil, the 21-year-old Palestinian puppeteer who grew up in Burj el-Shemali refugee camp in Lebanon, is intimately acquainted with the issue. In 2015, despite the objections of his family, his elder brother crossed the Mediterranean Sea in a death boat.

″People only see the tip of the iceberg when they look at the crisis from the outside. They never understand all the pain and grief that lies within,″ says Al-Khalil. ″For example, no one talks about the hardships of those who stay behind and wait for a single piece of news from those who have left. No one knew what had happened to my family, from the day my brother suddenly disappeared until the day he came ashore and was able to send us a message.″

Moustafa Hejazi, a young puppeteer form Beirut′s southern suburbs of Dahyah, is also familiar with the problem. In late 2015, his close friend from Syria crossed the sea to seek refuge in Europe. According to Hejazi, this issue is neither limited to the Middle East nor to the current time.

″Because of these boats we are losing our people one by one and it is not just the Arab world that is being affected,″ he points out. ″The Middle East may be in the spotlight now, but there are displaced persons everywhere from Burma to Latin America, Africa and Australia. The original residents of several regions in the world have no choice other than to leave their homes and face an unknown future.″ 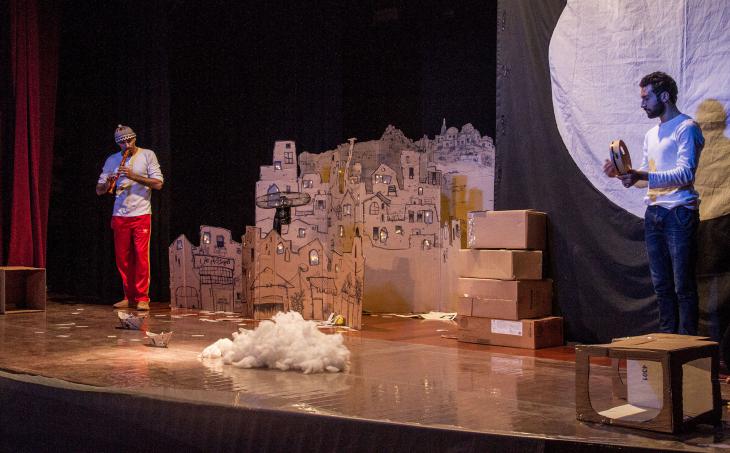 In 2015, ″One Thousand and One Titanics″ toured Sweden, Denmark, and Tunisia, enjoying a warm reception from the European audiences on the receiving end of the refugee crisis. Now, having performed in Lebanon, the group is rehearsing to go on stage in Germany and the UK to bring the story of the refugees to those countries.

Samar Anouse, a 43-year-old from Lebanon, who recently viewed ″One Thousand and One Titanics″ in Tripoli, believes that it is very easy for ″everyone in the world″ to comprehend the main message of the play.

″The performance is about the odyssey of humankind and everyone understands it,″ he says. ″It reminds me of the thousands of Lebanese who emigrated from my city and country because of the fifteen-year-long civil war; I am sure anyone who has experienced similar issues will fully understand this show.″

The show, which is performed in silence, ends with the furious rustling of the light blue plastic sheet resembling the Mediterranean Sea. Ahmad tries to find his way out of the waves that surround him and runs from one side of the stage to the other, but he is trapped. The stage fades into darkness and the sound of the rumbling plastic dies down.

After coming to power, the Islamist group imposed a ban on girls' education, prompting some Afghans to set up an underground school. Hussain Sirat and Ahmad Hakimi spoke to some ... END_OF_DOCUMENT_TOKEN_TO_BE_REPLACED

As the Western world emerges from a holiday season made less festive by COVID-19, millions of children in Afghanistan are starting 2022 facing the prospect of famine, illness, and ... END_OF_DOCUMENT_TOKEN_TO_BE_REPLACED

Each year, thousands of people travel to the Turkish city of Konya to attend a week-long series of events and ceremonies that mark the death of the 13th-century Islamic poet, ... END_OF_DOCUMENT_TOKEN_TO_BE_REPLACED

Their exhausting escape from the Taliban took them from Kabul to Qatar, though European cities and U.S. military bases. But now this Afghan family has finally arrived in a small ... END_OF_DOCUMENT_TOKEN_TO_BE_REPLACED

The Pakistani Taliban, known by the acronym TTP, are regrouping and reorganising, with their leadership headquartered in neighbouring Afghanistan, according to a U.N. report from ... END_OF_DOCUMENT_TOKEN_TO_BE_REPLACED

END_OF_DOCUMENT_TOKEN_TO_BE_REPLACED
Social media
and networks
Subscribe to our
newsletter