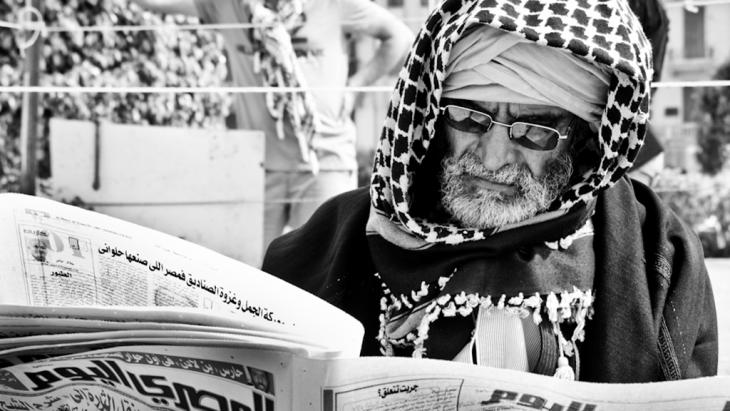 Opinion in the Arab world is divided when it comes to the policies adopted by Recep Tayyip Erdogan following the coup attempt in Turkey. Islamists feel their position has been strengthened, while liberal and conservative Arabs look upon recent developments with concern. Analysis by Joseph Croitoru

Reactions in the Arab world to the dramatic events that recently unfolded in Turkey varied widely. This is hardly surprising considering how attitudes toward the Turkish AKP government were deeply divided even before the attempted coup.

Turkish secularism has always been anathema to Arab Islamic conservatives. Similar to their liberal antagonists, however, they are now watching the gradual undermining of Kemalism by Erdogan's Islamist-tinged party with concern. Apprehension continued to grow when the Turkish head of state declared his advocacy for the Muslim Brotherhood and its followers — especially since they are subject to persecution in Egypt and Saudi Arabia.

In Egypt, where President Abdul Fattah Al-Sisi, one of Erdogan's harshest Arab critics, himself came to power through a military coup, the pro-regime Cairo newspapers immediately proclaimed the "deposal of Erdogan" following the events in Turkey. Even once the premature jubilation had subsided, their attitude scarcely changed.

Ezat Ibrahim, editorial director of the newspaper "Al-Ahram", argues that the toppling of ruling Islamists who seek to install an Islamic dictatorship is not anti-democratic, but on the contrary serves to protect democracy. For him and other Egyptian opinion-makers, the current political purges in Turkey are a prime example of what the opponents of the Muslim Brotherhood in Egypt could expect should the Islamists rise to power there again.

The liberal Arab camp initially praised the Turkish people for their courageous opposition to the conspirators – praise that was also meant as a challenge to the Egyptians to fight for more democracy. However, even the liberals are unable to make their point without analogies, analogies which are not unlike the ones made by those loyal to the regime. In an article in the Egyptian newspaper "Al-Masry Al-Youm", commentator Mohammed Al-Kafrawi castigates the mass arrests in Turkey, which have gradually eroded secularism there, as the "Erdoganisation" of the country. This was probably also meant as a side-swipe at the cult of personality around President Al-Sisi, who justified the persecution of local Islamists with the supposedly imminent "Muslim Brotherisation" of Egypt. 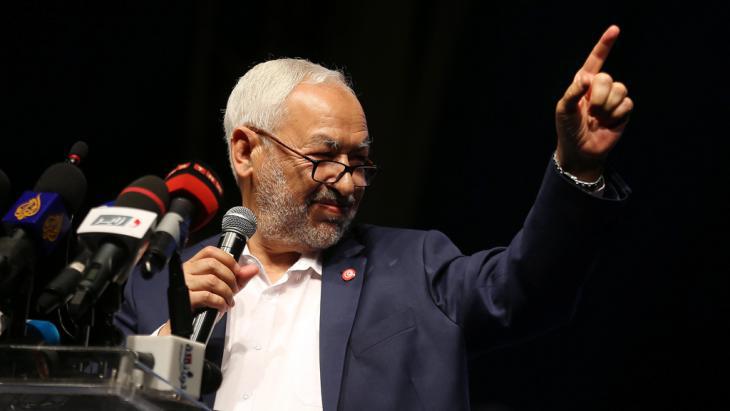 Open admiration: that Erdogan's government managed to fend off a military coup is for Al-Ghannouchi not only a testament to the strength of the country's democracy; he told the state-run Turkish news agency Anadolu that Turkey had herewith demonstrated once more that it deserves to be leader, not only of the region, but of the entire Islamic world

In Tunisia, the reports from Turkey shared the headlines with the dramatic news of the latest political crisis in Tunis and the formation of a new unity government. Once again taking part in the government is the Islamist "Ennahda" party – after secularists mistakenly believed it had been marginalised once and for all – whose leader, Rachid Al-Ghannouchi, is a known Erdogan admirer. That Erdogan's government managed to fend off a military coup is for Al-Ghannouchi not only a testament to the strength of the country's democracy; he told the state-run Turkish news agency Anadolu that Turkey had herewith demonstrated once more that it deserves to be leader, not only of the region, but of the entire Islamic world.

Neither the Islamists in Tunisia nor those in other Arab countries are much bothered by the political cleansing taking place in Turkey. They all share the same opinion regarding Turkey's role as Islamic leader and when Erdogan declares someone an enemy, that person is their enemy as well. One often hears in these circles the same conviction as that held by the Turkish supporters of the Muslim Brotherhood that Fethullah Gulen is actually an American CIA agent who has the backing of several "Western intelligence agencies". This claim was made in the main newspaper in the Gaza Strip, "Felesteen", the mouthpiece of the Palestinian Hamas, which is sponsored by the AKP government.

No sympathy for Gulenists

Although Ankara's support of the Arab Islamists has provoked tensions with Riyadh in recent years, the Saudi royal house now views Erdogan as an ally in the fight against the terrorist militia "Islamic State" (IS). The Saudi elite has no sympathies with the Gulenists anyway. They are worse than the IS, claimed the Saudi billionaire Prince Al-Walid ibn Talal Al-Saud in an interview with the Turkish newspaper "Hurriyet".

The Saudi papers avoid such blunt commentary and have remained silent on the repression in Turkey, but they do remark strikingly often as a side note that the West does not look favourably on these measures. 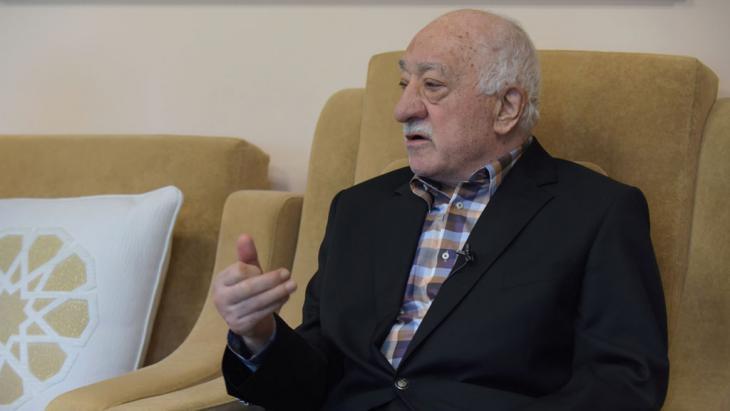 Fethullah Gulen as scapegoat: the Saudi elite has no sympathy with the Hizmet movement anyway. They are worse than the IS, claimed the Saudi billionaire Prince Al-Walid ibn Talal Al-Saud in an interview with the Turkish newspaper "Hurriyet"

Even the Saudi editorial boards, however, who ostensibly support the Turkish government's current reform course, are gradually running out of patience in the face of the endless mass arrests and dismissals. One sign of this change in mood is a long interview recently conducted by the international Saudi television station "Al-Arabiya" with Fethullah Gulen – which however vanished again only a few hours later from the station's website.

In the meantime, open criticism of Erdogan's actions can be found in the Saudi media. Every further wave of arrests is merely counterproductive, says columnist Bikram Vohra in the Saudi "Arab News": "If suspicion becomes paranoia then the loyalty factor is dismissed and the damage is devastating." The Erdogan government should ease up on the cleansing, he says, and instead focus on the real dangers threatening the country.

On the way to a neo-Ottoman sultanate?

Because Erdogan is calling for the overthrow of Syrian President Bashar Al-Assad, his Turkish victims can rely on the solidarity of the Damascus newspapers. In "Al-Watan", the Turkish head of state has been accused of engineering the coup attempt himself as a way to settle his personal accounts with his former companion Gulen. Kahtan Al-Suyufi alleges that Erdogan is pursuing the goal of destroying Ataturk's secular state. The secular Syrian regime thus views AKP-ruled Turkey as a long-term threat, especially since, as Al-Suyufi writes, Erdogan is purportedly striving for the establishment of a neo-Ottoman sultanate.

Fewer detailed reports on the political cleansing in the neighbouring state appear in Syria than elsewhere in the Arab media – most likely because they could remind readers of the similar way the Syrian regime has dealt with its own opposition. Damascus thus prefers to publish criticism focusing on the "undemocratic" AKP regime, such as that voiced by well-known Turkish writers like Nedim Gursel, who lives in Paris.

The factions in the Syrian opposition that receive direct supported from the Turkish government avoid mentioning Erdogan's vendetta against actual or perceived Gulenists. On the Arabic website of the "National Syrian Coalition", which calls itself the "Geneva Media Unit", most of the reports about Turkey come directly from the Arabic desk of the state-run Turkish news agency "Anadolu".

In secular opposition circles that are critical of Turkey, by contrast, there is concern about the progressive Islamisation of Turkey – a concern that is ironically shared by those loyal to Assad. The ones who will suffer most from these developments will be the Turkish people, writes Ahmad Al-Schami in "Enab Baladi", one of the magazines of the Syrian insurgents. Turkey runs the risk of becoming a failed state – anti-Western, isolated and ruled by a "Turkish" Assad.

Abortions are illegal in Egypt unless they are necessary to save a married woman's life. But that doesn't stop local women from having one. Egyptian society needs to acknowledge ... END_OF_DOCUMENT_TOKEN_TO_BE_REPLACED

Food prices doubled, salaries halved, banks restricting withdrawals: Egyptians now have the same problems as the Lebanese. But if things get worse here, the fallout will be far ... END_OF_DOCUMENT_TOKEN_TO_BE_REPLACED

Giessen, Eichsfeld, Kusel, Berlin – cars bearing old German number plates are the latest trend on the streets of Cairo. Many Egyptians regard the discarded plates as chic. What ... END_OF_DOCUMENT_TOKEN_TO_BE_REPLACED

Egyptian Sufis have been on the defensive against the country's Islamists for decades. Meanwhile, interest in mysticism is growing among the young members of Cairo’s middle and ... END_OF_DOCUMENT_TOKEN_TO_BE_REPLACED

Chinese President Xi Jinping's visit to Saudi Arabia in December 2022 may have rattled Washington, but it simply highlighted the Arabs’ desire to diversify their foreign relations ... END_OF_DOCUMENT_TOKEN_TO_BE_REPLACED

END_OF_DOCUMENT_TOKEN_TO_BE_REPLACED
Social media
and networks
Subscribe to our
newsletter