On 1 November 1996 the Arab news network al-Jazeera started broadcasting from Qatar. Its bold news coverage sent shockwaves through the Arab world, and soon became the target of stinging criticism from both Western and Arab governments. By Larissa Bender 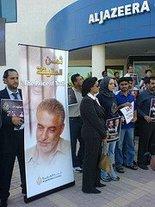 An event in support of jailed al-Jazeera star reporter Taysir Alony, who was convicted by a Spanish court of acting as an al-Qaida courier

​​Taysir Alony has made a name for himself. When the Taliban destroyed the Bamiyan Buddha statues in March 2001, the star reporter from al-Jazeera was the only journalist to film their destruction, and the images were seen by viewers around the world.

Today moviegoers can see "The Giant Buddhas", a documentary film by German filmmaker Christian Frei that explores the story of the famous Buddha statues. Taysir Alony is also interviewed in the film. And when the US launched a military campaign against the Taliban after 9/11, Taysir Alony was the only journalist to report live from the front.

Five years later and ten years after the founding of the world's leading Arab satellite news network on 1 November 1996, "al-Jazeera" is recognized around the globe. It has become the 5th most recognized international brand, ranking behind household names like Apple, Google, Ikea, and Starbucks.

Al-Jazeera has established a worldwide network of bureaus and correspondents and launched a number of subsidiary channels, including three sports channels, a documentary channel, a live channel, and a children's channel. Viewers who are particularly keen on staying informed on world events can subscribe to al-Jazeera Mobile and receive text messages on their cell phones. An estimated 40 to 50 million Arab-speaking viewers regularly watch the network.

An English-language channel has been in the planning for over a year and will soon provide non-Arab viewers with news and information from – and about – the Arab world. On 26 March 2003, the TV station was honored with a special prize from the British organization "Index on Censorship" for its courage in circumventing censorship.

This groundbreaking TV channel funded by the Qatari government owes its meteoric rise in popularity to the professionalism of its staff and its determination to produce a counterbalance to CNN and BBC for the Arab "man on the street." When the Emir of Qatar launched al-Jazeera, 80% of the staff were former employees of the BBC World Service's short-lived Arab Language TV station, and the new Qatari channel immediately sought to break the Western news monopoly on reporting for the Arab world.

Only two years later, during the allied attack on Iraq in 1998, al-Jazeera correspondents were the only journalists to report live from Baghdad. People around the world started to talk about the "Arab CNN."

For the first time in the Arab world, a news channel had gone on the air that was not afraid to tackle controversial issues. The broadcasters had taken up the cause of promoting democratization in the Arab world and advocating human rights, and they worked to break political and social taboos.

Talk shows with names like "presenting the other side" and "more than one opinion" were a novelty in the Arab world, offering various points of view and, for the first time ever, giving Arab opposition leaders a platform to express their ideas – all of this in a part of the world where the media is normally strictly controlled and censored by the state.

At the same time, al-Jazeera was the first Arab TV station to let Israeli experts, journalists, and politicians have their say. All this boosted the credibility of the new TV station and established new journalistic standards for the Arab world.

But the network soon came under criticism. For instance, its exclusive coverage – in 1998 in Iraq and later on in Afghanistan – raised many questions as al-Jazeera was the only news channel accepted by the governments of these countries. The station was accused of being too close to the Taliban and Saddam Hussein.

It was a similar story during the Iraq war in 2003. Critics argued that up until the overthrow of Saddam Hussein, al-Jazeera had devoted virtually no airtime to the Iraqi opposition.

The Baghdad bureau of the Qatar-based TV station has been closed since August 2005. Governments in countries like Kuwait, Algeria, and Jordan also have their difficulties with the station – and Saudi Arabia has never allowed al-Jazeera reporters to work in the country.

Trouble with the US

Even the US has had trouble accepting the media competition from Qatar. Images of US soldiers killed in action and civilian casualties in Afghanistan and Iraq clearly contradicted the official "mission-accomplished" rhetoric of the US administration, which endorsed the notion of "surgical" military operations. Time and again, the station's coverage led to US accusations of "false reporting," and in 2001 the al-Jazeera bureau in Kabul was even destroyed in a US air raid.

During a US air strike on the Baghdad headquarters of al-Jazeera in 2003, a journalist and a technician were killed during a broadcast.

But the most severe allegations ever made against al-Jazeera were that it has allowed itself to be used as a mouthpiece for top terrorists like Osama bin Laden and Aiman al-Zawahiri, Abu Musab al-Zarqawi and other terrorist groups in Iraq. The network has received a number of videos showing terrorists threatening to kill hostages, and videos from terrorists claiming responsibility for attacks.

Some of this footage has been broadcast in full length and with the original sound. It was only after stinging international criticism that al-Jazeera changed its policies and only played excerpts of the tapes.

Yet even short film sequences can have a powerful impact on young Arab youths who are unemployed, have few prospects for the future, and harbor a hatred for their own governments and "the West."

In April of this year, al-Jazeera broadcast clips all day long of a video that it had received from Abu Musab al-Zarqawi. It showed the terrorist leader of the Iraqi al-Qaida group as he walked through the desert, armed to the teeth, and explained to his virtual viewers how it was the duty of every Muslim to resist the occupying forces. He was dressed in black and wore his trademark wool cap.

A few days later, an Arab newspaper published an article about a new phenomenon that had emerged in the Palestinian occupied territories, where many youths had started to wear so-called al-Zarqawi caps as a new-found symbol of resistance!

Just a few weeks ago, shortly before the fifth anniversary of 9/11, Osama bin Laden again used al-Jazeera to address his latest message to the world. The network had received a video tape with almost 90 minutes of material, produced by al-Qaida's own media production company "as-Sahab," complete with English subtitles. Some of the broadcast excerpts showed Osama bin Laden with Ramzi bin al-Shibh, who is currently in US custody, as the two men apparently planned the attacks of September 2001.

Five years after September 11th, two of the masterminds behind the attacks were allowed to give their farewell speech to the world, thanks to al-Jazeera. In response to widespread condemnation for showing such videos, the station stands by its claim that it only broadcasts material that is newsworthy.

Another source of criticism has been the station's policy of showing shockingly graphic images, including mutilated corpses and severely injured soldiers and civilians, images that most Europeans would consider an affront to human dignity. Footage of the recent fighting in Lebanon was particularly disturbing. The al-Jazeera bureau chief in Berlin justified the broadcasting of such pictures by pointing out that different cultures have different ways of dealing with death.

"This business of violating a dead person's dignity when you show his body is a Western notion. Nothing like that exists in the Arab world," said Aktham Suliman, head of al-Jazeera Germany, in an interview with Qantara.de.

Recently a number of Arab intellectuals have criticized the network from an entirely different perspective. They accuse al-Jazeera of allowing itself to be increasingly manipulated by the Muslim Brotherhood. The Tunisian lawyer and journalist Khaled Choukat, who lives in Rotterdam, is among the most outspoken critics.

He maintains that the station has lost its independence and "has been reduced to a political and ideological organization that merely proclaims its points of view to Arab viewers." He goes one step further when he writes: "Al-Jazeera has been hijacked by the international Muslim Brotherhood organization (…), loyalty to the organization has now taken priority over the professionalism of staff members."

Choukat also leaves no doubt that the Islamic scholar Yusuf al-Qaradawi is the man behind this development.

Yusuf al-Qaradawi, who likes to think of himself as a proponent of a "moderate Islam," has been with al-Jazeera right from the beginning with his regular Sunday program, "Islamic Law and Life." A widely respected scholar in the Islamic world, his controversial views can be seen on his website, where he defends Palestinian suicide bombers as a legitimate defense against Israeli policies.

Al-Qaradawi feels that such attackers have the status of martyrs, a term that is commonly used in the news coverage of al-Jazeera to describe people who die in the cause of defending their country – but is not employed by the network's anchors and reporters to refer to suicide bombers.

Ten years after the founding of the world's leading Arab satellite TV new network, what has happened to the noble intentions of yesteryear? Has al-Jazeera degenerated to "Bin Laden TV"? Is the station dominated by the Muslim Brotherhood? Does it still intend to break social and religious taboos? Has its courageous news coverage instilled fear in the hearts of Arab dictators?

There are no clear answers to the many questions surrounding al-Jazeera. In any case, the founding of al-Jazeera has stirred up the Arab world. Arab regimes may not have stepped down in favor of democratic governments, but thanks to al-Jazeera, dictators can no longer do as they please without the general public knowing about it.

One of the star al-Jazeera correspondents of the early years, however, has been behind bars in a Spanish prison for a number of years. Taysir Alony was convicted in 2005 of acting as a financial courier for al-Qaida in Afghanistan.

Arab Media under Discussion
"In the Arab World, the Media Are Seen as Part of the Conflict"
What effect do images have on television viewers, and what are their expectations of the media? Qantara.de talked with three Arab media representatives, Khaled Hroub, Nakhle El Hage, and Aktham Suliman

Satellite Television in the Muslim World
Limited Scope of Democratic Content
Satellite television has broken the state's monopoly on information in the Muslim world. But what role do the media play in the democratisation of the region? Qantara.de asked media expert Shir Mohammad Rawan

END_OF_DOCUMENT_TOKEN_TO_BE_REPLACED
Social media
and networks
Subscribe to our
newsletter