Finally, the third factor is that the global political zeitgeist has left its mark. Now that unpredictable egomaniacs are calling democracy into question here in the West, no one is prepared to talk about the "democratisation" of others anymore. The desire to see regimes fall seems to have passed. It is hard to imagine any German politician still seriously advocating a deployment of the Bundeswehr in Afghanistan today, based on the argument that the West must liberate Afghan women and bring democracy to Kabul.

An appeal to the autocrats of the Arab world

Furthermore, no U.S. president since 1945 has relegated the idea of democracy to such a minor role – to put it mildly – as Donald Trump. The missionary-interventionist zeal of George W. Bush's neocons had already come to an end when Obama took office in 2009. Rhetorically, though, Obama continued to pay lip service to the traditional U.S. ideal of global democratisation. His sympathy with those around the world striving for dignity and freedom was beyond question. In his historic speech in Cairo in 2009 he warned the Arab autocrats: "You must maintain your power through consent, not coercion." The autocrats had no idea at the time what was in store for them in the coming decade. 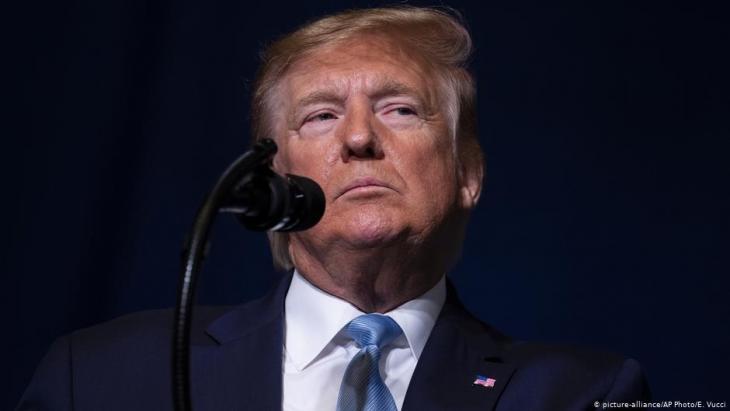 Arab autocrats the Middle East's best option: Trump has no use for America's role as a champion of freedom and democracy. He has demonstrated beyond a doubt that he is not on the side of the discontented masses. He once called Egypt's military ruler Abdul Fattah al-Sisi "my favourite dictator" – of all people, the man who put an end to any hope of change in the country that was the heartland of the Arab Spring and buried the democratic project on the Nile

Trump has no use for America's role as a champion of freedom and democracy. He has demonstrated beyond a doubt that he is not on the side of the discontented masses. He once called Egypt's military ruler Abdul Fattah al-Sisi "my favourite dictator" – of all people, the man who put an end to any hope of change in the country that was the heartland of the Arab Spring and buried the democratic project on the Nile. Perhaps Trump is more honest than Bush or Obama, or at least he makes no secret of the fact that he sees as the best option a Middle East held together by autocrats.

The future of the region, however, will ultimately be decided on the streets of Algiers, Cairo or Baghdad. The past decade has shown that it is impossible to hold back the forces pushing for change in conservative societies and calcified political systems in the Middle East. So far, not much has actually changed. Only four percent of the people in the region live in countries that are considered "free" according to the freedom index published by the U.S. organisation Freedom House (Israel and Tunisia). An overwhelming majority are deprived of fundamental rights.

So there is reason enough to protest. Whether in the long run the uprisings represent a new wave of democratisation, or whether authoritarianism is indeed changing under the pressure from the streets will probably not be conclusively answered next year or the year after.

But one thing is certain: while the early 2000s went down in history as the years of the "war on terror", the 2010s heralded the beginning of a process that could well take decades to fully unfold in the Arab world and – as Egypt has shown – will follow neither a straightforward course, nor necessarily bring about the desired results. And this is precisely why the fearless protesters in the Middle East and North Africa who are not willing to give up their hope of a life in greater freedom and dignity deserve our support – and a bit of patience.

Algerian scholar Said Djabelkhir rejects the charge of "offending Islam". In interview with Ismail Assam, he maintains that he has been wilfully misconstrued. At the same time, he ... END_OF_DOCUMENT_TOKEN_TO_BE_REPLACED

Saturday's historically low election turnout was a reflection of Algerians' ongoing frustration with the political status quo. Faced with mounting state repression, however, the ... END_OF_DOCUMENT_TOKEN_TO_BE_REPLACED

Morocco and the European Union are at cross purposes when it comes to the Western Sahara. And, as Germany does not support Moroccan claims to the territory, a major conflict has ... END_OF_DOCUMENT_TOKEN_TO_BE_REPLACED

Recep Tayyip Erdogan, disappointed by the European Union’s reluctance to integrate Turkey into its ranks, has re-directed his country’s diplomacy toward the Maghreb and Africa to ... END_OF_DOCUMENT_TOKEN_TO_BE_REPLACED

Using a graphic novel to address a contentious issue like the Algerian war of independence may seem an odd choice, but new release "Algeriennes", translated into English by Ivanka ... END_OF_DOCUMENT_TOKEN_TO_BE_REPLACED
Author:
Jannis Hagmann
Date:
Mail:
Send via mail

END_OF_DOCUMENT_TOKEN_TO_BE_REPLACED
Social media
and networks
Subscribe to our
newsletter