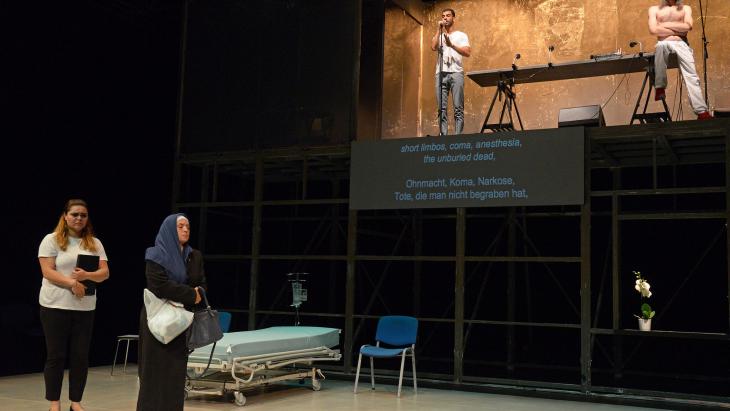 Political theatre from the Arab world five years after the Arabellion: from a country in a permanent vegetative state comes the piece "While I Was Waiting" by the Syrian playwright Mohammad Al Attar. And in "Zig Zig," an Egyptian theatre group headed by Laila Soliman tells the tale of a gang rape. By Susanne Schanda

Audiences at the Theaterspektakel in Zurich were recently treated to a split-level play by Syrian author Mohammad Al Attar and directed by Omar Abusaada. "While I Was Waiting" plays on a horizontal stage divided into two tiers. At stage level, we see a hospital room with a bed, from which the coma patient Taym quietly arises and climbs up to a gallery level. There, from on high and in the company of a jihadist turned DJ, he observes the scene taking place around his bed, where his mother sits reciting verses from the Koran. A whole range of characters make their entrances.

His sister Nada, who fled to Beirut, has returned to find out what really happened to her brother. His old buddy plays him a sentimental song on his guitar and eventually reveals that he has betrayed him. His girlfriend admits that she had an abortion following the "accident". They argue around his bedside and kiss him as if he were already dead.

It remains open as to who actually beat Taym into a coma back in early 2015. It could have been drug dealers or, just as probably, thugs from the Assad regime. From his elevated position in a state of coma, Taym recounts his hopes during the early phase of the Syrian uprising, the film that he was working on before the attack and of his yearning to leave the country. Yet, all of this is swept into the unconscious state of waiting – perhaps even waiting for death.

"While I Was Waiting" is a direct reflection of the civil war and casts a shrill light upon the damaged souls of those who survive. The multi-media production spans a full year of waiting – from early 2015 to early 2016. The stage set incorporates video recordings of demonstrations, family photos and the din of war interwoven with electronic sounds (music provided by DJ Hello Psychaleppo). The Arabic dialogue is translated into German and English using subtitles.

The oppressive family drama with its exposition of inauthenticity, betrayal and desperation also represents the state of Syria under the Assad regime, which has propelled the country into a comatose condition. For a Western audience, increasingly shocked and perplexed when confronted with the war reports from Syria, this theatrical work manages to create a reality that is within one's reach – with faces and bodies, individual life stories and family ties.

The playwright Mohammed Al Attar, born in Damascus in 1980, was forced to flee his country in 2012 and now lives in Berlin. His plays, which he frequently produces with Omar Abusaada, are performed in theatres all around the world. "While I Was Waiting" can still be seen in September in Basle, Berne and Geneva. 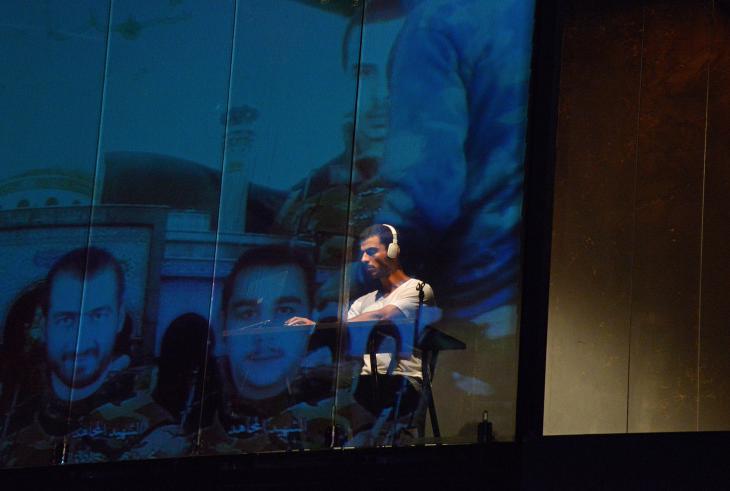 "While I Was Waiting" is a direct reflection of the civil war and casts a shrill light upon the damaged souls of those who survive. The multi-media production spans a full year of waiting – from early 2015 to early 2016, writes Susanne Schanda. Mohammad al Attar′s plays are performed in theatres all round the world

In contrast to "While I Was Waiting" from Syria, "Zig Zig" – the new production by the Cairo and Brussels-based playwright and director Laila Soliman – takes audiences back into the past. The name of the play refers to an expression used by British soldiers when, in 1919, they raped numerous women in an Egyptian village. This is how the women recall events and how they are recorded in court documents. In Egyptian history, 1919 was a year of revolution – as was 2011.

At the time, Egypt was occupied by the British, while today the country is controlled by a military dictatorship, says Laila Soliman. Although her documentary play "Zig Zig" is based on old court files, the stylised streamlined stage set and timeless costumes allow the universal validity of the work to shine through while posing the question as to whether anything has truly changed over the past hundred years.

As for the historical facts, British soldiers attacked the village of Nazlat al-Shobak in March 1919. Five villagers were killed, at least twelve women were raped and numerous houses were burned down. Villagers sued the soldiers for damages and a British military court was convened to investigate the accusations. What was unusual about this case was that twelve of the raped women overcame their shame and fear and summoned the courage to testify as witnesses.

Five tiny metal tables stand in a row on stage, each mounted with a spotlight on the side and covered with files. Four actresses quickly alternate their roles, sometimes as the judge, other times as witnesses, sitting or standing, sometimes falling to the floor recalling their agony. A musician provides live accompaniment on violin to events on stage.

"What did the soldiers say when they forced their way into your house?" the judge asks one of the young witnesses. She thinks about it for a moment and says, "My mother-in-law asked them if she could give them a couple of geese, but they said 'We want Zig Zig'." The witnesses are cornered by the cross-examination until they no longer know what to say.

A journey through time to the past

At a second temporal level, the play addresses the discovery and combing through the court documents found two years ago in the archive of the British Foreign Office. The court testimony has only been preserved in English and the play contrasts this with the experiences and ordeals of the women, expressed in spoken Arabic, whereby the actresses also include some of their own experiences with sexual violence. Two Egyptian folk songs, an American anti-war hymn and a drinking and wandering song contribute to breaching the historical perspective of the court case.

The play does not make any explicit references to recent history, such as events surrounding the Egyptian revolution of 2011. No mention is made of the scandalous "virginity tests" carried out by the military or of the gang rapes that occurred on Tahrir Square. In a talk following a performance in Zurich, Laila Soliman said that it was enough for her when audiences recalled these events while watching her play. This is a legitimate position. Nevertheless, it avoids a particularly tortuous and controversial question: is there a difference when the rapist is not a soldier from an enemy army, but rather a soldier from one's own society?

With her plays "No Time For Art" and "Lessons in Revolting" from 2011, Laila Soliman quickly and directly reacted to the political and societal events in Egypt. "Zig Zig" continues her efforts to record the developments of the Egyptian revolution under military rule. The fact that it requires a journey back one hundred years in time reflects a rather pessimistic state of affairs.

″Zig Zig″ will be performed at the FFT in Dusseldorf on 27 and 28 September 2016. "While I was waiting" can be seen in September in Basle, Berne and Geneva.

"The people aren’t ready for democracy" has been the constitutional basis for Arab tyranny, its favourite slogan and its sacred narrative for more than a century. Yet, asks Khaled ... END_OF_DOCUMENT_TOKEN_TO_BE_REPLACED

A new global database shows a significant gap in reported COVID-related deaths, suggesting the actual worldwide death toll is short by at least 1 million. That's due in part to ... END_OF_DOCUMENT_TOKEN_TO_BE_REPLACED

Two decades after the attacks of 11 September 2001, the West faces the shattered debris of its failure – not only in Afghanistan, but also in Iraq, Syria, Libya and Yemen. What ... END_OF_DOCUMENT_TOKEN_TO_BE_REPLACED

The coronavirus pandemic has turned lives upside down all over the world. In the Middle Ages, however, people lived with epidemics all the time. The best and most famous ... END_OF_DOCUMENT_TOKEN_TO_BE_REPLACED

In Ancient Egypt, the pharaohs had "solar boats" built to take them into the afterlife. One of these boats was discovered in 1954. It has now been moved to the Grand Egyptian ... END_OF_DOCUMENT_TOKEN_TO_BE_REPLACED

Attracting little attention from the world at large, Egypt's military regime has been mercilessly going after dissidents. Now, the first executions of prominent members of the ... END_OF_DOCUMENT_TOKEN_TO_BE_REPLACED
Author:
Susanne Schanda
Date:
Mail:
Send via mail

END_OF_DOCUMENT_TOKEN_TO_BE_REPLACED
Social media
and networks
Subscribe to our
newsletter