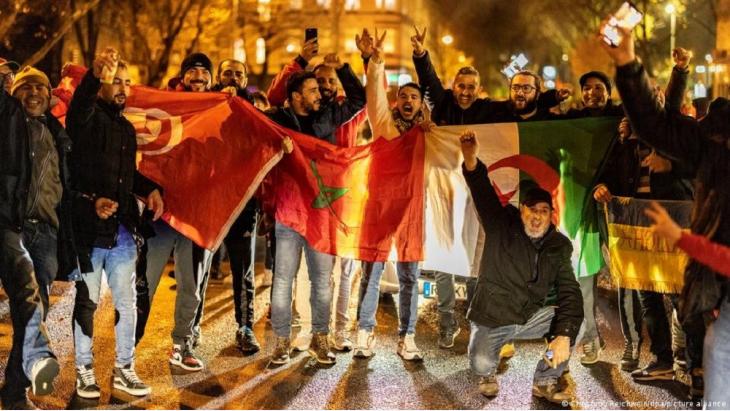 Morocco has taken the 2022 World Cup by storm, with the northwest Africans reaching the semi-finals for the first time in their soccer history. As the knockout match approaches, Birgit Svensson's public viewing report from Baghdad throws a different light on Morocco's recent victories in Qatar

Cheers on the Tigris as Youssef En-Nesry scores the decisive goal for Morocco. Now there is no holding back. The men on the lawn at the Cafe Opera in Baghdad's Adamija district no longer feel the cold that seeps into the Iraqi capital after sunset.

They leap to their feet and sing, ordering another Numi Basra tea to warm themselves and a hookah to smoke. Numi Basra are small limes that turn black as they dry and, being full of vitamin C, help protect against colds, especially in winter. Now, at the open-air public viewing, they are all the rage. The goal against Portugal is scored early on, unlike against Spain, where the match was decided by a penalty shootout. The men start discussing.

The success of Morocco's footballers, aka the "Lions of Atlas", is a source of pride for the whole of Arabia, as is the 2022 World Cup in Qatar itself. "The fact that we can host such a world event is fantastic," says one man in a black tracksuit, taking a drag on his hookah. If they wanted, they could jet off to Qatar and watch a few games. Four years ago, he had made it to Russia, but it cost him a fortune.

The apple smell of tobacco mixes with lemon and mint. Smoke hangs heavy in the air. At the back, two men are playing the Middle Eastern board game Tavli, which uses dice and stones, similar to backgammon. Café Opera, otherwise an ordinary place to drink tea and only moderately frequented, is benefiting from the World Cup like no other in Adamija. Far and wide, not a woman is to be seen. Watching football in public is obviously still very much a male affair. 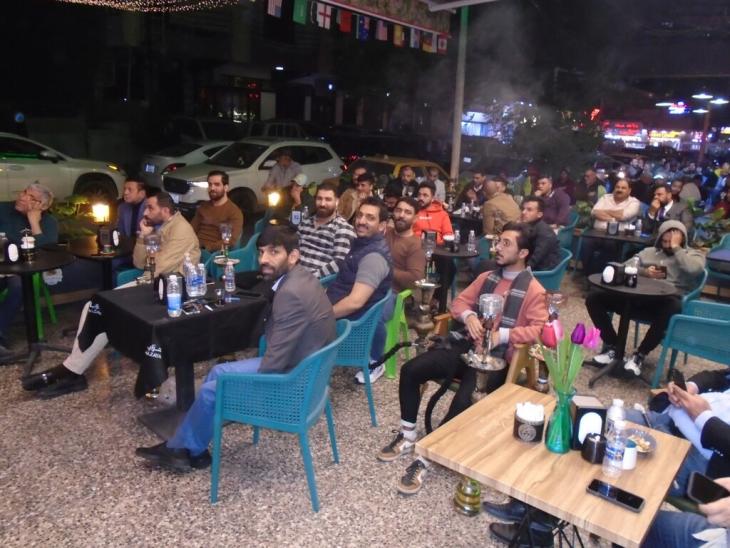 Public viewing in Baghdad: "Restaurants, cafes, fitness centres, the local bakery, the grocer's, the tobacconist's, the hotel lobby: everywhere the TV is on, everywhere a ball is rolling," writes Birgit Svensson. "Many eateries attract guests by screening the World Cup matches. When Morocco plays, the streets in Baghdad, 1200 kilometres from Doha, are empty. The otherwise constantly congested pavements along the shopping streets suddenly become passable, the few cars that remain are free to drive on. Iraqis loved football long before the World Cup came to Qatar. But they’re particularly invested now"

Public viewing is all the rage in Iraq at the moment. Restaurants, cafes, fitness centres, the local bakery, the grocer's, the tobacconist's, the hotel lobby: everywhere the TV is on, everywhere a ball is rolling. Many eateries attract guests by screening the World Cup matches. But that doesn't always work. People looking to eat out don't necessarily want to watch football. Frequently it is the places outside, where tea and hookah are served, that are full.

If you're lucky, you get a chair with a small table next to it. When Morocco plays, the streets in Baghdad, 1200 kilometres from Doha, are empty. The otherwise constantly congested pavements along the shopping streets suddenly become passable, the few cars that remain are free to drive on. Iraqis love football, and not just since the World Cup in Qatar. But now especially.

Not only in Iraq, people are rallying behind the Moroccan team across the entire, even if they usually have sympathy for Barcelona or Real Madrid and adore Cristiano Ronaldo. But now they are all Moroccans, "Maghrebians" as the Iraqis say.

The team's victories have become a pan-Arab triumph, goalkeeper Bono a figurehead. Yet Morocco and Iraq have considerable problems with each other. There are no diplomatic relations between the two countries, they avoid each other as much as possible. Sunni Islamic Morocco accuses majority Shia Iraq of sending missionaries to North Africa to spread Shia Islam.

Iraq, on the other hand, accuses the Maghrebians of sending Sunni extremists to Mesopotamia, who joined al-Qaida and later IS, and who have claimed many Iraqi lives.

But a detente is now in the offing, made possible by football. Iraq's Shia Prime Minister Mohammed al-Sudani was one of the first to congratulate the victory. And in Shia Basra in southern Iraq, students danced and sang for Sunni Morocco.

Abu Mustafa grew up in Adamija and is very attached to the neighbourhood. For the Morocco game, he met up at the Opera café with two friends from his student days. Iraq has suffered through the conflicts with its neighbours and other Arab countries like no other country in the Middle East, says the 55 year-old.

The civil war in 2006/2007 had a greater impact on Adamija than on any other area of Baghdad. Inhabited mostly by Sunnis, a concrete wall was erected around the neighbourhood back then, with only one entrance. "We were labelled as Saddamists, as resisters, as terrorists. It was as if we were living in a prison."

Qatar, he said, supported the extremists at the time, who were part of al-Qaida. Money also flowed into the pockets of the Sunni terrorists from Saudi Arabia and the United Arab Emirates. They were all afraid that the Americans' attempt at democratisation in Iraq could also spill over into their countries and topple the regimes.

"The World Cup in Qatar now, the first in an Arab country, has something conciliatory about it. And Abu Mustafa hopes that this feeling will last beyond the championship.

But it is not only between Iraq and its neighbours that football seems to be bridging divides. There is now also demonstrative unity between the host country Qatar and its neighbour Saudi Arabia. The picture from the opening night, when the Emir of Qatar sat next to the Saudi Crown Prince, went around the world.

For three and a half years, Mohammed bin Salman (MbS) led a boycott against Qatar that shook the "Gulf brothers" to their foundations. Saudi Arabia blocked the peninsula's only land link, cutting Qatar off completely from the mainland.

But rich Qatar defied its neighbours and imported everything by sea or air. Frisian cows were even imported from Germany by plane for milk production. One of the accusations of the Gulf states and Egypt against Qatar was its proximity to Iran, the arch-enemy of the Sunni Arabs.

But the embargo had exactly the opposite effect. Doha became more closely linked to Shia Tehran than ever before. When MbS realised his embargo could neither influence Qatar's economy nor its political position, he relented. Since then, a sense of "we" has dominated, a rarely known unity in a region otherwise fraught with division.

"What's up with Germany?" asks Khudair al-Obeidi, sitting next to Abu Mustafa and already on his third Numi Basra. "I never have thought they would play so bad," he sighs and everyone around him nods in agreement. The stunt with the one-love bandage and the players' hands held in front of their mouths did not go down well in Baghdad either.

"Did you have to do that?" asks Abu Mustafa. Homosexuality is a taboo in conservative Islamic Iraq, especially in public. Behind closed doors, at least in the capital, there are gay bars and also transvestites. But no one would dare to flaunt this publicly. A few years ago, youths known as emos were pelted with stones and killed in the open street.

"When you go to a foreign country, you have to adapt," says Abu Mustafa. Ten years ago, he recalls, he was in Berlin and saw none of this rainbow debate that is so all-pervasive now. He thinks it's the fault of the Americans, who impose their values on others. "But Merkel, Merkel is good," comes a comment from the back corner of the Cafe Opera. The others nod in agreement. "She took us Iraqis in when things were so bad," says a man in his mid-thirties. "We will never forget that".

Whatever the outcome of the World Cup for the Moroccans, one thing is already certain: they have bestowed a winter fairytale on the Arab world that will boost the region's self-esteem enormously.

Young women are driving forward the protests against the Iranian regime, which have been going on for months. Literature provides clues as to why that should be, and why the ... END_OF_DOCUMENT_TOKEN_TO_BE_REPLACED

Visiting the country of her parents, murdered by the Iranian regime in 1998, German-Iranian artist Parastou Forouhar finds a changed society: hopeful, strong and courageous, ... END_OF_DOCUMENT_TOKEN_TO_BE_REPLACED

Ballet performances are prohibited in Iran. In her film "1001 Nights Apart", director Sarvnaz Alambeigi documents the history of dance in the Islamic Republic. By Fahimeh Farsaie END_OF_DOCUMENT_TOKEN_TO_BE_REPLACED

Iran's president Ebrahim Raisi is overseeing an unyielding crackdown. The current situation grimly echoes his role in a purge of political prisoners in 1988 END_OF_DOCUMENT_TOKEN_TO_BE_REPLACED

Chinese President Xi Jinping's visit to Saudi Arabia in December 2022 may have rattled Washington, but it simply highlighted the Arabs’ desire to diversify their foreign relations ... END_OF_DOCUMENT_TOKEN_TO_BE_REPLACED

There are signs of an imminent normalisation of relations between Turkey and Syria. This would allow Erdogan to score political points domestically before the upcoming elections ... END_OF_DOCUMENT_TOKEN_TO_BE_REPLACED
Author:
Birgit Svensson
Date:
Mail:
Send via mail

END_OF_DOCUMENT_TOKEN_TO_BE_REPLACED
Social media
and networks
Subscribe to our
newsletter