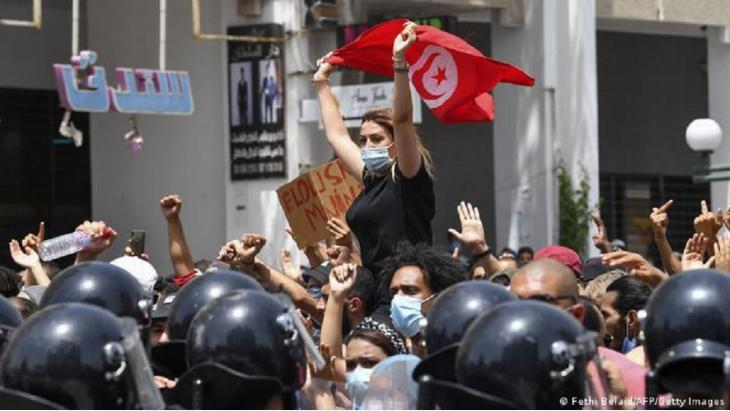 Arab world
"The people aren't ready" – can Arabs do democracy?

"The people aren’t ready for democracy" has been the constitutional basis for Arab tyranny, its favourite slogan and its sacred narrative for more than a century. Yet, asks Khaled Hroub, what chance does democracy have, unless it is repeatedly put to the test by the people at all levels of society?

It is a provocatively Orientalist question, of course, yet one that rebounds in our faces from time to time. As Hayreddin Pasha (1820-1890), one of the pioneers of the Ottoman and Islamic renaissance in the second half of the nineteenth century, famously remarked: "the ruler doesn’t want it and the people aren’t ready for it."

Of Caucasian origin, Hayreddin Pasha ended up in Tunisia as a high-ranking official in the court of the Pasha Ahmed Bey. He advocated ideas aimed at reforming the administration that were ahead of their day. And in 1857, he backed the most important document of "citizenship" in the Arab world, which gave Tunisians equal rights, regardless of anything else.

Hayreddin Pasha was convinced that education was central to the process of social advancement. He considered good education to be the basis of economic and military strength, and he worked to improve education in Tunisia. He believed freedom was prerequisite to building strong nations, and he used to say that robust societies were built by free men. He became chief minister of Tunisia in the 1870s, yet failed to translate his most important ideas into reality, and subsequently resigned. Asked why he did not implement his liberal ideas regarding suffrage and the establishment of a democratically elected government, he offered the damning indictment cited above.

A century and a half has passed since Hayreddin Pasha's harsh riposte, yet many can be heard repeating the same mantra today. Where would Tunisia have ended up, had Hayreddin Pasha fulfilled his enlightened ambition and succeeded in establishing a democratic system back then? We don’t know. But we do know that "the ruler doesn't want" democracy – nothing has changed there.

How can any society be ready for democracy unless it is able to try it out?

The tagline "the people aren't ready for democracy" has been the constitutional basis for Arab tyranny, its favourite slogan and its sacred narrative for more than a century. Many people have come to realise that this phrase is a snare and a delusion. It fails to tell us how a people can prepare for democracy without going through it, without trying and failing at it once, twice, even three times, until it becomes stronger and more durable. 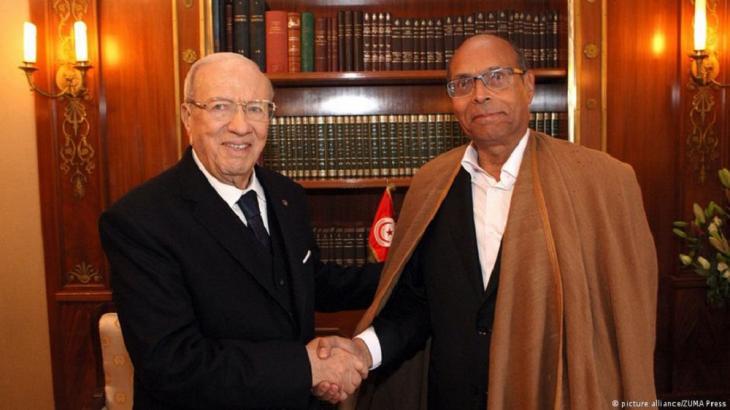 The first democratic transfer of power after the Arab Spring: at the end of 2014, Beji Caid Essebsi was elected head of the Tunisian state in the first free elections in Tunisia after the overthrow of long-term ruler Ben Ali. His political opponent Moncef Marzouki, until then interim president, conceded defeat and described the election as a "celebration of democracy in the Arab world"

What chance does democracy have unless it is repeatedly put to the test by the people, by the elite – by the different segments of society? How can it succeed unless, after each test, it is revised and any failings addressed. How can it succeed unless lessons are learned by the people, both the electors and the elected, so that it can gradually take root?

To keep repeating the same dictum (“the people aren’t ready for democracy”) merely provides cogent justification for dictators, tyrants, despots and their acolytes, both those in the open and those behind the scenes. Many others are dragged along in good faith, yet without truly understanding.

In fact, there is no magic formula for turning societies and countries from tyranny to freedom and democracy. There is no escape from the long, bitter, painful and costly journeys and struggles that come with democratic transformation. Ultimately, there has to be a starting point: one generation has to take the risk and pay the highest price for a future of freedom. Otherwise, this slogan will drag on for eternity, and we will continue to languish in the mire of tyranny.

The assertion that "the people aren't ready for democracy" implies that the elites who assume overlord status and superiority are actually wary of their own people. They don’t tell us "when" the people will be ready for democracy or "how" it will be achieved; nor do they tell us "who" will work to prepare the people. Do we really think that the tyrannical regimes will do the job themselves, and in so doing put a noose around their own necks?

Those behind this mantra do not explain to us how democracy has worked and still works in India, with a population of over one and a half billion, and in which there are hundreds of languages, religions and castes. They don't explain how democracy has operated and how it continues to operate in numerous African countries where there are disputes and rivalries between tribes and ethnic groups.

Fear of democratic change is fully justified: tribes and religious sects may present themselves as political parties, populist rhetoric may dominate for a time, large and potentially dangerous gaps may open up to outside interference, electoral and parliamentary rivalries and strife may hinder or slow development (assuming there is any development, in the first place…), and many more such scenarios.

Yet we have to get wet if we are to cross the river to the other side … the side on which free citizens are allowed to create strong and free nations.

Despotic regimes give rise to enslaved societies and individuals. We've tried them, and we're still suffering from them to this day.

Sultana Khaya, 41, has been peacefully resisting the Moroccan occupation of Western Sahara for many years. Because of her campaign to assert the self-determination of the Sahrawi ... END_OF_DOCUMENT_TOKEN_TO_BE_REPLACED

Since Spain abandoned its traditional neutrality towards the conflict in Western Sahara, Morocco has announced a "new phase" in relations between the two countries. But what is ... END_OF_DOCUMENT_TOKEN_TO_BE_REPLACED

An increasing number of government ministries in Algeria are announcing they will abandon French in future. They may be reacting to the mood among the population, but the move is ... END_OF_DOCUMENT_TOKEN_TO_BE_REPLACED

Russia's ranking on the World Press Freedom Index has fallen again over the Kremlin's wartime censorship of the Ukraine conflict. From Myanmar to Mexico, journalists continue to ... END_OF_DOCUMENT_TOKEN_TO_BE_REPLACED

"Aboogi", on the City Slang label, is the latest release from Imarhan. Hailing from southern Algeria, Imarhan are one of the many bands that have emerged from the Tameshek ... END_OF_DOCUMENT_TOKEN_TO_BE_REPLACED

END_OF_DOCUMENT_TOKEN_TO_BE_REPLACED
Social media
and networks
Subscribe to our
newsletter