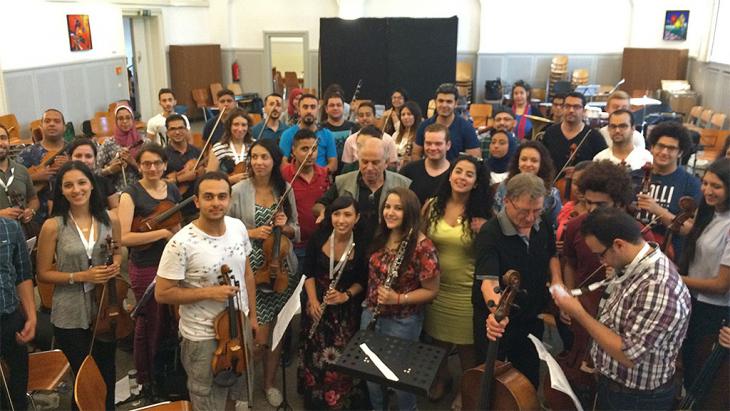 Practising against a background of explosions – for young musicians from Syria and other Arab countries, that′s the unfortunate reality. Yet recently the Arab Youth Philharmonic Orchestra gave a concert in Berlin. By Gero Schliess

For the second time since 2013, the Arab Youth Philharmonic Orchestra (AYPO) arrived this August in Berlin. With 63 young musicians from eight Arab countries, the orchestra met for a week to rehearse together before taking to the stage of Berlin′s prestigious "Konzerthaus" concert hall.

Rhamres Nooselhuda and Baghiani Redha are two of the members of the multinational orchestra. The two musicians know each other from Algeria and say they were beyond excited to have received an invitation to play with the AYPO in Berlin for the "Young Euro Classic" festival.

"Berlin is so great," they both cry out, nearly simultaneously. They seem to adore the city, remarking that it is so quiet and relaxed – in total contrast to their hectic lives back home in Batna, in Algeria's north.

The annual festival for youth orchestras invited players from around the world to attend their 17th gathering.

Rhamres and Baghiani say that the rehearsal time ahead of the concerts involved a lot of work. Under the direction of conductor Heiner Buhlmann, the young men rehearsed from morning until evening in an old school in the idyllic Berlin neighbourhood of Grunewald, a quiet place filled with villas and much greenery. The 27-year-old cellist and 25-year-old double bass player had little time to go out; unlike their contemporaries in Berlin, visits to sweaty nightclubs are not on their agenda. 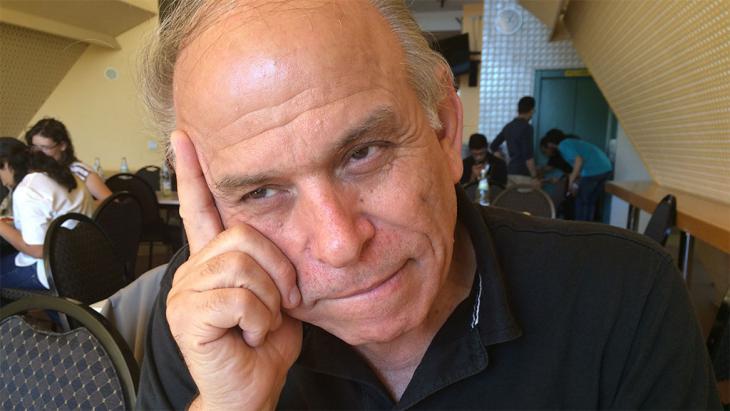 A dream come true: founder of the Arab Youth Philharmonic Orchestra is Fawzy El-Shamy, former dean of Cairo′s music conservatory. It is important to El-Shamy that musicians from a variety of Arab lands have the chance to come together and learn how to get along with each other. The diverse group includes players from Syria, Egypt, Iraq, Algeria and Kuwait

The rehearsals included compositions from Amir Khalf and Ali Osman as well as the prestigious Brahms Symphony Number 2; the programme demanded their full concentration. But for the young men, the concert was not only about music. "We are playing here for peace," Rhamres said, who explained that those in their company wanted to provide a different image of the Middle East than the one so often portrayed in the news, which mainly focuses on terror and death.

A break from the horrors of war

Hasan Obaid comes from Damascus – a place where that image of destruction and bloodletting has been at the forefront for several years. Obaid is a 21-year-old violinist studying at the University for Music and Theatre there.

"I have been stressed out from the nonstop war," admitted Hasan. The horror of the explosions and ongoing street battles has penetrated all the way into the rehearsal rooms. "My violin is with me and that helps." It's clear that music has become a means of survival for Hasan. And Berlin is something of a vacation away from the horrors of Syria. "In Germany, you get to see all aspects of life," he said, trying to put the feeling into words.

But for Hasan and the two other Syrian musicians, even obtaining the visa to come to Germany required a perilous trip from Damascus to Beirut to visit the German Embassy there. Many of those invited faced real difficulties right up until the last minute. It′s nothing short of a miracle that so many of the musicians made it to Berlin.

While Hasan is only in Germany for a week of rehearsals followed by the concert, his friend Kais, the same age, has been here for a year. Kais arrived last year as one of more than a million refugees. He travelled to Berlin from the northern Germany city of Cuxhaven where he and his brother live with a guest family on their family farm.

Kais explains that at the time he hadn't fled necessarily due to the war, but as a result of the miserable opportunities for education in Syria. The university had been in Russian hands before the start of the war, but once crisis negotiations began, the Russian professors all fled the Syrian capital. As a result the university collapsed. That's one of the reasons Kais and Hasan appreciate the week they have together in Berlin. "Syrians do not have any experience with musicians from other countries," said Kais. It is the first time they have been able to work together with musicians who are "on another level."

A diverse group of Arab musicians 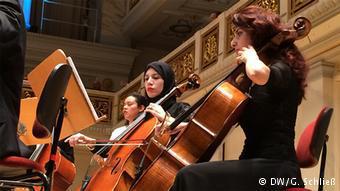 A richly symbolic performance given during the " Young Euro Classic" festival: young Arab members of the "Arab Youth Philharmonic Orchestra" on stage at the Berlin Konzerthaus

Of the 63 musicians comprising the AYPO, the majority come from Egypt. They are the best in the group, say the others. Even the founder of the orchestra, Fawzy El-Shamy, is from Cairo and was the dean of the music conservatory there. In founding the orchestra in 2006, he fulfilled a dream, he said.

It is important for him, he explained, that musicians from a variety of Arab lands have the chance to come together and learn how to get along with each other. The diverse group includes players from Syria, Egypt, Iraq, Algeria and Kuwait. Fawzy El-Shamy says that he is convinced that the members of his orchestra will be able to keep up with other young orchestras that are also performing at the Young Euro Classic Festival.

At the closing concert in the Berliner Konzerthaus on 30 August 2016, the AYPO are received with roaring applause at an almost sold-out event. Like the members of the orchestra, many concertgoers also turned out to be young and full of excitement about the event.

After the concert, it was time for the young AYPO musicians to say their goodbyes. Kais is due return to the farmhouse in Cuxhaven, but says he plans to study violin in Hamburg. Hasan, however, will have to return to Damascus – back to everyday life marked by terror and war. "Music is my life," he said, adding that he intends to fight with others to ensure that in spite of the war, art and culture survive in his homeland. He takes home with him a new feeling of community and belonging that came with working with other young musicians from Arab countries. And then there's also the unspoken desire to perhaps return to Germany one day – to a country where he can forget the war and hone his skills at a German music university.

For decades, Egypt's successive governments have neglected to provide adequate support for science and culture. Wouldn't it be wonderful if the coronavirus crisis were to lead to ... END_OF_DOCUMENT_TOKEN_TO_BE_REPLACED

Appointed to the Facebook oversight board, Yemeni Nobel Peace Prize laureate Tawakkol Karman has faced hostility from Arab state media and social media users, who accuse her of ... END_OF_DOCUMENT_TOKEN_TO_BE_REPLACED

The COVID-19 pandemic has triggered a public-health emergency and a steep reduction in oil prices, which represents a perfect storm for the Middle East, where everything from ... END_OF_DOCUMENT_TOKEN_TO_BE_REPLACED

Churches in the Middle East – Coptic, Eastern Orthodox, Maronite – typically share the conservative values of their Islamic surroundings. Yet the resistance of Arab Christian ... END_OF_DOCUMENT_TOKEN_TO_BE_REPLACED

Dubbed the "Butcher of Hama", Syria's Rifaat al-Assad is accused of embezzling millions in European real estate. Like him, many regional rulers have preferred to keep their ... END_OF_DOCUMENT_TOKEN_TO_BE_REPLACED

After a prolonged slump, tourist numbers in Hurghada had been expected to rise this year. Now there are quite literally no foreign visitors at all in the Red Sea resort. But all ... END_OF_DOCUMENT_TOKEN_TO_BE_REPLACED
Author:
Gero Schließ
Date:
Mail:
Send via mail

END_OF_DOCUMENT_TOKEN_TO_BE_REPLACED
Social media
and networks
Subscribe to our
newsletter