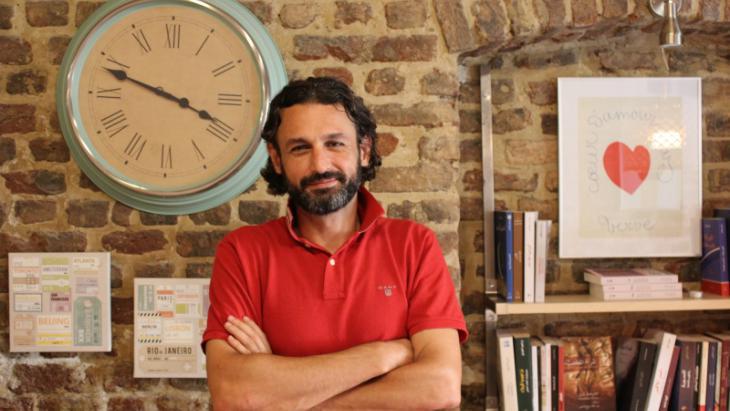 The first Arabic bookshop in Istanbul opened its doors in June. It is run by Syrian refugees, together with Turkish publishers. They want the shop to become a meeting place for Arabs and Turks. It already offers much more than just Arabic literature. Ekrem Guzeldere took a look around "Pages"

Turkey is one of the principal countries taking in Syrians who have been fleeing from war, terrorism and expulsion in their homeland since 2011. The United Nations' High Commission for Refugees (UNHCR) speaks of nearly two million Syrian refugees in Turkey. The majority of them live in the large cities near the Syrian border, like Gaziantep, Urfa and Antakya. An estimated 300,000 Syrians have sought refuge in Istanbul. A few thousand Iraqis and Arabs from other countries also live there.

Although it has almost no Arab infrastructure, Istanbul is a major "Arab city". "The Arab population of Istanbul is already large and still growing, but you can't get Arabic books. That was where the idea to open a bookshop for this section of the population came from," explains Samer Al Kadri, the founder and manager of "Pages", Istanbul's first Arabic bookshop.

Al Kadri has been living in the historic Fatih district of Istanbul with his wife, Gulnar, and two daughters since September 2013. The 41-year-old is originally from Hama, but moved to Damascus with his family following the 1982 massacre, and finished school there. "At that time, I started reading books that I found in my father's house, Arabic and international literature," says Al Kadri. Later he studied art, and in the early 1990s he worked in Damascus as a graphic artist and painter. In 1998, Al Kadri went to work for the first Arabic children's TV channel, "Spacetoon", and seven years later he founded the publishing house "Bright Fingers", specialising in children's books. 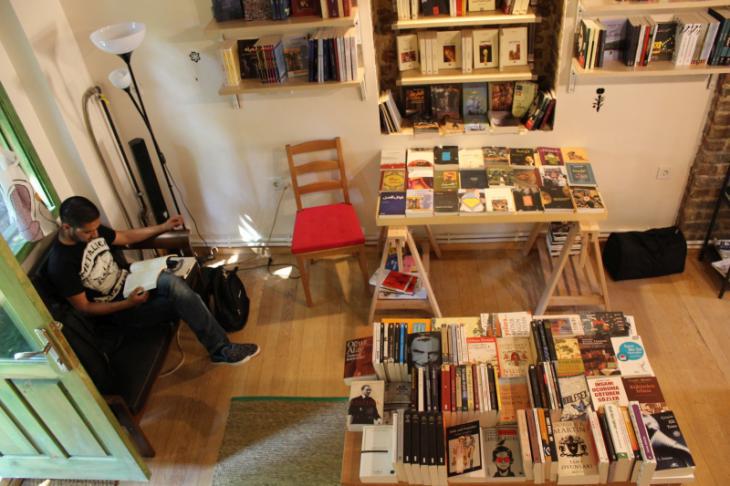 Reading allowed: in the Arabic bookshop "Pages", customers don't have to buy the books. They can borrow them for a small fee or just read them in the shop. People can also settle down in the shop's little cafe for a read if they so wish. Al Kadri is planning a future publishing house that will produce books in Arabic and Turkish, writes Ekrem Guzeldere

Al Kadri left Syria in 2012. While he and his wife were on a business trip in Abu Dhabi, security forces had searched the offices of his publishing house. He didn't return to Syria, but flew straight to Jordan, where he and his family lived for about a year. During this period, a children's book author invited him to spend ten days in Istanbul. "After just a few days, I knew I had to move here. Amman just isn't a city for children," says Al Kadri.

Right from the start, he and his family lived in Fatih, and he often went to the cafe opposite the Chora Church, which is famous for its mosaics. "While I was there, I spotted a building that would be suited to what we had in mind. We had it renovated and rented it for a year." Al Kadri's bookshop "Pages" is right behind the cafe, in a little cul-de-sac. He runs it together with seven partners: five Syrians, an Omani and a Turk. The shop has a little cafe. One floor is devoted to adult literature, one to children's books, and one to readings, workshops and events. The special thing about the shop is that customers don't have to buy the books; they can just read them in the bookshop, or borrow them for a small fee.

The destruction of a book warehouse 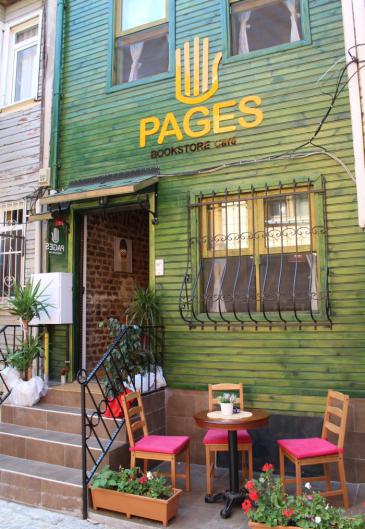 Al Kadri noticed the building near the famous Chora Church soon after he moved to Istanbul. There, he founded "Pages". The bookshop offers several floors of literature in various languages

Al Kadri now also has his "Bright Fingers" books printed in Istanbul, as his book warehouse near Damascus has been completely destroyed. He also orders fiction and non-fiction from all over the Arabic-speaking world. "I've been going to book fairs for years – I often go to Frankfurt – and I know most of the publishers personally. We then place large orders from each country."

Even so, buying books is not top of Al Kadri's agenda. "The most important thing is that we offer a meeting place for Arab culture from different countries. We want to become a cultural centre with readings, concerts, workshops and seminars – with Arabs from Istanbul, but also from abroad." This is why all the partners have other jobs: it means they aren't reliant on earning money from "Pages".

Four volunteers run the cafe, the shop's social media presence and the events. "News from Syria is always about war and terrorism, or poverty and refugees. With this shop, we want to show that we also have a culture and a literature that we want to bring to the young generation of Arabs here, as well as the people of Istanbul."

Al Kadri is planning a future publishing house that will produce bilingual books in Arabic and Turkish in order to make Arab authors accessible to Turks and vice-versa. "We don't know each other, in spite of how close we are geographically. The mentality and the culture are very similar, but language is the barrier," says Al Kadri.

Even now, two-fifths of the books are in other languages, many in Turkish, but also a few in English and French. Al Kadri lives in the old Jewish quarter, Balat, within walking distance of the bookshop. "A lot of the streets here remind me of Damascus – sometimes I almost get confused about what city I'm in." One reason the architecture of Istanbul and Damascus is so similar is that the Ottoman star architect Sinan designed buildings in both cities.

Al Kadri has settled in Istanbul. His daughters attend one of the so-called Syrian schools there, in which a modified Syrian curriculum is taught in Arabic. Due to political developments, he assumes he will be staying in Istanbul for some time to come. His whole family is now living abroad. Al Kadri's sister lives in Germany; his brother in the Netherlands. "I wanted to stay as close as I could to Syria," Al Kadri says. "The day after Assad goes – no, that same day – I'll go back to Damascus. Syria needs us."

While Bashar al-Assad is still shunned by the West, which blames him for a decade of brutal war in Syria, a shift is under way in the Middle East, where Arab allies of the United ... END_OF_DOCUMENT_TOKEN_TO_BE_REPLACED

Western states have fought against terrorism not only in Afghanistan, but also in Syria and Iraq – leaving behind people who were once their partners in fear and poverty. Hisham A ... END_OF_DOCUMENT_TOKEN_TO_BE_REPLACED

Berlin's annual Human Rights Film Festival closed at the weekend. One entry to the festival was the documentary "Captains of Zaatari". Its Egyptian director Ali El Arabi focuses ... END_OF_DOCUMENT_TOKEN_TO_BE_REPLACED

"The people aren’t ready for democracy" has been the constitutional basis for Arab tyranny, its favourite slogan and its sacred narrative for more than a century. Yet, asks Khaled ... END_OF_DOCUMENT_TOKEN_TO_BE_REPLACED

Germany’s electorate includes some 7.4 million citizens with international roots, while many more millions of residents from abroad aren’t allowed to vote. Both groups are often ... END_OF_DOCUMENT_TOKEN_TO_BE_REPLACED

International relations are shifting across the Middle East as regional powers adapt to America's retrenchment and China's growing influence. Although the region could become the ... END_OF_DOCUMENT_TOKEN_TO_BE_REPLACED
Author:
Ekrem Güzeldere
Date:
Mail:
Send via mail

END_OF_DOCUMENT_TOKEN_TO_BE_REPLACED
Social media
and networks
Subscribe to our
newsletter