The City of Fog - A Metropolis in-between Modernism and Orientalism

Casablanca has been reinvented over and over again - by Hollywood as the backdrop for a classic flick, by the French as a modern metropolis with an Oriental flair. An architectural and historical exploration of the port city with Christian Hauck 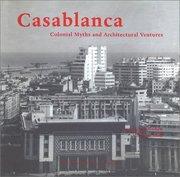 ​​The legendary film by Michael Curitz suggests that Casablanca is situated between the sea and the desert. This is, however, a cliché, given that the coastal plains are fertile and the city's port has long been exporting its grains.

The well-known author Driss Chraibi brings us up to date in the descriptions of the house of his crime novel hero Inspector Ali: "Through the bedroom window, which opens wide to the garden, the sweeping scents of jasmine and wisteria drift in. The ocean, at once both far and near, clears its throat like a clueless old man just coming to realize the infinitude of life."

"Casa" – The modern and cultural center of Morocco

On one point, however, the classic film made in the fake stage sets of the Hollywood studios was right: fog is a just as much a part of this city as its cosmopolitan inhabitants and the ocean. This modern center of the Moroccan Kingdom's commerce, transport and industry is the source of half the country's domestic product today.

In the twentieth century, "Casa", as the city is called by the locals, was bequeathed the traditional commercial center and anciet intellectual and religious capital of the country, Fes. "In Fes everyone asks where you are from and who your family is, in Casablanca you are simply who you are," so the saying goes.

Casablanca, the third largest city of North Africa after Cairo and Alexandria, and with a population of almost six million in its congested urban space, quickly became the country's largest port. Since the time of the French Protectorate, city planners have tried to fit the rapidly growing city with a modern look while preserving its traditional flair.

The blueprints of the architect Léon-Henri Prost from 1914 created the star-shaped central boulevard and installed the industrial zones in the city's eastern corner. In order to create a clear separation between the European and the Moroccan quarters and to offer immigrants more space in the city's traditional structures, in 1923 New Medina was created, the Habbous quarter.

It was a new city designed according to traditional patterns, with towers, mosques, narrow streets and fountains. Michel Écochard, who had been involved with the plans for Beirut and Damascus, became Prost's successor as city planner in the final phase of the Protectorate.

Between 1946 and 1952 he created a comprehensive plan for the rapidly growing metropolis of "Grand Casablanca." His experiences and ideas were published in Paris in 1955 under the title "Casablanca - roman d'une ville". For centuries, different cultures have come into contact in Morocco’s port cities.

Today in Casablanca, in addition to around 3000 official mosques and innumerable improvised Muslim prayer halls, there are also a few churches (six Catholic, one Evangelical, and an Anglican) and three active synagogues. The Jewish population has traditionally been strongly represented here, today about 3000 of Morocco's 5000 Jews live in Casablanca.

The European saturation of the city began in the nineteenth century. In the mid-nineteenth century, French merchants began exporting inexpensive wool and grains from Casablanca to Europe. In 1912 when France became the protectorate power in Morocco, there were 20,000 French inhabitants in the city.

The French influence manifest itself in impressive colonial-style buildings erected between 1910 and 1914, when the price of real estate sky-rocketed. In 1912 the English, Spanish, French, German and Belgian consulates were located in the old town, the "ancienne Médina." The Spaniards founded the Buenaventura Church in the Medina in 1891; it is the oldest Christian church in the city.

In the same year the Anglicans began a rival church. The old clock tower along the southern edge of the old city wall, demolished in 1940, was reconstructed in 1992 - a testament to a modern sense of time.

But Europeanization was not always accepted without a fight. Technicians from France came to Casablanca in 1907 to lay railroad tracks during the expansion of the port to make way for the transport of natural stone. The local natives planted explosives along the tracks.

Germans from the industrialist "Mannesmann" company were witnesses to the events. In August, 1907 sixty-six French soldiers landed in Casablanca. They penetrated the Porte de la Marine and entered the Medina, and then barricaded themselves in the French consulate upon discovery that they were severely outnumbered.

But the French were soon able to expand the transportation routes so that they could maximally exploit what they referred to as "useful Morocco" (Maroc utile). The city's port also grew and in 1916 the engineer Perret built the docks. When the Lafarge company cement works began production in the area known as Roches Noires, the poor working class quarter called Carrières Centrales developed alongside it.

"Bidonvilles" – The Slums of Casablanca

Every industrial settlement produced its own "Bidonville" ("canteen city," or slum). Several of the Islamists connected to the attacks in May 2003 came from the Sidi Moumen quarter, a slum near the highway that leads to Rabat.

In 1953, the famous poet Abdallah Zrika was born in Beni Msik, then one of the poorest slums in Morocco, where he lived for almost thirty years. The city administration has since gutted the quarter. Officials offered its inhabitants apartments in new housing complexes for sale at a tenth of the usual market price.

The second wave of Western influence in Casablanca began with the landing of the US American on November 8, 1942. Because the Moroccan Protectorate was governed by "non-occupied" France from Vichy under the Nazi associate Marshal Pétain, a confrontation was underway in Morocco in which American and French soldiers were facing each other off.

After a secret agreement between the United States and Admiral François Darlan, who had returned from a German POW camp earlier that year, Pétain agreed to a French-American ceasefire in Morocco. The Americans entered the city on November 10 and 11, 1942.

Two days later Darlan was recognized by Eisenhower as the de facto head of the French state in North Africa. General De Gaulle, the leader of the Résistance, had not been informed about the Allied invasion and vehemently protested to Churchill about his exclusion from the events.

Churchill, Roosevelt and the Casablanca Conference

In January 1943 the conference of Casablanca took place at the Hotel Anfa, during which Churchill and Roosevelt decided upon Germany’s complete capitulation as a war goal. The year 1943 was popularly termed the "year of the Americans."

It concluded in December with a symbolic gesture during the Islamic Festival of Sacrifice: US General Patton allowed the French General Noguès to drive with him to the festivities in his impressive, modern American car. From then on it was clear that the US would de facto decide the future course for Morocco.

Many Moroccans frequented the department stores, movie theaters, cafes and bars that sprang up after the war, enjoying the city's internationalism. Jean Orieux was witness to a cinema owner who bought a movie theater in Casablanca in 1940 for 2.5 million francs. How did the businessman intend to recoup his investment given that the city's population was starving?

The people were so enthusiastic about the movies that he brought in 250,000 francs each month - thus creating a booming business. Stars such as Josephine Baker also performed in movie theaters.

The author Driss Chraibi, who spent his youth in the Derb Soltane quarter, has admitted that he fell hopelessly in love with Ginger Rogers in 1940 when he was fourteen years old. Today there are 40 cinemas in Casablanca and thirteen venues for theater shows, from children's theater to the plays of the famous dramatist Taieb Saddiki.

The laudable book "Casablanca: Colonial Myths and Architectural Ventures" by Jean-Louis Cohen and Monique Eleb highlights various styles of architecture from art deco to classical modernism and the international style, but also focuses on working class settlements and the city's impressive gardens.

The authors hunted down a variety of documents (postcards, photos, maps, architectural drawings and hard to find literature) to include in the book. This book has sparked new discussion about one of the most interesting cases of city planning and development in the twentieth century.

The organization Casa-Mémoire, founded by the architect Jaqueline Alluchon, has been offering tours through the city center every Sunday for almost ten years. The attempt to keep the city's history alive is also being put to use in order to tackle today's problems.

After twenty years of fruitless debate about building a metro system, finally plans have solidified for an aboveground railway. It has almost been forgotten that there were electric trolley buses in the city up until the 1960s.

In April 2004 someone died among the falling ruins of the once luxurious Hotel Lincoln, which have been lying around across from the central market for years. Will the site ever be restored?

In July 1986 construction was begun for the nine hectare Grand Mosque Hassan II under the auspices of the French architect Michel Pinseau. This monumental building was the last large-scale and lasting intervention in the city's urban space.

In 1992 this highly symbolic construction was built at the site where a huge 300-meter salt water swimming pool once stood. Comparisons with the Eiffel Tower and the Statue of Liberty across the ocean are not uncommon for its 200-meter high minaret, the second highest in the world. A large street to access the mosque is now under construction after the removal of several residential buildings.

In 2002 the news hit the press that just ten years after its consecration, several grave architectonic mistakes have been discovered in its foundation - even the special concrete used for it was not strong enough to withstand the pressure of the wind and waves from the Atlantic.

According to the Bymaro/Bouygues construction company responsible for the building, the repairs will require another six million euros worth of investments.

www
Click here, to get more information on "Casablanca: Colonial Myths and Architectural Ventures" by Jean-Luis Cohen and Monique Eleb from the publishers web-site, Monacelli Press.

END_OF_DOCUMENT_TOKEN_TO_BE_REPLACED
Social media
and networks
Subscribe to our
newsletter