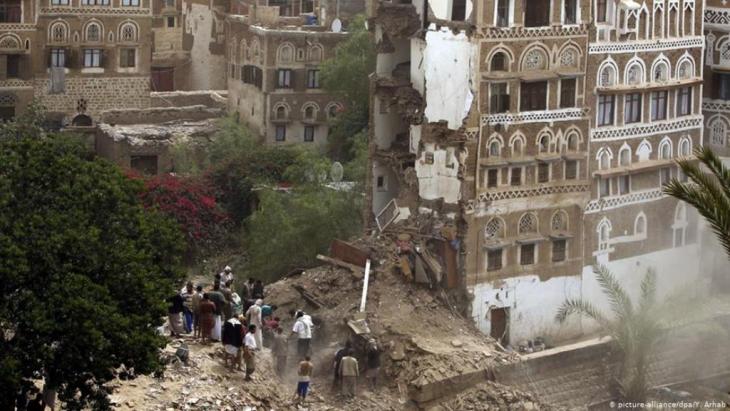 Architecture in Sanaa
As Yemen's mudbrick legacy crumbles before our eyes

Report from a disintegrating world: the early Islamic buildings of Sanaa are suffering from the effects of climate change and war. This world heritage site could be lost forever. By Paul-Anton Kruger

When Maged Tameh looks up at his house in the historic Old Town of Sanaa, Yemen’s capital city, he can see right into what used to be his bedroom. Two alcoves in the whitewashed wall, and in front of them the place where the bed once stood. The wooden beams, speckled with white, and above them the brushwood that held up the ceilings for centuries. But in August, the facade caved in and the load-bearing walls collapsed into the street at the front of the house.

Signs of this approaching calamity had been apparent for some time, says Maged Tameh. And ultimately, it was the rain that caused the collapse. Water dripped from the ceiling and welled out of the cracks. He managed to get his family to safety, along with their remaining possessions. A few pieces of furniture, cookware, clothes.

But the house where he was born, like his father and his father’s father before him, was destroyed. Maged Tameh doesn’t know if he will ever be able to rebuild it. Weeks after the accident, there is a still a heap of clay and tiles in the street, along with the plastic sheeting that he used to try to prevent the threatened collapse.

The city’s gingerbread-coloured clay tower houses, with their characteristic white decorations, have survived for centuries. But the devastating combination of climate change and war is threatening to permanently destroy this collection of 6,000 buildings, a unique jewel of early Islamic architecture that has been designated a world heritage site since 1986.

The heaviest rainfall in decades destroyed four houses completely in July and August, as Aqeel Saleh Nasari tells the Suddeutsche Zeitung. He is the spokesman for the General Organisation for the Preservation of the Historic Cities of Yemen (GOPHCY). The roofs of more than 100 buildings fell in either partially or fully. And 250 buildings required swift intervention and renovation to prevent them from collapsing in any further storms, or during the next rainy season at the latest. 5,000 of these buildings have leaking roofs – which often signals the start of their disintegration.

The floods are softening the compressed clay of the houses, which are up to 1000 years old

Climate change is exacerbating the extremes of weather in the Republic of Yemen, as it is in the other countries on the Arabian Peninsula. More than 170 people lost their lives in flooding this summer, and thousands were left homeless.

Sanaa, which lies in a basin 2,200 metres above sea level, always receives a lot of precipitation during the rainy season due to the nearby mountains, which rise to 3,600 metres in places. This is a blessing in a country that suffers from acute water shortages. But for years now, increasingly heavy storms have been breaking over the capital, leading to regular flooding. The floods are softening the compressed clay of the houses, which are up to 1000 years old. In the Old Town’s narrow lanes, the water was knee-deep, making the foundations of the houses start to slip. Cracks in the walls of more than 1000 of the tower houses, which are mostly used as apartment buildings, are an unmistakeable sign of structural problems.

The foundations of four in every five houses are already damaged, eaten away by damp, salt and microorganisms. "Eventually they are just going to collapse under their own weight," the Old Town’s former general conservator, Naji Thowabeh, told the SZ five years ago. "And when one falls, the others will become unstable." In many of the narrow streets, the houses are tightly packed together.

And then there is the war. The Saudi-led military coalition’s shells and bombs have only hit the Old Town directly on rare occasions. But the shock waves from explosions in the surrounding mountains, where the Houthi militias of the uprising have taken over the army’s bases and bunkers, are making the Old Town quake, blowing windows out of their frames. The Houthis have very recently fired shells at targets in Saudi Arabia, and after months of quiet, jets have started dropping bombs on Sanaa once again.

Home
Print
Newsletter
More on this topic
Sanaa in the 19th century: A city of gardens, Greeks and TurksConflict in the Gulf Covering: Yemen's forgotten warTreasures of the Ancient Middle East: Deciphering the first written languageThe reception of the other: Western painters of the Orient, Orientalists in the East
Related Topics
Antiquities and historical monuments, History of Islam, History of the Near and Middle East, Houthi rebels, King Salman bin Abdulaziz al-Saud of Saudi Arabia, Mohammed bin Zayed Al-Nahyan, Travels in the Orient, Yemen conflict
All Topics

Arab youth express their hopes and wishes for the New Year, spanning everything from civil and political rights, to education, to arts and culture. By Rafiah Al Talei END_OF_DOCUMENT_TOKEN_TO_BE_REPLACED

With World Cup 2022 around the corner, Qatar has embarked on a campaign to clean up its school system. Distracting from grievous shortcomings in other areas by highlighting a ... END_OF_DOCUMENT_TOKEN_TO_BE_REPLACED

Moncef Marzouki was Tunisia's first democratically elected president after the fall of dictator Ben Ali. Today he is the most prominent critic of increasingly counter- ... END_OF_DOCUMENT_TOKEN_TO_BE_REPLACED

Asef Bayat, professor of Sociology at the University of Illinois, Urbana-Champaign, has been studying revolutions and how they affect people since 1979. In his recent book, " ... END_OF_DOCUMENT_TOKEN_TO_BE_REPLACED

The catastrophic human rights situation in Bahrain is being largely ignored by the rest of the world. Despite all the damning evidence, which includes a Human Rights Watch report ... END_OF_DOCUMENT_TOKEN_TO_BE_REPLACED

The city of Marib is the most important place of refuge in Yemen for those displaced in the country. But fighting between Houthi rebels and government troops is currently ... END_OF_DOCUMENT_TOKEN_TO_BE_REPLACED
Author:
Paul-Anton Kruger
Date:
Mail:
Send via mail

END_OF_DOCUMENT_TOKEN_TO_BE_REPLACED
Social media
and networks
Subscribe to our
newsletter