The governing coalition in Armenia has suspended talks with Ankara over a normalisation of bilateral relations. It is primarily the Armenian diaspora that has threatened to withdraw all support from Yerevan if demands on Turkey are moderated in any way. Lennart Lehmann reports from Yerevan 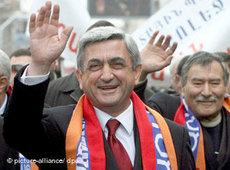 Provisional end to the reconciliation process: Armenia's president, Serge Sarkisian, announced that Turkey has made unreasonable demands that make it impossible to continue the process of rapprochement

​​Some elements of the international media recently rejoiced at the news that the head of the Armenian Apostolic Church, Catholicos Garegin II, had attended a congress of international religious leaders in the Azerbaijani capital, Baku, where he also met the Azeri president, Ilham Aliyev. Talks also apparently touched on the Nagorno-Karabakh conflict. The visit was hailed as "historic" by some commentators.

Garegin's visit also included a three-way summit with the patriarch of the Russian-Orthodox Church, Kirill, and the mufti of Azerbaijan, Allashukur Pashazade, to plead for a solution to the Karabakh question. Just two days previously, the government in Yerevan had suspended talks with Turkey; one of its reasons for doing so was the conflict over the disputed enclave of Nagorno-Karabakh.

Observers say that the main problem is that Ankara has linked ratification of a number of protocols to a solution to the Karabakh conflict – a stance that demands concessions from Yerevan. 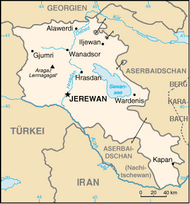 Bone of contention: relations between Turkey and Armenia are strained for a number of reasons, one of which is that Turkey supports Azerbaijan in the conflict surrounding the Nagorno-Karabakh

​​Turkey views itself as a close, long-time ally of Azerbaijan, which has been waging a bitter conflict with Armenia over the autonomous Nagorno-Karabakh region for over 20 years. Moreover, the Azeris and the Turks are ethnically related to each other.

Another obstacle to progress is that Yerevan is still waiting for Ankara to admit that the killing of Armenians by Ottoman Turks in 1915 was genocide. But although there has been some movement on this issue in recent times, Ankara still refuses to acknowledge that genocide took place. Negotiations have hit deadlock over this particular matter.

There are, however, internal policy factors, which President Serge Sarkisian may have brought into play in his decision to suspend talks with Turkey. Since the mayoral elections of May 2009, the opposition Armenian National Congress (ANC), an alliance of 18 parties also including former president Levon Ter-Petrosian, has been stepping up its challenge of Sarkisian's political legitimacy.

Its tactic is to highlight controversial events that took place in Armenia in 2008 and the government's foreign policy rapprochement with Turkey to stir up emotions among the people and to create bad feeling towards the president.

In March 2008, 10 demonstrators were killed by police in Yerevan during public rallies against Sarkisian's election victory. Numerous people are still in prison since taking part in these protests. Human rights groups are demanding the release of what they describe as "political prisoners". The powers that be in Yerevan have reacted badly to oppositional resistance, and have applied systematic pressure to elements they consider to be subversive.

Last year, Amnesty International drew attention to the harassment of journalists reporting on opposition activities. As one university lecturer told Qantara.de: "The directors of the state university threatened to sack me if I took part in any events organised by the opposition."

At the same time, the three major geopolitical players in the Caucasus – the EU, the USA and Russia – are demanding that Yerevan approaches Azerbaijan and Turkey in a bid to solve the prolonged conflict over the Nagorno-Karabakh enclave. 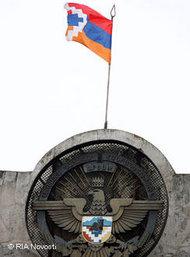 When the Armenian majority in the region declared Nagorno-Karabakh's independence from Azerbaijan in 1991, a bloody war broke out; although a ceasefire has been in place since 1994, the conflict remains unresolved

​​Nevertheless, says David Petrosian, political analyst and journalist at the Noyan Tapan news agency, all three rely on Serge Sarkisian: "In doing so they are propping up a regime of dubious legitimacy. At the same time, they are increasing Sarkisian's dependence on the international community. That reduces any room he might have to negotiate with Ankara and Baku."

"The ANC," says David Petrosian, "enjoys no support from the West, because its position is not anti-Russian."

Although the country's economy would definitely stand to gain if the border with Turkey was reopened, there are also groups in Armenia that profit from the nation's current isolation.

"Civil servants, the military establishment and businesspeople who share the same political views encounter no difficulties on account of the closed border," writes Armen Grigorian, an Armenian national working at the Central Asian Caucasus Institute in Washington. "On the contrary, economic advantages in exchange for political loyalty create opportunities to make a quick buck. And as for the military, for the time being it benefits more from the unresolved Nagorno-Karabakh conflict."

Political pressure from the diaspora

Another important factor is the Armenian diaspora. Most Armenians in Western Europe and the USA are descendants of the survivors of the 1915 genocide. They are unyielding in their insistence that Turkey admits to the massacre and issues an apology.

The Armenian national budget is extremely dependent on lobby work and financial aid from Armenians living abroad. Diaspora groups have repeatedly threatened Yerevan with the withdrawal of all support should demands for an unambiguous admission of guilt from Turkey be watered down.

"The more Sarkisian responds to the demands of Washington, Moscow and Brussels, the more he moves himself into domestic policy isolation and shores up the opposition," says David Petrosian in analysis.

The Armenian president seemed to realise this in the run-up to official remembrance ceremonies to mark the 95th anniversary of the Armenian genocide. Now, instead of forging ahead with the Ankara reconciliation dialogue, he is again focusing efforts on securing his own power base at home.

Turkish-Armenian Rapprochement
The End of a Long Beginning
A dialogue between Armenians and Turks on the Armenian genocide appears to be an impossible prospect – but academics on both sides are showing that the opposite is the case. Wolfgang Gust reports

END_OF_DOCUMENT_TOKEN_TO_BE_REPLACED
Social media
and networks
Subscribe to our
newsletter