At the same time as the massacre of the Armenians around 1915, the Ottoman army drove hundreds of thousands of Armenians into the Syrian desert. Today, some 80,000 descendants of survivors live in Syria. Charlotte Wiedemann has visited them 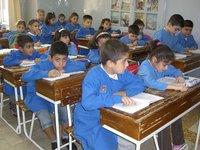 Armenian schools in Aleppo teach lessons in Arabic and Armenian. Under the dictatorship of Bashar al-Assad, religious minorities have been granted a relatively large number of rights

​​In the centre of the town of Deir az-Zour, the "Holy Church of the Armenian Martyrs" with its massive sandstone façade is a memorial to the massacre of the Armenians. It was built with private money, although it is under the protection of the Syrian state. There are glass cabinets with bones and skulls, and labelled containers with Turkish earth from the Armenians' homeland.

Deir az-Zour on the Euphrates was the endpoint of the Armenians' death march. Unknown numbers of people died in the Syrian desert, although many women and children were rescued by Bedouin.

In a school in Aleppo, the doors of the schoolrooms are open, children's voices can be heard in the corridor, from one direction there's a choir singing in Armenian, from the other a choir singing in Arabic. The school in the prosperous Azizaya quarter, which takes children of primary and secondary age, is one of sixteen Armenian schools in Aleppo.

The 1,400 children speak Armenian in the breaks, as they do at home. The classes follow the state curriculum and are mostly held in Arabic. Armenian is only taught in additional classes, but most Armenian parents still prefer to send their children to an Armenian school.

Aleppo: the Armenian centre in Syria

Aleppo is the capital of the Syrian Armenians. Forty thousand of the 80,000 who live in Syria live here. It is a small part of the Syrian mosaic of religious and ethnic groups, but its history makes it special. It is a history which unites the community towards the outside world; inside the community however they have their own mosaic, both in religion and politics.

Seven of the sixteen Armenian schools in Aleppo are Armenian-Orthodox, four are Armenian-Protestant, three are Armenian-Catholic, two, say insiders, are funded indirectly by political parties. The nationalist Tashnak party is influential in the Orthodox schools.

According to Syrian criteria, the Armenians are well integrated. Others who prefer to see integration as assimilation might say that the Armenians have a perfect parallel society.

The 26-year-old art teacher Maggie Zobian embodies many of these contradictions. She's a good-looking, self-confident woman who speaks five languages, including the Turkish her great-grandmother spoke. Her Arabic sounds so Syrian that she performs from time to time in Arabic television series. Maggie Zobian uses the same form of words to describe herself as many young Armenians: We are the fourth or fifth generation "since".

She is proud that the Armenians have become an important part of Syrian society, and she expresses her patriotism by saying: "We defend Syria as if we were Syrians – for example, when someone abroad says that it's not safe here."

There's no doubt in her mind that she will marry another Armenian. "I can't imagine anything else," she says. "My children should be Armenians." If she meets Armenians from France, she sees them as French. "They've lost their Armenian-ness, because they don't practice it as a living culture."

She does not feel upset that the Syrian government avoids the use of the term "genocide" out of diplomatic consideration for Turkish feelings: "What the government does is enough for us," she says. "We can talk Armenian on the streets."

The significance of the homeland

A few houses further along is the club of the Armenian youth movement. Opposite is an elegant hairdresser owned by an Armenian, all around there are doctors plaques with Armenian names. All the same, the secretary of the youth club uses the term "diaspora".

Some twenty young people are attending a leadership workshop for the Armenian scouts. They are fashionably dressed and have stylish haircuts. One participant answers a question as to the particular Armenian leadership virtues: "We have to educate the children not to forget their home towns. That's important because we are so far away from home."

The president of the Armenian protestants, Haroutine Selimian, has little patience with such slogans. He is now middle-aged, and his parents and grandparents always used to say, "We're going back to our historic home", they never referred to it as "Turkey", it was always the "historic home"! "This diaspora psychology has marginalised us," he says. "Spiritually, we've lost two generations as a result."

The temptation of foreign lands

Selimian seems more like a manager than a cleric. He heads the supervisory board of the Aleppo College, an Armenian-owned girls' school. Most of the pupils are Muslims whose parents like the fact that, unlike other private schools, the Aleppo College is not coeducational, and their girls do not have to sit with boys.

According to the law, non-Armenians may not learn the Armenian language at school – to prevent Christian missionary activity. Outside school however, Muslims can take private lessons in Armenian.

"That's the unique Syrian model," says Selimian. "It maintains the peace between the religions." He is only worried about the number of talented young Armenians going to Europe or Beirut to study. "I want to keep them in Syria," he says. "I want to set up an Armenian university here in Aleppo." So far that is just a dream – and another variety of Armenian integration.

The Armenian Genocide
The Search for Truth and the Historical Context
Questions about the young Turkish Republic and the Armenians are still causing waves ninety years later. Now historians who are trying to reconstruct the historical context are increasingly being paid heed. Jürgen Gottschlich reports

Turkey and Armenia
"This Is None of Europe's Business"
The Armenian Genocide has increasingly become a factor in Turkey's EU accession talks. In Turkey, even high-ranking officials say the EU position is a typical attack of Western arrogance on Turkish national pride and honour. Dorian Jones reports

The Kurds of Syria
An Insecure Stone in the Syrian Mosaic
The various ethnic and religious groups in Syria live relatively peacefully together. But many Kurdish Syrians find themselves stateless in their own country. Manuela Römer reports that they do not feel part of the so-called "Syrian mosaic"

END_OF_DOCUMENT_TOKEN_TO_BE_REPLACED
Social media
and networks
Subscribe to our
newsletter