Armenians in Turkey
A Feeling of Powerlessness

About two years after the assassination of the prominent Turkish-Armenian journalist Hrant Dink, many Armenians are sceptical about the chances of being given equal status in state, society, and the eyes of the law. Günter Seufert sends us this report 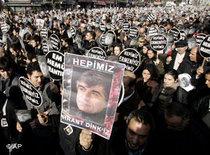 "We are all Hrant Dink! We are all Armenians!" demonstrators in Istanbul showing solidarity with Hrant Dink, the Turkish-Armenian journalist who was assassinated on 19 January 2007

​​ Only about 60,000 Armenians live in Istanbul. Almost all of them hail from Anatolia and are descendents of those who survived what the Armenians refer to as the "Great Catastrophe", the massacre of their people in Asia Minor during the First World War.

"Ever since, the Armenians have been suffering the trauma of the genocide, and the Turks have been plagued by the paranoia of the accused," was how Hrant Dink, the Turkish-Armenian journalist who was murdered two years ago in Istanbul, summed up the situation. Dink wanted to overcome the negative relationship that bears down on both peoples like a common yoke.

The small Armenian community in Istanbul carries the tension between Turks and Armenians in their souls. This tension should be used as the ferment for a new future together.

Nevertheless, many Armenians in the diaspora were convinced that there was no talking to the Turks. In Istanbul too, Dink was very much in the minority with his opinions. The bullets from the gun fired by the 17-year-old unemployed man who shot Dink in the back on 19 January 2007 seemed to prove this sceptical majority right.

However, only four days later, several hundred thousand people paid their last respects to Hrant Dink and took to the streets shouting "We are all Armenians!" These were the first fruits of Dink's efforts to bring about reconciliation.

​​ Today, this process has spread deep into Turkish society. Four Turkish intellectuals got the ball rolling. In late 2008, they apologised to their "Armenian brothers" for the fact that their state continues to justify, play down, or even draw a veil of silence over the massacre of Armenians 90 years after the fact. Said Professor Baskin Oran who helped write the short petition text: "Hrant Dink extended his hand to us."

The military and the government, however, immediately labelled the apology "treason against the Fatherland", the public prosecutor launched investigations, and the country's largest political parties spoke of a plot against Turkey. Nevertheless, some 29,000 people responded to the unprecedented call made by the intellectuals and signed the petition that read: "Our consciences no longer allow us to ignore the suffering of our brothers."

Voices from the diaspora

The declaration was very well received among the Armenian diaspora in France, the USA, and even at the other side of the world in Australia. The Paris-based journalist and essayist Jean Kehayan wrote to his "Turkish brothers" saying that for the majority of French Armenians, this is not about "ridiculous demands for land or compensation".

Patrick Azadian, an Armenian journalist in Glendale, California, echoed the sentiments of Hrant Dink, writing that the dreadful past should not be allowed to be the sole determinant of the future of both peoples.

​​ Armen Gakavian, president of the Turkish-Armenian dialogue group in Sydney, Australia, also responded. He is currently drafting a declaration of support in which the Armenians of Australia are distancing themselves from the murders committed by the ASALA, the Armenian Secret Army for the Liberation of Armenia. In the 1970s, the ASALA killed over 60 people during attacks on Turkish diplomats.

It is only among the Armenians in Istanbul, where the process of opening up actually began, that hardly anyone is speaking out on the subject. The "Armenian brothers", to whom almost 30,000 Turks expressed their sympathy, are saying nothing.

"I know that almost every statement requires an answer," writes Karin Karakasli almost apologetically. Aydin Engin, a close friend of Hrant Dink, whose ran Dink's newspaper, Agos, in the weeks after his death, explains what many of those who signed the petition feel: "At a time like this we need Hrant Dink. He would have known what words to use," says Engin.

Thus far, silence has reigned. After all, the Armenians of Istanbul do not think much of politics. Surveys indicate that less than 2 per cent of them are politically active in any way. This is not surprising considering that Istanbul's Armenian community feels powerless against the state.

Like the country's Jews and Greeks, they still cannot join the civil service. Moreover, for very many Turks, the word "Armenian" is synonymous with an insult.

At the height of the state's war on the Kurdish PKK in the 1970s, the incumbent Minister of the Interior, Meral Aksener, described PKK leader Öcalan as "Armenian spawn".

In 1955, the ruling government incited the mob in Istanbul to organise pogroms against the homes and businesses of ethnic minorities. Even as far back as the 1930s, the young Turkish Republic caused massive economic problems for the middle classes by imposing special taxes on them.

"The ease with which Hrant Dick got involved in public affairs meant that for a few years, the Republic became home to us young Armenians," says Karin Karakasli. "The older generation, however, viewed the whole thing with suspicion, and after the murder of Hrant Dink, the community battened down the hatches once again. Today, one in two would emigrate if they could."

That being said, there are some Armenians in Istanbul who have come out of hiding. The first political court case against Hrant Dink's son Arat has begun; Markar Esayan writes a political column in the daily newspaper Taraf; Hayko Bagdat is the first Armenian to broadcast a critical radio programme in Turkey; and Rober Koptas publishes Armenian literature for the publisher Aras. All four are very young and were influenced by Hrant Dink's social and political ideas.

The exact opposite is the case in the patriarchate of the Armenian Apostolic Church: Patriarch Mesrob Mutafyan, the second-most important voice of the Turkish Armenians, has been laid low for several weeks now and can no longer discharge his duties.

He is suffering from posttraumatic stress disorder. Just like Hrant Dink, Mesrob Mutafyan has for a long time been the target of death threats, insults, and vilification. He has been living under police protection for years.

Günter Seufert has been working as a journalist and writer in Istanbul for almost 20 years. Until 2001, he was head of the Istanbul branch of the German Oriental's Society's Orient Institute.

Nationalism and the Judiciary in Turkey
Hrant Dink's Son Sentenced for "Denigrating Turkishness"
Arat Dink, the son of the Turkish Armenian journalist Hrant Dink who was assassinated in January of this year, has been given a one-year suspended sentence for reprinting an interview his father in which he spoke of the Armenian genocide. A commentary by Aydin Engin

First Anniversary of the Shooting of Hrant Dink
Article 301 and the Honour of the Turkish Nation
On 19 January 2007, the Turkish-Armenian journalist Hrant Dink was shot on the street in broad daylight. Article 301 played a considerable role in the events surrounding his murder. One year on, Ankara wants to amend the controversial article. Semiran Kaya reports from Istanbul

Hrant Dink's Last Column
"The Pigeon-like Unease of My Inner Spirit"
Hrant Dink's last article was published in the Armenian-Turkish newspaper "Agos" on 10 January 2007. The column documents the blatant failure of large parts of the Turkish judiciary

END_OF_DOCUMENT_TOKEN_TO_BE_REPLACED
Social media
and networks
Subscribe to our
newsletter