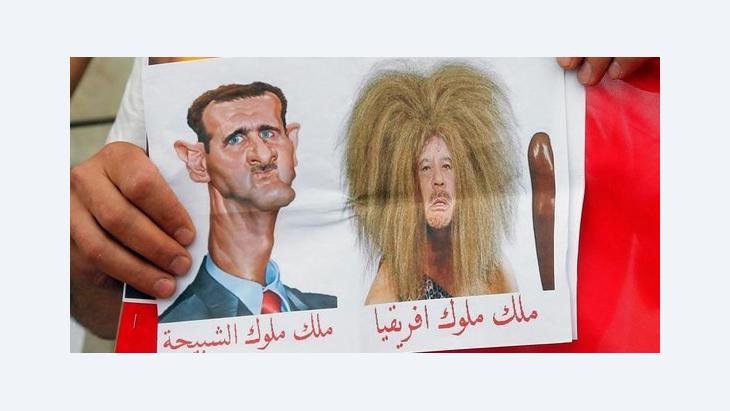 In Syria, a diverse cultural protest movement is rebelling against the Assad regime in a way that is both subtle and open. Charlotte Bank reports

For a year now, people in Syria have been taking to the streets to demand their civil rights. This was a revolution of the marginalized right from the outset, an expression of discontent from ordinary people whose hopes for a better life have been repeatedly dashed in recent years – people tired of watching as the rich elite, most of them close to the Damascus regime, acquired more and more wealth.

In Syria, artists and intellectuals expressed their solidarity with the demonstrators at a very early stage, although they were not necessarily the driving force behind the anti-Assad rebellion.

As the Syrian filmmaker Hala Alabdallah says, "this is truly a revolution from the people and of a people waking up after 40 years of repression." The battle is taking place on a great variety of fronts: on the streets and squares of Syrian cities, in homes and in the virtual world.

The protests in Syria appear in a totally different guise to recent rebellions in Egypt and Tunisia. In these Arab nations, it was above all the concentrated masses of people on the streets and squares that eventually brought about the dictators' fall. In Syria on the other hand, demonstrators were forced right from the outset to choose new forms of protest, as large gatherings of people in central locations would have been an easy target for the army and security forces. 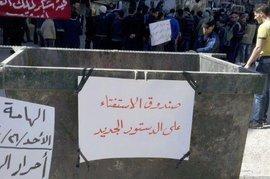 Ballot box as rubbish tip: Protest against Assad's constitutional reforms in the Syrian city of Hama

​​Inventiveness and creativity were called for as a consequence. In Syria, people have relied primarily on the surprise effect. Both intellectuals and ordinary Syrians have so far been actively involved in these creative forms of resistance.

For example on Youtube, aside from the copious footage showing atrocities committed against people, there are numerous short videos commenting on the day's events or reflecting the hopes of the population. One film, a production in performance style, presents the latest constitutional referendum as a farce, as voters throw their completed ballot papers directly into the bin (instead of into the ballot box).

There are also videos that take aim at the official versions and reports issued by Syrian state media. Filmed in the style typical of undercover journalism, another video shows a "terrorist cell" entering into the fray with projectiles made out of aubergine and okra.

The blood-red fountains of Damascus

Alongside the virtual productions, there have also been regular stunts staged in the public domain. In one particular protest action, red paint was tipped into the fountains of Damascus. This stunt was repeated several times until the authorities were finally forced to shut off the water supply.

On other occasions, the presidential palace was "fired upon" with a laser gun, activists rolled table tennis balls emblazoned with inflammatory slogans down Qassioun Mountain, and balloons affixed with liberation messages have frequently been released into the sky. Music, singing and dancing quickly became key sustaining elements of the resistance, thereby helping it to attain a new dimension – with entire streets pulsing to the rhythms of the collective "Dabke" folk dance.

Amateur songwriter Ibrahim Qashoush found fame with the song "Yalla irhal ya Bashar!" ("Get out Bashar!"), which became the soundtrack to the mass protests in Hama in early July last year. The artist was found murdered a short time later.

But although the regime was able to eliminate the author of the song, it could not erase his work. His song advanced to become the unofficial hymn of the revolution and could be repeatedly heard during the demonstrations, sometimes blaring out from cassette recorders that had been hidden in garbage cans in several Syrian cities.

As the work of anonymous groups of activists, actions such as these are examples of how the protests in Syria have led to a rediscovery of the public arena as a place for the (re-) negotiation of ideas. The public arena quickly became a forum for political debate and the articulation of collective projects for freedom and civil rights. The streets and squares were reclaimed by the people.

Politicization of the public arena

The contrast with earlier use of public spaces could hardly be greater – previously, everyone moved unobtrusively and with great caution through public areas, always vigilant and always with a sense of being observed at every step.

Most activists are still operating anonymously. They either hope for the anonymity provided by the larger mass of people, or use collective or code names. Demonstrators often appear hooded. And many women who would normally not wear a veil are covering their faces during rallies.

The dangers that can lurk if one is too open in one's support of the rebellion are evident from the cases of Ibrahim Qashoush and Ali Farzat. The cartoonist, who sided openly with the revolution, was attacked and beaten up in August last year. Both his hands were deliberately broken. After Qashoush was killed, his murderers ripped out his vocal cords.

As these cases show, the protection of anonymity is still important. And it is this protection that gives the creative Internet activists their freedom. This freedom allows the establishment of collectives such as "Abou Naddara", which has accompanied the revolution from the outset with short films, consciously rejecting violence and instead attaching importance to artistic qualities.

The group "Masasit Mati", whose satirical finger puppet theatre is now known internationally, can also only exist through the protection afforded it by the virtual world. It is this world that enables artists, filmmakers and Internet activists to speak a new, clearer language. Previously, they were forced to package their socially critical, political productions in metaphors and symbols to dodge the censor.

Reflective works on the theme of the revolution from established artists and filmmakers are still few and far between. Several of them have however, occasionally under a different name, produced short works to declare their solidarity with Assad's opponents. They often revert to the simplest technical methods, which in turn reflects the changed visual culture as it has been influenced by the activists' videos.

There are also several larger projects currently in the planning. The journalist and filmmaker Mohammad Ali Atassi is working on a project exploring the special role of the Internet communication service Skype in the Syrian revolution.

Another project by a group of artists operating anonymously presents a series of portraits of Syrian cities that have had to pay a high price for their involvement in the rebellion. The city portraits were filmed very sensitively, the wounds inflicted on the places and people shown very scrupulously. The films focus on the people and their hopes, recollections and disappointments.

Following the brutal bombardment of Homs, there is little scope for optimism at present. Many people believe that the worst is yet to come. What is certain is that Syria has experienced irrevocable change, that the Syrians have rediscovered themselves. Or as a young filmmaker put it: "Syria has been transformed. Now you go into a café and everyone is cursing loudly about the government. The crippling fears of the past have disappeared!"
Little more than a year ago, this would have been unthinkable. But if Syria's dreams of liberation are to be realised, it's still too early to say just how high a price the nation will have to pay.

A lot is happening in Syria’s Sweida Governorate – foreign intervention there is unprecedented both in terms of scale and number of actors – yet Damascus remains the dominant ... END_OF_DOCUMENT_TOKEN_TO_BE_REPLACED

When she ascended the throne, millions of Muslims still lived under British rule. Later, Elizabeth II appealed for tolerance in a multi-religious society. She was the first ... END_OF_DOCUMENT_TOKEN_TO_BE_REPLACED

The documentary "The Other Side of the River" shows how women in the Kurdish regions of northern Syria fight for their rights under the most difficult conditions. By Aviva ... END_OF_DOCUMENT_TOKEN_TO_BE_REPLACED

Following months spent considering a military incursion into northern Syria, Turkey now appears to want talks with Syria to ensure security and the return of refugees. From ... END_OF_DOCUMENT_TOKEN_TO_BE_REPLACED

In this essay, renowned Lebanese journalist and writer Hazem Saghieh asks whether the Arab Levant, which stretches from Iraq in the east to Egypt in the west, will remain an ... END_OF_DOCUMENT_TOKEN_TO_BE_REPLACED
Author:
Charlotte Bank
Date:
Mail:
Send via mail

END_OF_DOCUMENT_TOKEN_TO_BE_REPLACED
Social media
and networks
Subscribe to our
newsletter